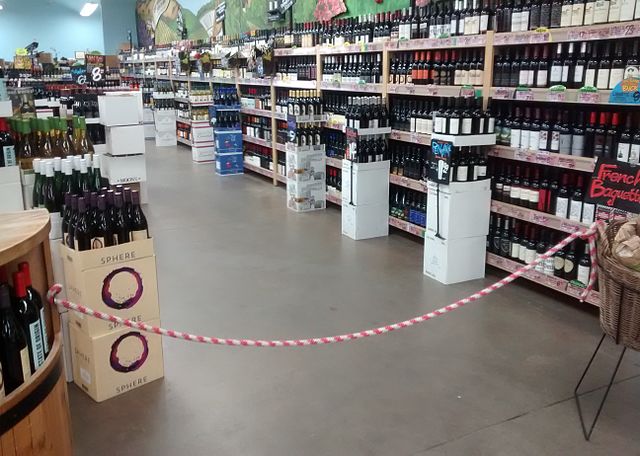 The alcohol section of a Trader Joe's store in Chapel Hill, North Carolina on a Sunday morning in 2016. The section is roped off for compliance with North Carolina's blue laws prohibiting the sale of alcohol on Sunday mornings. In McGowan v. Maryland (1961) the Court found that the law limiting business operations on Sundays did not violate the establishment clause of the First Amendment.(Image via Mx. Granger on Wikimedia Commons, CC0, 1.0)

McGowan v. Maryland, 366 U.S. 420 (1961), is one of the leading Supreme Court decisions involving Sunday blue laws that limit the businesses that can operate on Sundays. The Court found that the laws did not violate the establishment clause, setting the precedent that laws with religious origins are constitutional if they have a secular purpose.

Employees were arrested for selling forbidden items on a Sunday

The case, decided on the same day as Two Guys From Harrison-Allentown, Inc. v. McGinley (1961), Braunfeld v. Brown (1961), and Gallagher v. Crown Kosher Super Market of Massachusetts (1961), arose when seven employees, including Margaret M. McGowan, of a discount department store in Maryland were arrested for selling forbidden items on a Sunday. At the time, the state maintained a statute prohibiting retail of all but a few items on a Sunday. McGowan and the other defendants were convicted in a state trial court. The Maryland Court of Appeals affirmed the convictions. The defendants then appealed to the Supreme Court, which granted review.

Writing for the majority, Chief Justice Earl Warren denied that the laws requiring the Sunday closing of a discount department store (or limiting the sale of most items) violated the establishment clause of the First Amendment or the equal protection clause of the Fourteenth Amendment. Because the individuals challenging the law had not provided evidence of their religious beliefs, Warren denied that they had standing under the free exercise clause, but he did think they had standing to bring a case under the establishment clause, and he addressed the majority of his opinion to this issue.

Warren’s opinion is notable for recognizing that the early purpose and effect of Sunday blue laws were to aid religion, but he noted that over time more secular objections had prevailed and that such laws were now often supported by “labor groups and trade associations” and by Christian religious groups. He found it significant that such laws had continued in Virginia even after the adoption of the Virginia Statute for Religious Liberty that Thomas Jefferson and James Madison had advocated. After reviewing this history, he said that he accepted the determination of the Maryland Supreme Court “that the statutes’ present purpose and effect is not to aid religion but to set aside a day of rest and recreation.”

Justice Felix Frankfurter filed a concurring opinion, joined by John Marshall Harlan II, which is perhaps more notable for its extensive length and exhaustive attention to historical precedents than for advancing new arguments (the Court’s own headnote calls the opinion “elaborate”). Frankfurter did grapple somewhat more directly with arguments that blue laws unfairly penalized those who set aside another day for worship.

Justice William O. Douglas wrote a stinging dissent, giving this issue even more attention. Starting from the assumption that the First Amendment applied equally to state and national governments, Douglas said, “I do not see how a State can make protesting citizens refrain from doing innocent acts on Sunday because the doing of those acts offends sentiments of their Christian neighbors.”

Citing the majority’s distinction between beliefs and conduct, he observed that “it is a strange Bill of Rights that makes it possible for the dominant religious group to bring the minority to heel because the minority, in the doing of acts which intrinsically are wholesome and not antisocial, does not defer to the majority’s religious beliefs.” He thought that the law created an improper establishment of religion because it had “the sanction of law behind it.”