By Jane E. Kirtley
Other articles in Legal Terms and Concepts Related to Speech, Press, Assembly, or Petition, Freedom of the Press issues and topics 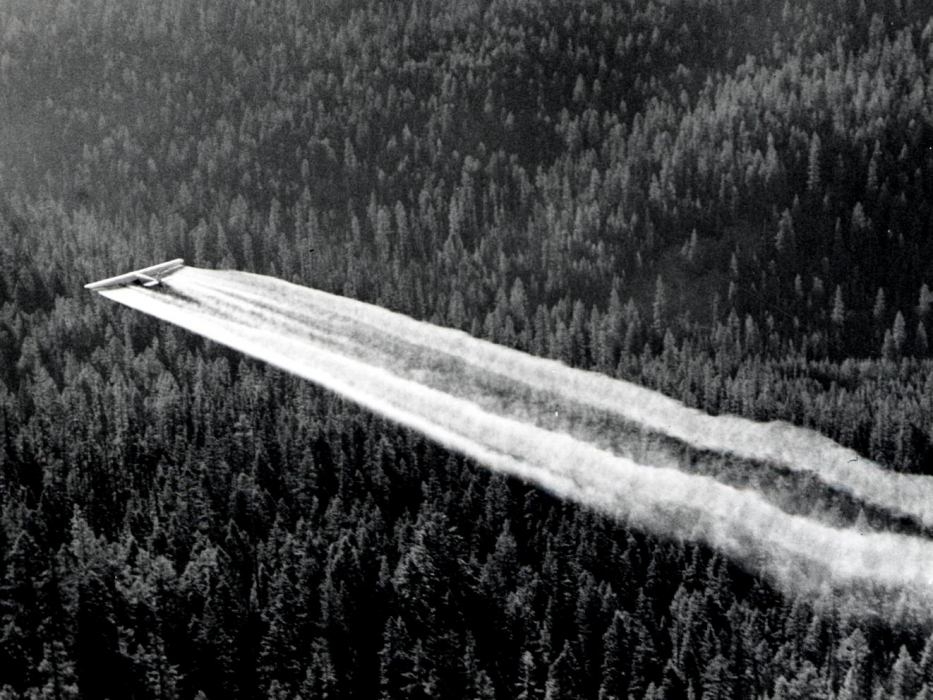 A libel case involving the safety of the pesticide DDT led the U.S. Court of Appeals for the Second Circuit to reverse lower court rulings against the New York Times and articulate a doctrine of neutral reportage. The New York Times had published statements from the National Audubon Society questioning the good faith of scientists who defended the safety of DDT, which had been used to reduce malaria carried by insects but also had been found to have detrimental environmental impacts. The court said "when a responsible, prominent organization like the National Audubon Society makes serious charges against a public figure, the First Amendment protects the accurate and disinterested reporting of those charges, regardless of the reporter's private views regarding their validity." (Photo of USDA Forest Service spraying DDT over Oregon in 1955 to control spruce budworm, public domain)

The doctrine of neutral reportage protects from libel claims media organizations that accurately and objectively report newsworthy charges made by prominent groups against public figures as part of an ongoing controversy.

The doctrine was first articulated by the Second Circuit Court of Appeals in Edwards v. National Audubon Society (2d Cir.1977).

This privilege resembles the common law privilege of fair report, which immunizes republication of defamatory statements made in the course of an official action or proceeding, such as in court.

As the Edwards court observed, the media should not be discouraged from publishing or airing newsworthy information, even if it has serious doubts about its truth, when the newsworthiness stems from the fact that the statements were made by an authoritative source. Because it is in the interest of the media to keep the public informed about controversies, the media should not be required to “take up cudgels against dubious charges in order to publish them,” the court noted.

Supreme Court has not ruled directly on neutral reportage privilege

Although the Supreme Court has not ruled directly on the neutral reportage doctrine, Justice Harry A. Blackmun, in his concurring opinion in Harte-Hanks Communications v. Connaughton (1989), observed that the media defendant may have been “unwise” not to assert the neutral reportage privilege in its appeal. He suggested that “were this court to adopt the neutral reportage theory, the facts of this case [involving charges of “dirty tricks” against a political candidate] arguably might fit within it.”

Several lower federal courts have rejected the privilege. In Dickey v. CBS Inc. (3d Cir.1978), the appeals court found it inconsistent with the Supreme Court’s ruling in St. Amant v. Thompson (1968), which allowed a plaintiff to prevail in a libel suit if the plaintiff could establish that the publisher of a statement had serious doubts about its truth. That court also cited the high court’s rejection of the “newsworthiness” test promulgated in Rosenbloom v. Metromedia, Inc. (1971) and in Gertz v. Robert Welch, Inc. (1974), which shifted the focus to the plaintiff’s status rather than the content of the publication.

States have considered the privilege. Illinois courts are split on the issue, which has not been addressed by the state’s supreme court. The California Supreme Court explicitly rejected neutral reportage in Khawar v. Globe International, Inc. (Calif. 1998).

Although courts in Pennsylvania and Illinois have recognized the doctrine, they have also observed that it is not necessary in cases in which actual malice is not proven. In Martin v. Wilson Publishing Co. (R.I. 1985), the Rhode Island Supreme Court, without adopting the privilege, emphasized that it would not apply in a case in which the statements were rumors of unknown origin. By contrast, in Burns v. Argus Association (Vt. 1981), the Vermont Supreme Court suggested that protecting even an anonymous rumor would be consistent with the Edwards philosophy of shielding newsworthy accusations regardless of their truth.

The viability of the neutral reportage privilege will depend on a careful balancing of the First Amendment interest in disseminating information on ongoing controversies against the reputational interests of the people involved in those controversies.

This article was originally published in 2009. Jane E. Kirtley is the Silha Professor of Media Ethics and Law at the Hubbard School of Journalism and Mass Communication, University of Minnesota, where she also directs the Silha Center for the Study of Media Ethics and Law. From 1985-1999, she was the Executive Director of the Reporters Committee for Freedom of the Press. She is the author of the Media Law Handbook published by the U.S. State Department.