By Joseph W. Roberts
Other articles in Legal Terms and Concepts Related to Speech, Press, Assembly, or Petition 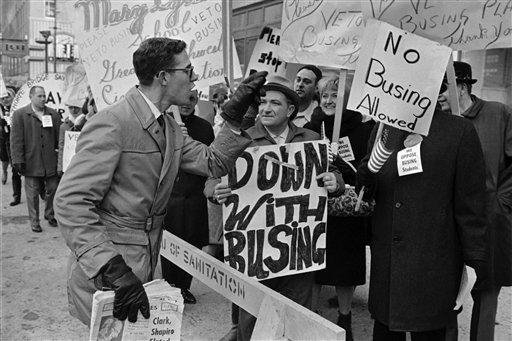 Under First Amendment jurisprudence, laws restricting speech are subject to scrutiny by the courts to ensure that they are neutral. Government restrictions on speech based on subject matter are not considered neutral. One Supreme Court case regarding speech neutrality was Police Department of Chicago v. Mosley (1972). In this case, the Court struck down a Chicago ordinance that prohibited picketing or demonstrations within 150 feet of a public school, except for picketing related to labor disputes. The suit was brought by postal employee Earl Mosley, who regularly protested peacefully against a school’s perceived racial discrimination against black students. The Court said the ordinance was not content-neutral. In this photo, a heckler points at signs carried by pickets opposing proposed busing of black pupils into less-crowded schools in white neighborhoods in Chicago in 1968. (AP Photo/Charles Knoblock, used with permission from the Associated Press)

Under First Amendment jurisprudence, the government cannot restrict ideas that are unpopular, divisive, hateful, or otherwise offensive. Laws restricting speech are therefore subject to scrutiny by the courts to ensure that they are neutral — that is, they do not discriminate against speech that government officials disfavor.

Viewpoint and content discriminating laws are subject to strict scrutiny

Over the years, the Supreme Court has based various rulings on content neutrality. In Police Department of Chicago v. Mosley (1972), the Court examined a Chicago city ordinance that prohibited picketing or demonstrations within 150 feet of a public school, except for picketing related to labor disputes. The suit was brought by postal employee Earl Mosley, who regularly protested peacefully against the school’s perceived racial discrimination against black students. Justice Thurgood Marshall wrote the majority opinion of the Court in which he suggested that “[t]he central problem with Chicago’s ordinance is that it describes permissible picketing in terms of its subject matter. . . . Above all else, the First Amendment means that government has no power to restrict expression because of its message, its ideas, its subject matter, or its content.”

In Regan v. Time, Inc. (1984), the Court considered whether Time’s regular publication of images of U.S. currency in its various magazines violated U.S. law, even though the law did allow images meeting certain criteria to be published for specific uses. Time, Inc. sought a judgment that the particular section (504) of the U.S. Code at the center of the case infringed on free speech. Justice Byron R. White, in delivering the majority opinion, noted that “504’s purpose requirement is unconstitutional. It cannot be sustained as a valid time, place, and manner regulation because it discriminates on the basis of content in violation of the First Amendment.”

At issue in R.A.V. v. St. Paul (1992) was a St. Paul, Minnesota, ordinance that restricted the burning of crosses or the display of Nazi swastikas to “arouse anger, alarm or resentment in others on the basis of race, color, creed, religion or gender.” After a juvenile was charged with burning a cross on the lawn of a black family, the ordinance was challenged as unconstitutional. Writing for the majority, Justice Antonin Scalia reasoned that the law was unconstitutional because it did not include similar restrictions based on other matters such as political affiliation, union membership, or homosexuality.

Generally, laws that negatively affect speech are valid if they serve other legitimate governmental interests. For example, in Carey v. Brown (1980) the state of Illinois attempted to restrict all picketing of residences or other dwellings except that targeting an employer for labor issues. Justice William J. Brennan Jr. delivered the majority opinion of the Supreme Court, which struck down the Illinois statute because it permitted certain speech but denied all other and therefore engaged in unlawful content discrimination. Justice Brennan declared: “When government regulation discriminates among speech-related activities in a public forum, the Equal Protection Clause mandates that the legislation be finely tailored to serve substantial state interests.”

Content-neutral regulations often seek to regulate behavior or conduct with just an incidental impact on speech. Generally, they are subject only to intermediate scrutiny. One example is the regulations applied to nude dancing. In City of Erie v. Pap’s A.M. (2000), the Supreme Court examined an Erie, Pennsylvania, ordinance that prohibited public nudity with the intention of eliminating Kandyland, a nude dancing establishment. Justice Sandra Day O’Connor delivered the plurality decision of the Court, ruling that the city ordinance was “aimed at combating crime and other negative secondary effects caused by the presence of adult entertainment establishments like Kandyland and not at suppressing the erotic message conveyed by this type of nude dancing.” Many First Amendment experts, however, question the secondary effects doctrine and fear it enables government officials to characterize truly content-based laws as merely content-neutral.

This article was originally published in 2009. Joseph W. Roberts, Ph.D is Associate Professor of Politics and International Relations at Roger Williams University in Bristol, RI. Dr. Roberts serves as an editor of the Journal of Political Science Education. Dr. Roberts specializes in comparative politics, international relations, and human rights. He also regularly teaches and lectures on American politics particularly on political rights.