By Gary Bugh
Other articles in Legal Terms and Concepts Related to Speech, Press, Assembly, or Petition, Freedom of the Press issues and topics 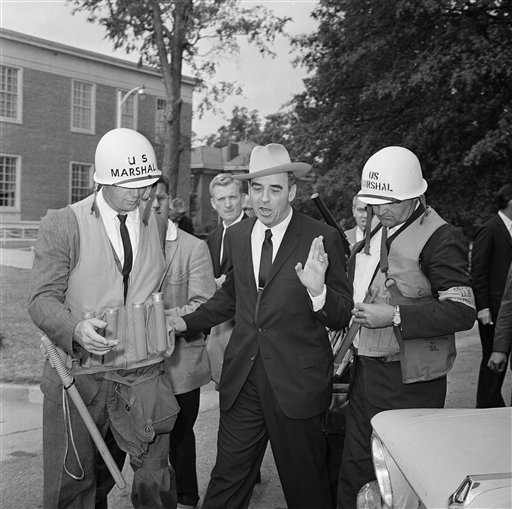 Through a series of rulings, the Supreme Court has defined who must show actual malice to win damages in a libel suit. For example, in 1962, the Supreme Court said that Edwin Walker was a public figure who must meet the higher standard given "his personal activity amounting to a thrusting of his personality into the ‘vortex’ of an important public controversy." Walker was a former U.S. Army general who opposed using federal troops to enforce racial integration in public schools. He sued the Associated Press for libel when it published that he had led a riot against U.S. marshals at the University of Mississippi. In this photo, U.S. marshals lead Walker off the Mississippi campus in 1962. (Associated Press, file)

In libel cases, plaintiffs who are public figures or officials have to meet a more stringent standard (actual malice) than do private citizens (negligence) if they are to collect damages. Thus, the status of a defamation plaintiff often affects the outcome of cases, as the courts balance the right of free press against an individual’s reputation.

When it comes to printed defamation (libel), courts have ruled that public figures, including government officials, have the burden of proving that defendants libeled them with actual malice.

In New York Times Co. v. Sullivan (1964), a case involving an Alabama official’s attempt to collect for false statements published in a 1960 civil rights advertisement, the Supreme Court reversed the libel award because the plaintiff had not established that “actual malice” motivated the inaccurate descriptions.

With this standard, a public official must show that the defendant made a libelous statement with “knowledge that it was false or with reckless disregard of whether it was false or not.”

Public officials not just those in elected positions

In Rosenblatt v. Baer (1966), the court elaborated that public officials include not just those in elected positions, but also people who work for elected officers. The court extended the actual malice rule of Times v. Sullivan to public figures in Curtis Publishing Co. v. Butts (1967) and Associated Press v. Walker (1967).

Although the court made some rulings — notably Time, Inc. v. Hill (1967) and Rosenbloom v. Metromedia, Inc. (1971) — that did not protect private citizens from libel if the facts published were deemed newsworthy or of public interest, in the 1974 Gertz decision and in Time, Inc. v. Firestone (1976), it provided greater protection for individuals who had not voluntarily placed themselves in the public eye.

Unlike public figures, private individuals do not have to prove actual malice to win damages for libel.

More recently, “involuntary public figure” status has developed in lower court decisions, such as Dameron v. Washington Magazine (1985), which refers to someone involved in an event of overriding societal importance (in this case, an air traffic controller at the time of a major plane crash). Overall, though, private citizens have more protection from libel than do public figures and public officials.