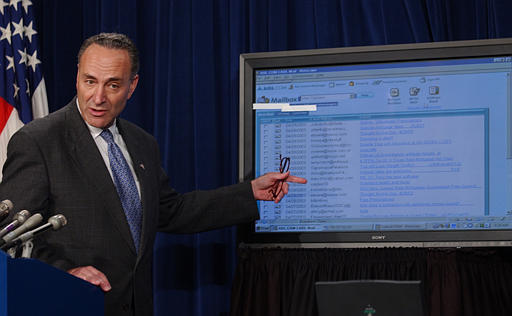 Spam is an unsolicited e-mail sent to a computer user to gain business, sell a service, or communicate a message. Regulation of spam, like regulation of telemarketing, raises First Amendment free speech issues. In this photo, Sen. Charles Schumer highlights the "spam" e-mail he received on his personal e-mail account during a news conference on Capitol Hill in 2003. Schumer sponsored legislation proposed at reducing the number of unsolicited emails consumers receive. (AP Photo/Susan Walsh, used with permission from the Associated Press)

Spam is an unsolicited e-mail sent to a computer user to gain business, sell a service, or communicate a message. Because of the vast number of such messages and their content, Congress is under growing pressure to regulate spam in much the same way it regulates telemarketing. But regulation of spam, like regulation of telemarketing, raises First Amendment free speech issues.

Spam became popular in the 1990s

In the 1990s, more and more people turned to e-mail for business and personal communication, and the Internet became a popular conduit for marketing. Much in the same way that telemarketers were able to use new telephone technology to reach more people, companies and organizations began to use bulk e-mail (spam) as an inexpensive method of marketing and communication. Some surveys now estimate that spam constitutes as much as 50 percent or more of all e-mail.

Spammers may represent legitimate businesses, but often they do not, such as those who send sexually explicit messages. One problem is that spam can be sent anonymously, under fictitious or temporary e-mail addresses, and from locations far outside the United States.

Governments have attempted to regulate spam

The federal and state governments have made several attempts to regulate spam. The federal Controlling the Assault of Non-Solicited Pornography and Marketing Act (CAN-SPAM) of 2003 requires unsolicited commercial email messages to be labeled and to include opt-out instructions and the sender’s physical address. The act also prohibits the use of deceptive subject lines and false headers in such messages. On September 27, 2004, Nicholas Tombros became the first spammer to be convicted of violating the CAN-SPAM Act. The law, though, is largely unenforceable against anonymous or non-U.S.spammers.

Governments have tried to address adult content in spam

Another approach to regulating spam is to address the adult content of the Internet. The federal Communications Decency Act of 1996 banned the transmission of obscene or indecent communications to persons under 18 years old. However, in Reno v. American Civil Liberties Union (1997) the Supreme Court ruled that the act violated the First Amendment. Similarly, in Ashcroft v. American Civil Liberties Union (2004) the Court invalidated the Child Online Protection Act on First Amendment grounds. In the act, Congress sought to criminalize the transmission of material harmful to minors. But the Court ruled that the act burdened the speech rights of adults.

Nearly 40 states have passed laws regulating spam. Some laws require would-be spammers to label their messages as spam. And some focus on spam of an adult nature; they require spammers to include “ADV-ADLT”in the message subject line.

Overall, spam is viewed as an Internet and e-mail nuisance, but for now the government seems unable to control it through regulation.