By Stefanie Kunze
Other articles in Laws and Proposed Laws, Pre-First Amendment 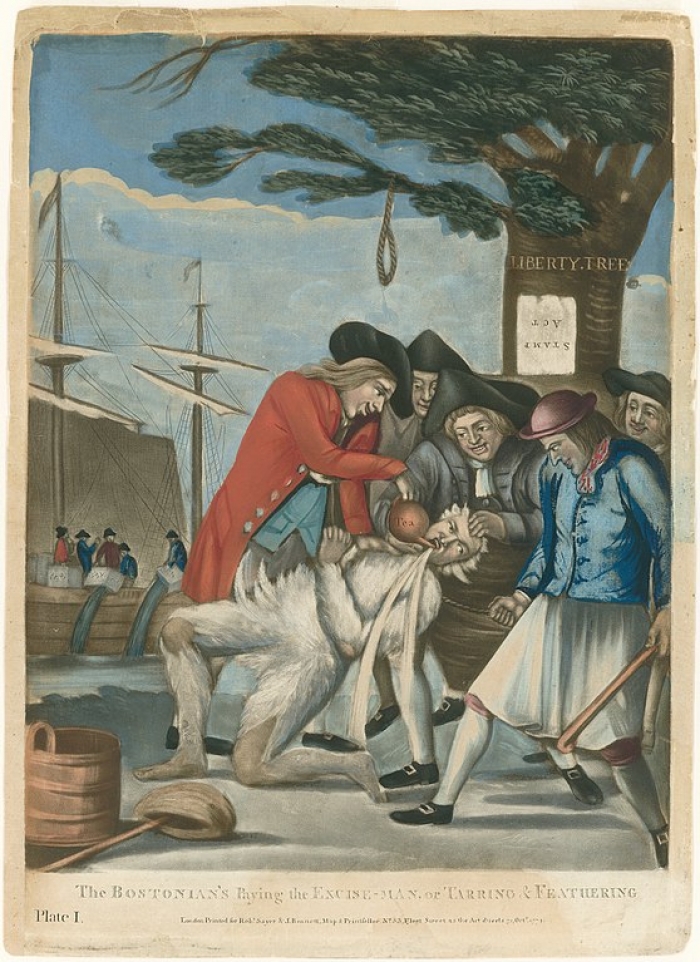 This 1774 print shows Boston colonists pouring tea down the throat of a loyalist official whom they have tarred and feathered. Tax commissioners were commonly threatened with tarring and feathering when they tried to enforce the Stamp Act of 1765, which imposed a tax on all papers and official documents in the American colonies. The aftermath of the Stamp Act influenced constitutional safeguards and the First Amendment. (Print by Philip Dawe via Wikimedia Commons, public domain)

The Stamp Act of 1765 was ratified by the British parliament under King George III. It imposed a tax on all papers and official documents in the American colonies, though not in England.

Included under the act were bonds, licenses, certificates, and other official documents as well as more mundane items such as plain parchment and playing cards. Parliament reasoned that the American colonies needed to offset the sums necessary for their maintenance. It intended to use the additional tax money to pay for war expenses incurred in Great Britain’s struggles with France and Spain.

The American colonists were angered by the Stamp Act and quickly acted to oppose it. Because of the colonies’ sheer distance from London, the epicenter of British politics, a direct appeal to Parliament was almost impossible. Instead, the colonists made clear their opposition by simply refusing to pay the tax.

Prominent individuals such as Benjamin Franklin and members of the independence-minded group known as the Sons of Liberty argued that the British parliament did not have the authority to impose an internal tax. Public protest flared and the ensuing violence attracted broad attention. Tax commissioners were threatened and quit their jobs out of fear; others simply did not succeed in collecting any money. As Franklin wrote in 1766, the “Stamp Act would have to be imposed by force.” Unable to do so, Parliament repealed the Stamp Act just one year later, on March 18, 1766.

The colonists may well have accepted the stamp tax had it been imposed by their own representatives and with their consent. However, the colonists’ emerging sense of independence — nurtured by the mother country and justified by their multiple interactions with other trading nations — heightened the colonists’ sense of indignation and feelings of injustice. Even had they submitted to it, there is little doubt that many would have been troubled by the negative impact of a tax on the free press.

Scholars contend that the American separatist movement gained a great deal of influence as a result of its success in protesting the Stamp Act.

The act and the violence that erupted with its passage remained fresh in the young country’s memory. The crafters of the Constitution were careful to include safeguards against usurpations of freedom and the violence such acts could breed. Article 5 provides for a constitutional amending process, allowing for changes in the laws without resort to violent revolution.

This article was originally written in 2009. Stefanie Kunze has a PhD in Political Science and is a Lecturer in the Department of Sociology at Northern Arizona University. Dr. Kunze specializes in perpetrators of ethnocide, and more specifically Native American experiences with settler colonialism.