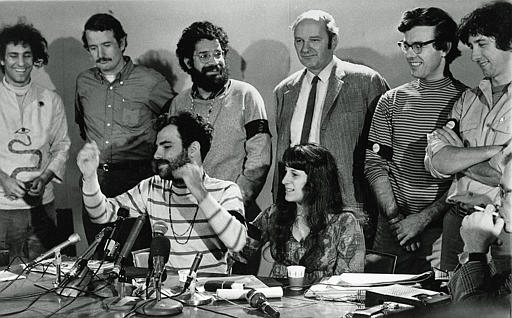 The Chicago Seven defendants hold a news conference in Chicago, Ill., during their 1969 trial on charges of conspiracy to riot at the 1968 Democratic National Convention. From left, standing, are: Abbie Hoffman, John Froines, Lee Weiner, Dave Dellinger, Rennie Davis and Tom Hayden. Seated is defendant Jerry Rubin, with his girlfriend, Nancy Kurshan, who was not part of the trial. (AP Photo, Reprinted with permission from The Associated Press)

Of all the trials that emerged from the turbulent period of protest surrounding the Vietnam War, probably none received more attention than the 1969 trial of the Chicago Seven by federal district court judge Julius Hoffman.

The trial flowed from a series of demonstrations that had taken place in Chicago in conjunction with the Democratic National Convention held there in 1968. Mayor Richard Daley had hoped to use the convention to showcase his city, but anti-war protestors had a different idea.

On several successive nights, they defied a curfew in city parks, sparking confrontations with local police, who many observers believed were just as responsible for the rioting as the demonstrators. The confrontations distracted attention from events at the convention itself.

A grand jury initially indicted Rennie Davis, David Dellinger, John Froines, Tom Hayden, Abbie Hoffman, Jerry Rubin, Bobby Seale, and Lee Weiner. Most of them were affiliated with the National Mobilization to End the War in Vietnam (MOBE) or with the Youth International Party, whose members were known as the Yippies.

Bobby Seale, who was bound and gagged by the judge for his courtroom antics, was later separated from the case and jailed for contempt, thus leaving only seven defendants.

Although the seven might better have been tried under municipal breach of the peace statutes, the Nixon administration decided instead to use the Anti-Riot Act, a provision tacked on to the Civil Rights Act of 1968. (It had been adopted in part in response to the riots that followed the assassination of Dr. Martin Luther King Jr.)

A number of prominent Americans — including Noam Chomsky, Harvey Cox, Nat Hentoff, Christopher Lasch, Norman Mailer, and Benjamin Spock, dubbing themselves The Committee to Defend the Conspiracy — placed an advertisement in the New York Review of Books, arguing that the law threatened the First Amendment by “equating organized political protest with organized violence.” The committee observed that prosecutors made little attempt to distinguish the defendants who had advocated violence from those who had favored peaceful protests.

5 of Chicago Seven convicted of intent to incite a riot

In court, the defendants, represented by civil liberties attorneys William Kunstler and Leonard Weinglass, continued the political theater in which they had engaged during the convention, provoking Judge Hoffman, already openly biased, to react with open animosity against them.

The jury ultimately dismissed conspiracy charges but convicted five of the defendants with the intent to incite a riot.

The Seventh Circuit Court of Appeals voided the incitement convictions on the basis that the judge had improperly limited the voir dire of the jurors, had expressed open bias against the defendants, and had bugged the phones of the defendants’ counsel. It voided the contempt citations on the ground that they required jury trials.