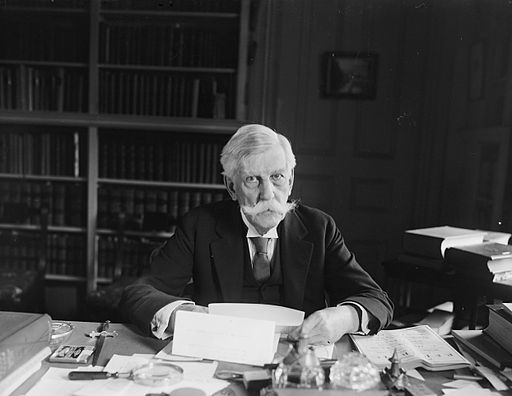 Socialist Charles T. Schenck was charged with violating the Espionage Act of 1917 when he circulated a flyer that opposed the draft. The Supreme Court upheld his conviction. Pictured is Justice Oliver Wendell Holmes who ruled in the case that the danger posed during wartime justified the restrictions on First Amendment rights to freedom of speech placed by the Espionage Act. (Photo available from the Library of Congress, public domain)

Congress enacted the Espionage Act of 1917 on June 15, two months after the United States entered World War I. Just after the war, prosecutions under the act led to landmark First Amendment precedents.

The Espionage Act of 1917 prohibited obtaining information, recording pictures, or copying descriptions of any information relating to the national defense with intent or reason to believe that the information may be used for the injury of the United States or to the advantage of any foreign nation.

The act also created criminal penalties for anyone obstructing enlistment in the armed forces or causing insubordination or disloyalty in military or naval forces.

By 1918, in actions that seriously threatened First Amendment freedoms and that likely would not be upheld today, 74 newspapers had been denied mailing privileges.

In 1917 the socialist Charles T. Schenck was charged with violating the Espionage Act after circulating a flyer opposing the draft. In Schenck v. United States (1919), the Supreme Court upheld the act’s constitutionality. Writing for the majority, Justice Oliver Wendell Holmes Jr. held that the danger posed during wartime justified the act’s restriction on First Amendment rights to freedom of speech.

Although Congress repealed the Sedition Act of 1918 in 1921, many portions of the Espionage Act of 1917 are still law.

Daniel Ellsberg, a former defense analyst who leaked the famous Pentagon Papers to the New York Times and other newspapers, faced charges under the Espionage Act, and went to trial in Los Angeles in 1973. The judge eventually dismissed charges against him and his colleague Anthony Russo.

Two former lobbyists for the American Israel Public Affairs Committee (AIPAC) were charged with violating the Espionage Act of 1917 in August 2005. The charges were ultimately dropped in 2009.

In more recent years, former CIA analyst Edward Snowden was charged with violating the Epionage Act after he leaked classified documents related to the National Security Agency's widespread surveillance program in 2013, beginning with The Guardian. Many news outlets published the information from the documents, including the New York Times, Washington Post and NBC News. Snowden sought asylum in Russia, but could be prosecuted under the charges if he returned to the United States.

In May 2019, a federal grand jury in Virginia issued an indictment against Wikileaks founder Julian Assange that included 17 counts of violation of the Espionage Act for receiving and publishing classified documents. Three of the counts are based exclusively on the act of publishing, which some have said could have implications for mainstream U.S. media publications who also sometimes publish classified material.