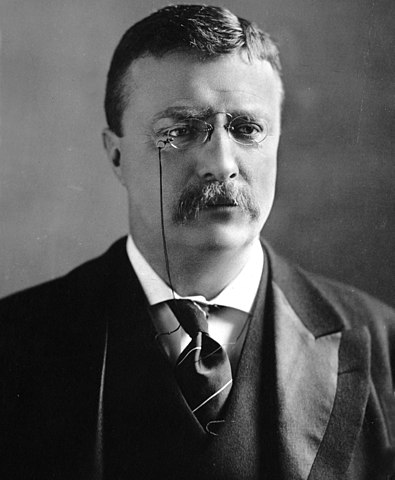 It was the election of Theodore Roosevelt (pictured here) that resulted in the the first federal effort to regulate campaign finance in U.S. elections: the Tillman Act of 1907. The Act banned corporations from expending money from their treasuries to influence a federal election. Campaign contributions are now recognized as a form of speech partly protected by the First Amendment. (Image via Library of Congress, 1902, public domain)

The Tillman Act of 1907, the first federal effort to regulate campaign finance in U.S. elections, banned corporations from expending money from their treasuries to influence a federal election. Campaign contributions are now recognized as a form of speech partly protected by the First Amendment.

Campaigns were unregulated before Tillman Act

Before passage of the Tillman Act, U.S. political campaigns were unregulated. But with the rise of industrialization in the nineteenth century and of corporations seeking to influence government policy, money and politics went hand-in-hand.

During the 1904 presidential election, Democrat Alton B. Parker alleged that corporations gave incumbent Republican president Theodore Roosevelt large sums of money in exchange for influence on administration policies. Although Roosevelt denied the charge, investigations held after the election found that corporations did make huge contributions to the Republican campaign. In response, Roosevelt called on Congress to enact campaign finance reform in 1905, and the spotlight shifted to a bill introduced five years earlier by Republican senator William E. Chandler of New Hampshire.

Chandler’s bill had sought to prohibit federally chartered corporations and companies that engaged in interstate commerce from contributing to any campaign—federal, state, or local. His bill also sought to prohibit any contribution by corporations to congressional campaigns. Yet Chandler’s bill failed to garner any support until after he retired and Roosevelt issued the call for campaign finance reform.

The bill eventually introduced was sponsored by Sen. Benjamin R. Tillman, a Democrat from South Carolina, who declared that Americans viewed their elected representatives as “instrumentalities and agents of corporations.” After revisions in the House, the bill banned campaign contributions by corporations and banks chartered by the federal government. It was signed into law in 1907.

The Tillman Act, which remains in effect today, includes a broadly defined concept of “contribution or expenditure”—a factor that, along with the act’s weak enforcement provisions at the time of its passage, allowed businesses and corporations to find loopholes in the law. For example, even though “any thing of value” was considered to be part of the definition of a “contribution or expenditure,” corporations continued to donate office space, typewriters, and free travel to members of Congress. In addition, company workers were often kept on the company payrolls while working exclusively for a congressional representative’s campaign.

Like the Tillman Act, recent Supreme Court decisions related to campaign regulations, such as Buckley v. Valeo (1976) and McConnell v. Federal Election Commission (2003), allow greater control over contributions than over expenditures. And yet, efforts to reform campaign finance are stymied by attempts to evade and circumvent regulations.