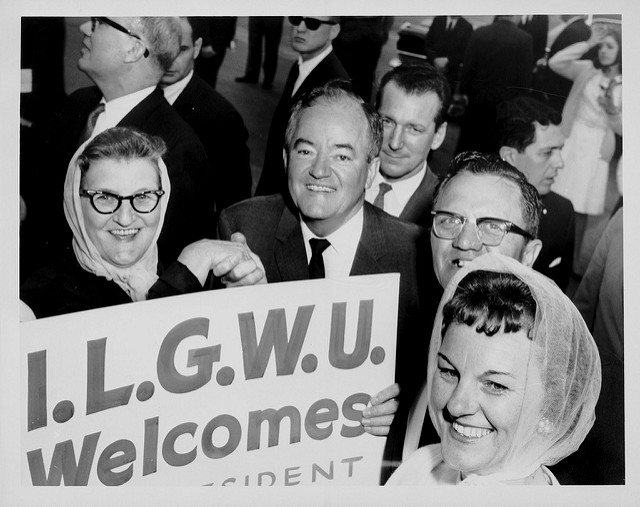 Humbert Humphrey with members of the International Ladies Garment Workers Union. Humphrey as a U.S. senator from Minnesota sponsored the Communist Control Act of 1954, outlawing the Communist Party. Although viewed as the moment when Democrats acquiesed to red scare politics, the new law was devised to provide ways for labor unions to avoid being declared illegal under the Internal Security Act. Humphrey later became vice president to Lyndon B. Johnson. (Photo via flickr from the The Kheel Center for Labor-Management Documentation and Archives at Cornell University, CC BY 2.0)

Congress passed the Communist Control Act of 1954 (CCA) as an amendment to the McCarran Internal Security Act of 1950 “to outlaw the Communist Party, to prohibit members of Communist organizations from serving in certain representative capacities, and for other purposes.”

The CCA was the brainchild of U.S. Sen. Hubert Humphrey, D-Minn., who reportedly had tired of being labeled “soft toward communism” (Ybarra 2004: 743).

Following an investigation by the Subversive Activities Control Board (SACB) into the methods and goals of communist leadership in American labor organizations, Congress through the CCA designated a class of “Communist-infiltrated organizations.”

Labor organizations determined to be communist-infiltrated by the SACB could reorganize and retain contractual rights gained through bargaining if 20 percent of the rank-and-file membership petitioned the National Labor Relations Board. In this regard, the CCA served as a means to protect rank-and-file union members from “Communist dictators who [were] using the unions and union funds to serve the ends of the Communist powers” (Tompkins 1955: 1397).

Although historically viewed as the moment liberal Democrats acquiesced to Red Scare politics, the CCA circumvented a proposed amendment to the Internal Security Act of 1950 that sought to declare unions “communist dominated” and strip them of all legal rights. Instead of declaring labor unions illegal, which would have deprived American laborers of their contractual protections, the CCA declared the Communist Party illegal.

The means by which the CCA sought to provide protection to American laborers impinged upon a number of constitutional rights.

In outlawing the Communist Party, the CCA denied the party the right to have bank accounts, enter into leases, obtain judicial enforcement of contracts, sue or be sued in courts, appeal adverse court rulings, conduct business activity, or appear on any ballot (Haerle 1955). Congress repealed most provisions of the act, which has rarely been enforced.

This article was originally published in 2009 while Kane M. Click was at University of Nebraska-Lincoln.