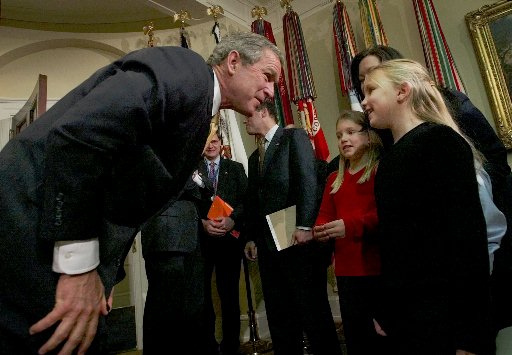 The Dot Kids Implementation and Efficiency Act of 2002  attempted to protect minors from inappropriate material on the Internet by creating a “safe haven” website. In this photo, President Bush leans in to talk to children after signing the bill. (AP Photo/Pablo Martinez Monsivais, used with permission from the Associated Press)

The Dot Kids Implementation and Efficiency Act of 2002 (Public Law 107-371) attempts to protect minors from inappropriate material on the Internet by creating a “safe haven” website, or what Rep. Fred Upton, R-Mich., has referred to as “a children’s library section of the Internet” (Browne 2004: 90).

The federal law responds to Supreme Court decisions invalidating portions of the Communications Decency Act of 1996 and the Child Online Protection Act of 1998 on grounds of vagueness and overbreadth.

In some respects, the law resembles an online zoning requirement. It entrusts the responsibility of creating the safe haven to the National Telecommunications and Information Administration (NTIA), which is part of the Commerce Department.

The NTIA must select an operator for the domain to draft standards ensuring that all materials on the site are in accord with the law, “suitable for minors, and not harmful to minors.”

The operator also must create “rules and procedures for enforcement and oversight that minimize the possibility that the new domain provides access to content that is not in accordance with the standards and requirements of the registry.”

Scholars debate whether the law has problems of vagueness and overbreadth similar to some of its predecessors; some also question whether the government is the proper guardian of such a site.

The contents of the site, which can be accessed at www.kids.us, remain relatively limited; much of the accessible material is provided by government entities such as the Smithsonian Institution and state governments.