By Karen Petersen
Other articles in Laws and Proposed Laws, 1951-2007 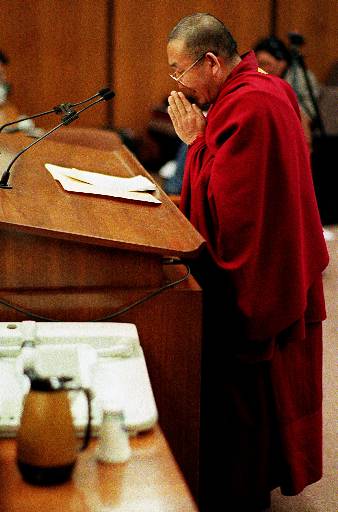 Agya Rinpoche, former Senior Abbot of Kumbum Monastery and former Vice President of the Buddhist Association of China, joins his hands in prayer to finish his testimony at a hearing of the U.S. Commission on International Religious Freedom in Los Angeles, 2000. Agya Rinpoche, the respected leader of Tibetan Buddhism spoke out against religious persecution by the Chinese government, saying it required monasteries to teach communism and renounce Tibet's spiritual leader, the Dalai Lama. The Commission on International Religious Freedom is an independent organization created by the International Religious Freedom Act of 1998. The act also established an office to oversee diplomatic missions to promote the First Amendment right of religion around the world. (AP Photo/Damian Dovarganes, used with permission from the Associated Press.)

The International Religious Freedom Act (IRFA) of 1998 offers an example of how the principles of the First Amendment can influence not only U.S. domestic policy, but foreign policy as well.

The act established the Office of International Religious Freedom within the Department of State to oversee numerous diplomatic missions to promote religious freedom. An ambassador-at-large heads the office and acts as the principal adviser to the president and secretary of state in matters concerning religious freedom abroad. The ambassador-at-large is also a nonvoting member of the Commission on International Religious Freedom, an independent organization created by the IRFA.

Based on these findings, the secretary of state can designate as “countries of particular concern” those nations guilty of particularly severe violations of religious freedom. The law authorizes the president to respond to such countries in a manner ranging from a private, but official, expression of concern to economic sanctions.

Other key elements of the IRFA are the establishment of guidelines delineating religious persecution and identifying specific actions constituting violations of religious freedom. The IRFA draws heavily on international law, referring to Article 18 of the Universal Declaration of Human Rights, the International Covenant on Civil and Political Rights, and the Charter of the United Nations. Regardless, some critics view the IRFA as a unilateral attempt to dictate policy to other countries (Shattuck 2002).

The first sentence of the first substantive section of the IRFA reads, “The right to freedom of religion undergirds the very origin and existence of the United States,” and the act proceeds to laud the “religious freedom” that the nation’s founders sought to establish. Discussions of the fundamental nature of the right to religious freedom permeate the IRFA and the subsequent reports mandated of the State Department and the commission created by the IRFA.

According to Farr (2006), the First Amendment and the test set out by the Supreme Court in Lemon v. Kurtzman (1971) to interpret the establishment clause restrain the effectiveness of the IRFA. Farr cites an unwillingness on the part of U.S. diplomats to engage international religious communities because of a fear that such actions will appear to advance or inhibit religion.

This cautious approach creates a dilemma for policymakers because the IRFA specifically charges that the effect of any policies implemented under the IRFA be evaluated in regard to the potential impact on religious communities. Therefore, although section 2(b) of the IRFA states that “[i]t shall be the policy of the United States...[t]o seek to channel United States security and development assistance to governments other than those found to be engaged in gross violations of the right to freedom of religion, as set forth in the Foreign Assistance Act of 1961, in the International Financial Institutions Act of 1977, and in other formulations of United States human rights policy,” potential actions may be inhibited by concerns related to the First Amendment.

Critics, including the former director of the Office of International Religious Freedom, charge that after the initial fanfare with which the IRFA emerged, it has brought few tangible improvements. They cite the relegation of the ambassador-at-large to the Human Rights Bureau, which is largely outside mainstream diplomatic circles, as indicative of the role of the IRFA in foreign policy and diplomacy (Farr 2006).

This article was originally published in 2009. Karen Petersen is dean of the College of Liberal Arts and professor of Political Science at Middle Tennessee State University.  Her publications include journal articles on the causes of interstate conflict, terrorism, the federal courts and FISA, and pedagogical issues related to online learning along with a co-authored book, Prospects for Political Stability in a Democratic Iraq, with Stephen Saunders.