By Dennis Miles
Other articles in Laws and Proposed Laws, 1951-2007 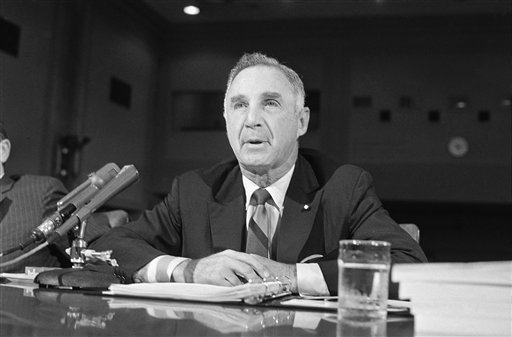 Congress passed the Public Health Cigarette Smoking Act of 1969 to regulate the advertising of tobacco products. Litigation over the constitutionality of its effect on speech reached the Supreme Court in 1972. In this photo, Joseph F. Cullman III, speaking for the Tobacco Institute, is a witness July 22, 1969 in Washington, before a Senate Commerce subcommittee. Cullman said the tobacco industry is agreeable to ending all radio and television advertising of cigarettes by September 1970. (AP Photo, used with permission from the Associated Press)

Congress passed the Public Health Cigarette Smoking Act of 1969 to regulate the advertising of tobacco products. Litigation over the constitutionality of its effect on speech reached the Supreme Court in 1972.

In the early 1960s, a committee established by U.S. surgeon general Luther L. Terry to study the health effects of cigarettes drew a link between smoking and disease. In response, Congress passed the Federal Cigarette Labeling and Advertising Act of 1965 (FCLAA), requiring that cigarette manufacturers include a warning about the dangers of smoking on all cigarette packages.

With the FCLAA set to expire, Congress passed the Public Health Cigarette Smoking Act, which President Richard M. Nixon signed into law in 1970. The statute amended the FCLAA by requiring a sterner warning on all cigarette packages and banning cigarette advertising on television and radio, beginning in January 1971. By early 1972, cigarette makers were to be required to include the same warning in their newspaper, magazine, and billboard advertisements.

The constitutionality of the Public Health Cigarette Smoking Act came into question in Capital Broadcasting Company v. Mitchell (1971). Six radio companies claimed that section 6 of the act—banning advertising on television and radio—violated the First Amendment right of freedom of speech. A federal district court disagreed, noting that “product advertising is less vigorously protected than other forms of speech.” On an appeal, the Supreme Court denied certiorari.

The Court had ruled previously that product advertising constituting purely commercial advertising is not protected by the First Amendment. In the mid-1970s, however, the Court in Virginia State Board of Pharmacy v.Virginia Citizens Consumer Council, Inc. (1976) began to establish more protection for commercial speech. It affirmed this position in later decisions. The Court has not ruled directly on the constitutionality of the Public Health Cigarette Smoking Act since 1972, when its decision in Capital Broadcasting Co. v. Kleindienst summarily affirmed the lower courts’ ruling in Mitchell.

This article was originally published in 2009. Dennis Miles is a reference and instruction librarian at Texas Wesleyan University.