By Ruth Ann Strickland
Other articles in Laws and Proposed Laws, 1951-2007, Freedom of the Press issues and topics 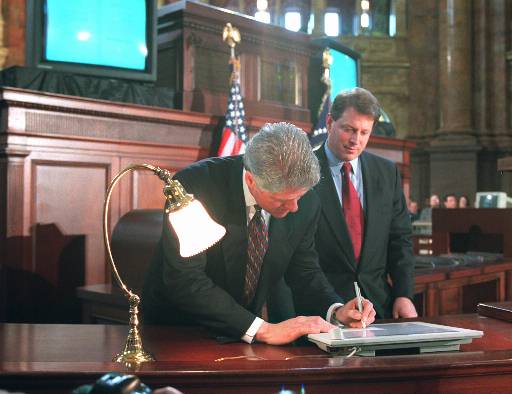 The Telecommunications Act of 1996, a rewrite of the Communications Act of 1934, significantly altered federal communications policy. In its provisions it deregulates cable television service; allows local telephone companies to provide cable television service; requires v-chips in new televisions, which allow parents to block access to objectionable and adult programming; increases the number of television stations that a single company may own; and bans the knowing transmission of indecent material to minors on the Internet. The latter provision, part of the Communication Decency Act (CDA), created criminal penalties for transmitting obscene, indecent, and patently offensive materials online.

Shortly after its passage, the CDA became the most controversial part of the new Telecommunications Act when free speech proponents expressed concerns about the breadth of its speech restrictions. In Reno v. American Civil Liberties Union (1997), the Supreme Court held that the Internet as a medium is entitled to as much First Amendment protection as the print medium and that the CDA was overbroad and impinged on protected speech. The Court ultimately invalidated the CDA provisions criminalizing “indecent” and “patently offensive” speech; the ACLU had not challenged the provision banning obscene online communications.

Partly because of this, the Playboy Entertainment Group challenged the regulation for being content-based and too restrictive on the broadcast of protected speech, and in United States v. Playboy Entertainment Group (2000) the U.S. Supreme Court struck down the provision, holding that Congress should seek a less restrictive method of shielding children from inappropriate material.

Another consequence of the Telecommunications Act was a flurry of media mergers. The act significantly reduced regulations on media concentration and cross-ownership of media outlets. This deregulation led to less competition and allowed such companies as AOL/Time-Warner and Viacom to purchase multiple media outlets in local markets.