By David L. Hudson Jr. (Updated December 2017)
Other articles in Laws and Proposed Laws, 2008 to present 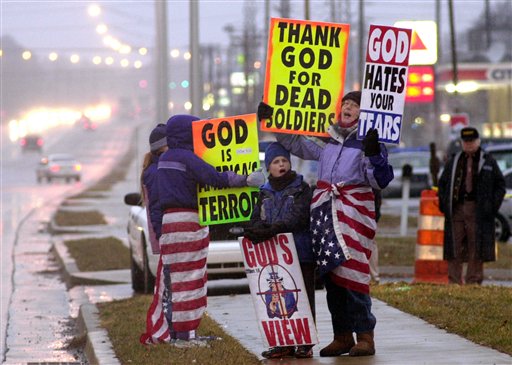 Members of Westboro Baptist Church protest before the start of a memorial service for Army soldiers killed in combat in 2006, in front of Fort Campbell, Ky. In response to distasteful protests, Congress and states have started to regulate funeral protests. Generally the regulations have survived First Amendment challenges. (AP Photo/Christopher Berkey, used with permission from the Associated Press)

Funeral protest laws have cropped up across the country in recent years in response to the picketing activities of the Westboro Baptist Church, founded by former attorney Fred Phelps. Members of the Kansas-based entity claimed U.S. soldiers were dying in the Iraq War because the United States does not condemn homosexuality. The group pickets the funerals of slain soldiers, bearing repugnant messages such as “God Hates Fags,” “No Fags in Heaven,” and “Fags Are Worthy of Death.”

Legislators across the country responded to the protests, which have been conducted in more than 40 states, by passing laws that seek to prohibit such protests during the hour before and after a funeral procession. Many of the laws also impose a distance requirement — often 300 feet — on such protests. Supporters of the legislation contend the measures are an appropriate way to protect the privacy rights of the deceased’s family. Opponents counter that the legislation was passed to suppress the free expression rights of an unpopular group.

The first funeral protest law was passed in 1992. Phelps successfully challenged part of the Kansas Funeral Picketing Act of 1992 in Phelps v. Hamilton (10th Cir. 1997), provoking the Kansas legislature to clarify the time periods in which such protests were prohibited.

More than 40 states have passed funeral protest laws. Numerous challenges have been filed to these laws on First Amendment grounds. The Westboro Baptist church had some initial success challenging certain funeral protest laws in Kentucky and Missouri. However, in more recent decisions, particularly at the federal appeals court level, the ordinances survive review.

In 2010, the 6th U.S. Circuit Court of Appeals upheld Ohio’s funeral-protest law in Phelps-Roper v. Strickland (2010). The 6th Circuit compared the funeral protest law to the law prohibiting picketing outside private residences upheld by the U.S. Supreme Court in Frisby v. Schultz (1989). “The Funeral Protest Provision only restricts picketing or other protest activities that are directed at a funeral or burial service,” the 6th Circuit wrote.

In 2017, the 8th U.S. Circuit Court of Appeals upheld Nebraska’s funeral protest law against a First Amendment challenge by the Westboro Baptist Church. The appeals court in Phelps-Roper v. Ricketts (8th Cir. 2017) reasoned that the law was content neutral, left open alternative means of communication, and was narrowly drawn.

The Westboro Baptist Church petitioned for Supreme Court review but the Court denied review in November 2017.

In a related matter, the United States Supreme Court protected the right of the Westboro Baptist Church to engage in lawful protest outside a church in Maryland in Snyder v. Phelps (2011). In 2007, a federal jury imposed nearly $11 million in damages against the Phelpses in a suit brought by the father of a man killed in the Iraq war whose funeral was protested by Westboro Baptist Church. Albert Snyder sued the Phelpses for intentional infliction of emotional distress, invasion of privacy, and civil conspiracy. In February 2008, the district court reduced the amount to $5 million.

The Fourth U.S. Circuit Court of Appeals reversed on appeal. The U.S. Supreme Court agreed with the Fourth Circuit’s rejection of the jury verdict. Chief Justice John G. Roberts, Jr. reasoned that the protestors’ speech touched on matters of public concern or importance. He also emphasized that the protestors conducted themselves peacefully on public streets pursuant to police directives and followed the laws.