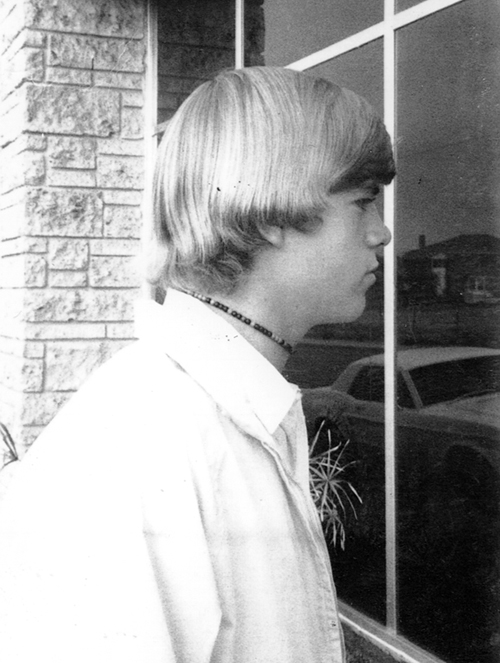 Chesley Karr in 1970, the year in which he challenged the haircut rules at his El Paso, Texas high school. The school rules did not allow a boy's hair to hang over the ears or the top of the collar of a standard dress shirt or obstruct vision. The Fifth U.S. Circuit Court of Appeals ruled in Karr's case that students had no constitutionally protected right to wear their hair in public high schools as they preferred. The Supreme Court declined to hear the case. The lower courts remain divided on whether grade school students receive constitutional protection for their hair length and style as symbolic speech. (Image via El Paso Times and El Paso Herald-Post)

Generally employers may set standards for their employees’ personal appearance, including their hair length and style, if the regulations are related to legitimate business or governmental objectives. Employers, school officials, and prison administrators have given a number of reasons for regulations determining hair length and hair styles; among them are identification, safety, hygiene, and appropriateness. Nevertheless, such regulations have led to First Amendment battles, with litigants in several cases challenging these policies for being discriminatory or for violating individuals’ rights to freedom of expression or the free exercise of religion.

In Kelley v. Johnson (1976), the Supreme Court addressed the constitutionality of grooming codes in a police department. The Court held that hair grooming requirements were legitimate ways of helping to make police officers more easily identifiable to the general public and of helping to maintain esprit de corps within the police force. No absolute First Amendment protections apply to one’s choice of personal appearance, including hair length and style.

The lower courts are divided on whether elementary or secondary school students receive constitutional protection for their hair length and style as symbolic speech. The Seventh U.S. Circuit Court of Appeals was receptive to the claim of male high school students contesting regulations regarding hair length in Arnold v. Carpenter (7th Cir. 1972), while the Fifth U.S. Circuit Court of Appeals rejected a similar claim in Karr v. Schmidt (5th Cir. 1972). Some courts have determined that the regulation of hair styles is a First Amendment free expression issue. In 1999, after a suburban school in Richmond, Virginia, sent an eighth-grade girl home because of her pink hair and long dress, her parents threatened a federal lawsuit. When the American Civil Liberties Union intervened, the school backed down and did not enforce its grooming regulations.

The U.S. Supreme Court never accepted a case on this issue, prompting Justice William O. Douglas to dissent from such denials, most notably in Olff v. East Side Union High School District (1972).  In that case, he sought to link a student’s choice of hair length and style to the decision recognizing the right of student to wear black armbands in Tinker v. Des Moines Independent Community School District (1969) and to the rights of both students and parents to make decisions with respect to their personal lives. Douglas also objected when the Supreme Court refused to review a case in which two Native American students were suspended for wearing their hair in long braids. In that case, New Rider v. Board of Education, Pawnee County, Oklahoma (1973), the 10th U.S. Circuit Court of Appeals had upheld a junior high school rule against hair longer than the ears or reaching a shirt collar based on testimony that it was a "rational way" to instill pride and initiative among students.

Hair regulation must not infringe on religious rights

Other challenges in federal courts argued that hair regulations infringe upon the First Amendment right to free exercise of religion. Courts have ruled that correctional officers may be subject to hair grooming policies if the state justifies its regulations with compelling interests such as safety, discipline, and esprit de corps and if the regulations do not substantially infringe upon an employee’s religious beliefs. Prisoners have also challenged hair grooming policies as impediments to the free exercise of religion. Prison officials, however, have claimed that hair grooming policies are necessary for hygiene, for identification of prisoners, and for prison security, in that some hairstyles might conceal weapons and contraband.

Generally the courts have held that if a grooming regulation is related to a legitimate interest, such as prison security, and does not deprive inmates of all ways of expressing their religious beliefs, the regulation is valid. However, prison officials are held to a higher standard when the inmate challenges a prison’s grooming policy under the Religious Freedom Restoration Act of 1993 or the Religious Land Use and Institutionalized Persons Act of 2000, as did Muslim inmate Gregory Hobbs who wanted to grow a ½-inch beard for religious reasons (Holt v. Hobbs, 2015). The Ninth Circuit Court of Appeals, in Warsoldier v. Woodford (9th Cir. 2005), issued a preliminary injunction shielding a Native American, whose religious beliefs prohibited him from cutting his hair except for the death of a close relative, against a prison regulation prohibiting hair of more than 3 inches in length.

Some jurisdictions have enacted laws prohibiting appearance discrimination. Washington, D.C., prohibits discrimination on the basis of an individual’s outward bodily appearance, which could include hairstyle. Santa Cruz, California, passed a similar statute forbidding discrimination based on physical characteristics. In Madison, Wisconsin, a statute gives protected class status to physical appearance, including hairstyle, except when it may conflict with a reasonable business objective. Laws such as these indicate changing public attitudes toward state regulation of personal appearance.

This article first published in 2009 and has been updated. The primary contributor was Ruth Ann Strickland, a retired professor at Appalachian State University. It has been updated by the First Amendment Encyclopedia.