By Ronald Kahn
Other articles in Issues Related to Speech, Press, Assembly, or Petition, Freedom of the Press issues and topics 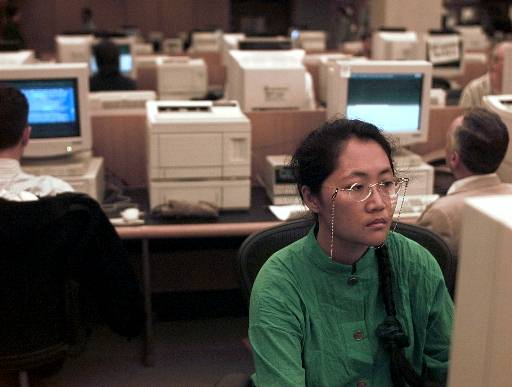 Yi Li uses a computer terminal at the New York Public Library to access the Internet, Wednesday, June 12, 1996. The graduate student from Taiwan supports the federal court decision issued in Philadelphia on Wednesday that bans government censorship of the Internet. Yi Li fears that government control of the Internet could be used by authoritarians to control or confine people. "We can use the (free flow of) information to unite the world," she said. (AP Photo/Mark Lennihan, reprinted with permission from The Associated Press)

The Supreme Court faces special challenges in dealing with the regulation of speech on the internet. The internet’s unique qualities, such as its ability to spread potentially dangerous information quickly and widely, as well as its easy accessibility by minors, have prompted lawmakers to call for tighter restrictions on internet speech.

Others argue that Congress and the courts should refrain from limiting the possibilities of the internet unnecessarily and prematurely because it is a technologically evolving medium. For its part, the Supreme Court continues to balance First Amendment precedents with the technological features of the medium.

Congress has attempted to protect minors from pornography on the internet

One major area of internet regulation is protecting minors from pornography and other indecent or obscene speech. For example, Congress passed the Communications Decency Act (CDA) in 1996 prohibiting “the knowing transmission of obscene or indecent messages” over the internet to minors. However, in 1997 the Supreme Court in Reno v. American Civil Liberties Union struck down this law as being too vague. The court held that the regulation created a chilling effect on speech and prohibited more speech than necessary to achieve the objective of protecting children.

In response to the court’s ruling, Congress in 1998 passed the Child Online Protection Act (COPA), which dealt only with minors’ access to commercial pornography and provided clear methods to be used by site owners to prevent access by minors. However, in 2004 the court struck down COPA in Ashcroft v. American Civil Liberties Union, stating that less restrictive methods such as filtering and blocking should be used instead. The court suggested that these alternative methods were at least in theory more effective than those specified in COPA because of the large volume of foreign pornography that Congress cannot regulate.

The Supreme Court has allowed the federal government to require libraries to install filters on their public computers to protect children from obscene material as a condition for receiving federal aid to purchase computers. But the three dissenting justices in United States v. American Library Association (2003) viewed the requirement of filtering devices on library computers, which both adults and children must request to be unlocked, to be an overly broad restriction on adult access to protected speech.

Congress also ventured into the area of child pornography, passing the Child Pornography Prevention Act (CPPA) in 1996. The CPPA criminalized virtual child pornography—that is, pornography that sexually depicts, or conveys the impression of depicting, minors. Although the act targeted computer-generated or altered works advertised as child pornography, in Free Speech Coalition v. Reno (9th Cir. 1999) the federal appeals court found some language in the statute to be so overly broad and vague that much protected speech would be covered under the CPPA. The court noted that the state’s interest in protecting children from the physical and psychological abuse arising from their participation in the making of pornography—the basis for its ban in New York v. Ferber (1982)—was not present in virtual child pornography.

U.S. courts have also dealt with other areas of internet speech that traditionally have been less protected or unprotected under the First Amendment. Planned Parenthood of the Columbia/Willamette, Inc. v. American Coalition of Life Activists (9th Cir. 2002), decided by an en banc panel of the 9th U.S. Circuit Court of Appeals, centered on what constitutes dangerous speech and a true threat in the context of the internet.

The American Coalition of Life Activists (ACLA) posted the personal contact information of doctors who performed abortions, including details such as the names of their children. The names of doctors who had been murdered were crossed off and the names of those who had been wounded by anti-abortion activists were grayed. Although the site did not contain explicit threats, opponents argued that it was akin to a hit list, and the doctors on the list believed it to be a serious threat to their safety.

The appeals court held that the ACLA could be held liable for civil damages, and that the website did not contain political speech protected under the First Amendment. The court wrote: “It is the use of the ‘wanted’-type format in the context of the poster pattern—poster followed by murder—that constitutes the threat.” The posters were not “political hyperbole” because “[p]hysicians could well believe that ACLA would make good on the threat.” Thus it was a true threat, not protected as political speech.

In an earlier case in 1997, the 6th U.S. Circuit Court of Appeals reached a different decision on violent material posted on the web and sent in emails by a university student, appearing to plan an attack on a woman at his college. Abraham Alkhabaz claimed the emails were mere fantasy. In United States v. Alkhabaz, and circuit court agreed, concluding that the messages did not constitute a true threat because they were not “conveyed to effect some change or achieve some goal through intimidation.”

Rights of anonymous speech not absolute on internet

In “The United States of Anonymous: How the First Amendment Shaped Online," author Jeff Kosseff explores two cases, Dentrite International, Inc. v. Doe No. 3, 775 A.2d 756 (N.J. App. Div. 2001) and Cahill v. Doe, 879 A.2d 943 (Del. Super. Ct., June 14, 2005), in which courts recognized relatively strong First Amendment presumptions on behalf of purveyors of anonymous speech, especially for those that are statements of opinions rather than obvious falsehoods, while recognizing that government sometimes has the right to identify such speakers when they have used their platforms to harass, engage in slander or sexual predation, make true threats, or allow foreign governments to influence U.S. elections.

This article was originally published in 2009 and was updated in March 2022.