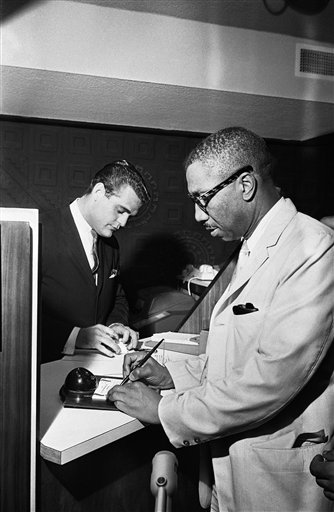 New York attorney and NAACP board member Robert Carter signs register at Sun 'N Sand hotel in downtown Jackson, Mississippi, July 6, 1964. Carter was the lead attorney for the NAACP in NAACP v. Alabama (1958), a case dealing with the forced disclosure of the membership of the NAACP. (AP Photo/Jim Bourdier, used with permission from the Associated Press)

The free speech and freedom of association clauses of the First Amendment generally prevent the government from requiring nonprofit, private, or political associations to disclose their members’ names. The reasoning is that forced disclosure of membership lists would inhibit people from joining some organizations.

Just after World War II, two events led many in Congress and elsewhere to inquire into the membership of various groups. The first event was the Cold War with the Soviet Union, which prompted the House Un-American Activities Committee (HUAC) and Sen. Joseph R. McCarthy, R-Wis., to hold hearings to determine whether some groups had been infiltrated or were dominated by Communists. Any group suspected of having Communist ties was placed on the attorney general’s list of subversive organizations by means of an executive order issued by President Harry S. Truman.

The second event provoking an interest in the membership of organizations was the emergence in the 1950s of the Civil Rights movement in the South. The southern states, in an effort to weaken or intimidate groups working for civil rights for African Americans, such as the National Association for the Advancement of Colored People (NAACP), sought disclosure of membership lists as a way to scare people away from joining the groups.

For example, in 1956 Alabama used its law requiring foreign corporations to register with the state to try to force the NAACP, a nonprofit corporation that was incorporated outside of the state, to turn over certain documents, including its list of members in the state.

The NAACP objected and sought to prevent enforcement of the law and provision of the documents. After an Alabama circuit court ordered the NAACP to produce the membership list, it twice sought to appeal the decision to the state supreme court, but was unsuccessful. However,the U.S. Supreme Court granted certiorari, and in NAACP v. Alabama (1958) ruled that the request for the membership list was unconstitutional.

Writing for a unanimous Court, Justice John Marshall Harlan II reasoned that the request for the membership list posed a potential restraint upon the freedom of association extended by the First Amendment to members of the NAACP. According to the Court, prior revelations of the “identity of its rank-and-file members has exposed these members to economic reprisal, loss of employment, threat of physical coercion,and other manifestations of public hostility. Under these circumstances, we think it apparent that compelled disclosure of petitioner’s Alabama membership is likely to affect adversely the ability of petitioner and its members to pursue their collective effort to foster beliefs which they admittedly have the right to advocate.”

Thus the Court ruled that, at least in the current circumstances, the First Amendment protected the membership lists of a nonprofit organization from government disclosure.

A few years later, however, the Supreme Court reached a contrary conclusion in Communist Party of the United States v. Subversive Activities Control Board (1961). In this case, Justice Felix Frankfurter, in his opinion for a 5-4 Court, upheld a provision of the Subversive Activities Control Act of 1950 that required Communist organizations to register with the government and provide it with their membership lists.

Frankfurter rejected claims that this requirement violated the First Amendment. He argued that First Amendment rights had to be balanced against Congress’s judgment about how best to address national security needs, and in this case the Court would defer to Congress in upholding the registration and disclosure requirements.

Although the Supreme Court has not officially overturned Communist Party of the United States, lower courts have questioned its validity. For example, in Familias Unidas v. Briscoe (5th Cir. 1980) the Fifth Circuit Court of Appeals invalidated a state law requiring the registration and disclosure of members of any organization deemed to be interfering with the operation of public schools. Familias Unidas, a group advocating for Hispanics in Texas, was facing disclosure of its membership.

The court, citing NAACP v. Alabama, ruled that the First Amendment protected the identity of the group’s members. In its decision, the court also distinguished the facts of the case from Communist Party of the United States, claiming that in that case the government had met its burden in drafting a narrowly tailored law to require provision of the membership list.

Court has made protection exceptions for political organizations

Even though the membership lists of nonprofit organizations and many other groups are generally protected,the Court has made some exceptions for political organizations. In Buckley v. Valeo (1976), the Supreme Court upheld the provisions of the Federal Election Campaign Act calling for the disclosure of contributors to political campaigns. It did so by arguing that concerns about deterring corruption justified the disclosure and that the law again met the burden of being narrowly tailored. However, the Court did not rule on whether party members as opposed to donors had to be disclosed, and in view of the NAACP v. Alabama decision, it is questionable that the Court would uphold a law with such a requirement today.

Overall, then, subject to some narrow exceptions, the membership lists of most organizations are protected under the First Amendment.