By Anne Reynolds
Other articles in Issues Related to Speech, Press, Assembly, or Petition 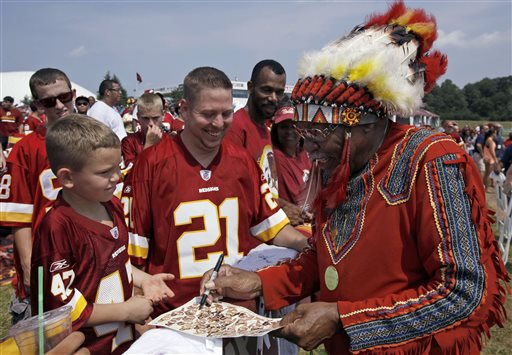 The concept of political correctness is based on the belief that speech or behavior that is offensive to various groups’ sensibilities should be eliminated, by means of regulations or penalties if necessary. An example of a political correctness debate involves the name of the Washington Redskins NFL team. The name has inspired protest, hearings and lawsuits. (Here, Zena "Chief Zee" Williams, unofficial mascot of the Washington Redskins, signing autographs during fan appreciation day. AP Photo/Alex Brandon, used with permission from the Associated Press)

The concept of political correctness is based on the belief that speech or behavior that is offensive to various groups’ sensibilities should be eliminated, by means of regulations or penalties if necessary. Since the First Amendment states that “Congress shall make no law . . . abridging the freedom of speech,” enforcement of political correctness in America normally comes not from legislation but from rules and regulations, such as campus speech codes, which seek in part to protect students from harassing comments. Some fear that such rules are based on the sort of cultural consensus that Alexis de Tocqueville and John Stuart Mill referred to as the “tyranny of the majority.” The origins of political correctness are debatable. Some trace it to liberals in the 1960s critical of the government and government propaganda. Others point to the early 1990s, when the term was used pejoratively by conservatives to attack liberal legislation.

There have been laws with political correctness intents

There are, however, instances of legislation with politically correct intent. Oklahoma Senate Bill 567, the so-called Oklahoma Racial Mascots Act, introduced in 2005, would have prohibited “the use of racially derogatory or discriminatory Native American school or athletic team names.” The Racial Mascots Act was opposed by Oklahoma state representative Mike Reynolds, who stated on the Oklahoma House of Representatives website that, “Words once meant as terms of honor now seem to be derogatory terms. . . .I think we’re letting political correctness run amok when we start legislating names for football teams.” The bill did not clear the Senate. Proponents of such measures, however, contend that allowing names offensive to certain cultures exploits and demeans the less powerful and perpetuates stereotypes.

If laws are made that penalize offensive speech, at least three points of possible contention are immediately apparent:

Questions arise as to whether language should be prohibited on the basis of one person being offended, a certain percentage of people taking offense, or simply decided by those in political power.

This is the crux of the problem. Political correctness seeks to put boundaries on offensive speech and behavior; but there is the risk that such boundaries are likely to be determined by the personal beliefs and values of those in power. This means that the definition of what is offensive can change with each group that comes into power. The goals of political correctness are often noble, often serving to protect marginalized, less powerful groups. Critics, however, contend that to legislate political correctness offends the First Amendment.

Anne Foust Reynolds, Cataloging Librarian at the Jerry Falwell Library for Liberty University, is also author of Racial Quotas for the Encyclopedia of the United States Constitution. This article was originally published in 2009.