By Judith Haydel
Other articles in Issues Related to Speech, Press, Assembly, or Petition, Media, General Legal Concepts and Theories 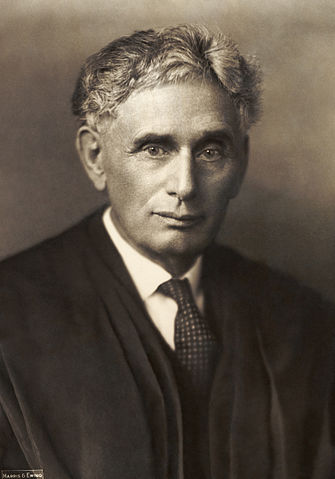 Privacy generally refers to an individual’s right to seclusion, or right to be free from public interference. Often privacy claims clash with First Amendment rights. For example, individuals may assert a privacy right to be “let alone” when the press reports on their private life or follows them around in an intrusive manner on public and private property. There is no explicit mention of privacy in the U.S. Constitution, but in his dissent in Gilbert v. Minnesota (1920), Justice Louis D. Brandeis, pictured here, nonetheless stated that the First Amendment protected the privacy of the home. In Griswold v. Connecticut (1965), Justice William O. Douglas placed a right to privacy in a “penumbra” cast by the First, Third, Fourth, Fifth, and Ninth Amendments. (Image via Library of Congress, circa 1916, public domain)

Privacy generally refers to an individual’s right to seclusion, or right to be free from public interference. Often privacy claims clash with First Amendment rights. For example, individuals may assert a privacy right to be “let alone” when the press reports on their private life or follows them around in an intrusive manner on public and private property.

Much like liberty, justice, and democracy, privacy appears to be an easy concept to understand in the abstract. Defining it in a legal context, however, is difficult and complicated by the fact that there are constitutional rights to privacy and also common law or statutory rights of privacy.

There is no explicit mention of privacy in the U.S. Constitution, but in his dissent in Gilbert v. Minnesota (1920), Justice Louis D. Brandeis nonetheless stated that the First Amendment protected the privacy of the home. In Griswold v. Connecticut (1965), Justice William O. Douglas placed a right to privacy in a “penumbra” cast by the First, Third, Fourth, Fifth, and Ninth Amendments.

Initially, the common law upon which the U.S. Constitution, state constitutions, and state laws are based, protected only property rights. During the 1880s, however, legal scholars began to theorize that the common law of torts, which involves injuries to private persons or property, also protected against government invasion of privacy.

In the late 1880s, Judge Thomas Cooley wrote in A Treatise on the Law of Torts or the Wrongs Which Arise Independent of Contract that people had a right to be let alone. Boston lawyers and former Harvard Law School classmates Samuel D.Warren and Louis D. Brandeis elaborated on this concept in their seminal 1890 article in the Harvard Law Review, “The Right to Privacy.” They argued that the common law’s protection of property rights was moving toward the recognition of a right to be let alone. Their article inspired some state courts to begin interpreting the civil law of torts to protect a right of privacy.

Later, Dean William Prosser, a torts law expert, in an influential 1960 article in the California Law Review wrote that there are four distinct types of privacy torts:

Sometimes privacy tort claims conflict with First Amendment free speech or free press claims. For example, the press may publish sensitive details of a person’s private life and be charged with a public disclosure of private facts tort.

The Court has rendered a number of decisions involving First Amendment freedoms and privacy. In Packer Corporation v. Utah (1932), Justice Brandeis suggested that the Court should consider the conditions under which privacy interests are intruded upon. His suggestion foreshadowed the Court’s later development of the distinction between privacy interests in the home and in public.

The First Amendment protection of privacy is greatest when the invasion of privacy occurs in the home or in other places where an individual has a reasonable expectation of privacy. For example, despite the fact that obscenity is not protected by the First Amendment, in Stanley v. Georgia (1969) the Court struck down a Georgia law prohibiting the possession of obscene materials in the home. Justice Thurgood Marshall wrote: “If the First Amendment means anything, it means that a State has no business telling a man, sitting alone in his own house, what books he may read or what films he may watch. Our whole constitutional heritage rebels at the thought of giving government the power to control men’s minds.”

In public, on the other hand, there is little or no First Amendment protection of privacy. In Cohen v. California (1971), the Court held that the privacy concerns of individuals in a public place were outweighed by the First Amendment’s protection of speech, even when the speech included profanity in a political statement written on a man’s jacket.

Freedom of association is strongest First Amendment protection for privacy

In De Jonge v. Oregon (1937), the Court declared that the right of people peaceably to assemble does not extend to associations that incite violence or crime. The Court in NAACP v. Alabama (1958) ruled that freedom of assembly includes the right to freedom of association and acknowledged that individuals are free to associate for the collective advocacy of ideas. Compelled disclosure of the NAACP’s membership lists, which was at issue in the case, would in effect suppress the Association’s ability to do business and hinder the group’s members from expressing their views.

Although the press does not have additional First Amendment rights that the public does not also enjoy, privacy rights ordinarily take a back seat to the media’s right to gather and publish truthful information that is available in public documents. For example, in Cox Broadcasting Corp. v. Cohn (1975) the Court ruled that freedom of the press interests in publishing publicly available information about the commission of a crime outweighed privacy rights. And in Bartnicki v. Vopper (2001), the Court upheld the right of a radio station to broadcast a private telephone conversation involving public persons and concerning political matters that was illegally intercepted by an anonymous third party.

Advances in technology, including the ubiquity of the Internet, are far outpacing government’s ability to address privacy issues in these new and ever-changing contexts. To make matters even more complex, national security interests are now entangled in this web of technological sophistication.

National security concerns in the wake of the September 11, 2001, destruction of the World Trade Center led to passage of the USA Patriot Act. Parts of the act expand government power to conduct surveillance of Americans. Although it prohibits investigations of Americans’ activities that are protected by the First Amendment, some government actions have been challenged in the courts as violating First Amendment rights. Early cases involved the National Security Agency’s wiretapping practices and a gag order provision that prevented recipients of national security letters from revealing they had received such a letter. It will take future litigation to determine the proper balance between privacy and national security.