By Gregory C. Sisk
Other articles in Issues Related to Speech, Press, Assembly, or Petition 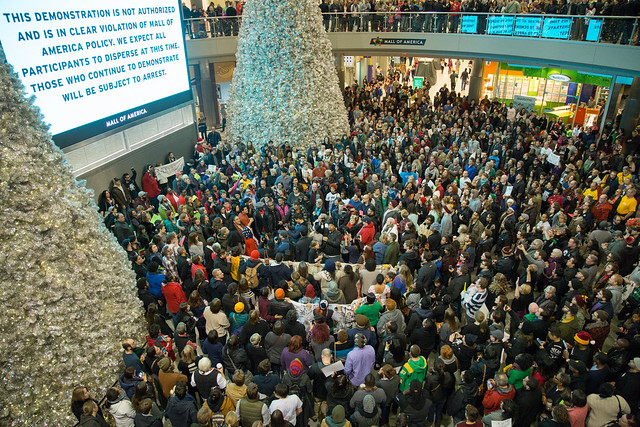 This photo shows a protest at the privately owned Mall of America in Bloomington, Minnesota, on Dec. 21, 2014. 25 of the protestors were arrested. The Supreme Court generally has rejected arguments that the First Amendment requires private property owners to accommodate speech by others. (Image via Nicholas Upton on Flickr, CC BY-SA 2.0)

The Supreme Court generally has rejected arguments that the First Amendment requires private property owners to accommodate speech by others. Under the “state action doctrine,” the Constitution is understood to draw a line between governmental entities, which are bound by constitutional limitations, and private citizens, who instead possess liberty interests and do not have public constitutional obligations.

Court said in Marsh that some private entities have constitutional obligations

In Marsh v. Alabama (1946), the Supreme Court considered the case of a "company town," which although privately organized nonetheless exhibited all the features of a city and indeed had assumed the civic responsibilities (including law enforcement) normall reserved to a municipality. By exercising public functions, this nominally private entity assumed the constitutional obligations of local government, specifically including the duty to permit exercise of expressive rights within the boundaries of the town.

The Court briefly expanded the Marsh public functions analysis to encompass other large property owners, even without exercise of governmental powers. In Amalgamated Food Employees Union Local 590 v. Logan Valley Plaza (1968), the Court declared a shopping center to be the “functional equivalent of a ‘business block’” open to the general public. It was held that the shopping center owner was subject to constitutional duties, specifically including the duty to allow speech that was directly related to the operations of the shopping center.

Justice Hugo L. Black dissented, in words and analysis that the Court later would adopt in overturning Logan Valley and in distinguishing the “company town” in Marsh from shopping centers and other large private facilities: “Under what circumstances can private property be treated as though it were public? ...I can find nothing in Marsh which indicates that if one of these features is present, e.g., a business district, this is sufficient for the Court to confiscate a part of an owner’s private property and give its use to people who want to picket on it.”

In Lloyd Corporation, Ltd. v. Tanner (1972), and Hudgens v. National Labor Relations Board (1976), the Court turned away from Logan Valley and returned to the traditional “state action” analysis under which constitutional rights apply only against public entities and those that assume governmental functions. Constitutional limitations on governmental conduct are inapplicable to private landowners and privately operated commercial enterprises.

In Lloyd Corporation, the Court rejected the argument that “property lose[s] its private character merely because the public is generally invited to use it for designated purposes.” In Hudgens, the Court confirmed that Logan Valley had been overruled. The Court applied the Lloyd Corporation analysis to labor picketing on the private premises of a shopping center, holding that no claim of constitutional rights justified entry onto the private property, because the actions of the owner of a private shopping center did not constitute state action.

In sum, the basic rule is that a constitutional right may be asserted by a citizen against his or her government, but not against another private person.

In PruneYard Shopping Center v. Robins (1980) the Supreme Court reaffirmed its precedent restricting application of federal constitutional rights to governmental entities and reiterating that private landowners do not assume public obligations simply because a facility is open to the public for particular purposes or the private facility is large in size. However, the Court acknowledged that a state could interpret its own state constitution more expansively to extend free expression guarantees beyond public property.

On the facts of the PruneYard case, the Court rejected the claims that the owner of the shopping center had suffered a constitutional taking in violation of the Fifth and Fourteenth Amendments or had suffered a deprivation of the owner’s free speech rights under First and Fourteenth Amendment by being required to facilitate the expressions of others under state law. Litigation in this area primarily revolves around whether various state courts interpret their state constitution to provide greater degrees of freedom than the First Amendment. Some states, such as New Jersey, have interpreted their state constitutional free expression principles broadly.