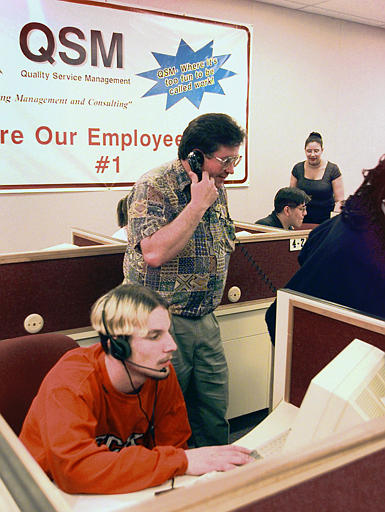 Telemarketing refers to the common practice of commercial and noncommercial organizations using the telephone to solicit business, raise funds, or sell products. Such telemarketing, because it involves speech, also implicates the First Amendment, which has not been viewed as an absolute bar to regulation. While it has mostly involved the sale of legal products or services, telemarketing is subject to governmental regulation, and many of these regulations have passed First Amendment review. In this photo, Denny Dillon, center, leads a shift of telemarketers at Quality Service Management Friday, May 12, 2000, in Lawrence, Kan. (AP Photo/Orlin Wagner, used with permission from the Associated Press)

Telemarketing refers to the common practice of commercial and noncommercial organizations using the telephone to solicit business, raise funds, or sell products. Such telemarketing, because it involves speech, also implicates the First Amendment, which has not been viewed as an absolute bar to regulation. While it has mostly involved the sale of legal products or services, telemarketing is subject to governmental regulation, and many of these regulations have passed First Amendment review.

Telemarketing is a means for businesses to contact thousands, if not millions, of customers. Telemarketers utilize lists of prescreened telephone numbers of individuals or organizations drawn from their own databases, or they purchase such lists from data collection services. They also may contact prospective customers via computer-assisted random-digit dialing to “cold call” individuals with whom they most likely have not done business previously and who are not as targeted a client pool as individuals on compiled lists.

Because telemarketing is a relatively easy way to reach individuals, throughout the 1990s and into the first decade of the twenty-first century more and more organizations began utilizing it to reach the public. As a result, the number of complaints brought against telemarketers for calling people at all hours, tying up the phone, or disturbing people after work skyrocketed. Some telemarketing has involved the sending of unsolicited faxes, and some early auto-dialers did not permit the person being called to disconnect from the call even after hanging up. In addition, some telemarketing has made use of fraudulent promotions or solicitations.

Beginning in the early 1990s, Congress and a number of states passed a series of laws to regulate telemarketing. In 1991 Congress passed the Telephone Consumer Protection Act, which required telemarketers to identify themselves as such. The act also gave the Federal Communications Commission (FCC) authority to limit the use of auto-dialers to contact certain numbers, businesses, or residential addresses, and it banned the delivery of unwanted faxes.

The 1994 Telemarketing and Consumer Fraud and Abuse Prevention Act, 15 U.S.C. 6101, et seq., gave the Federal Trade Commission (FTC) power to monitor deceptive telemarketing practices and enforce penalties against those who made use of them. To that end, in 1995 the FTC adopted the Telemarketing Sales Rule, which placed additional restrictions on telemarketers in terms of disclosure and protection of consumer privacy. This law requires telemarketers to make their calls between 8 a.m. and 9 p.m., and they also must identify themselves and state their purpose for calling.

In 2003 the FTC amended this rule to create the National Do Not Call Registry, which allows consumers to register their names with the FTC to indicate that they do not want telemarketers contacting them. However, this act does not apply to solicitations from nonprofits or political candidates or organizations or to solicitations to individuals with established business relationships with the telemarketer. In 2005 the Junk Fax Prevention Act amended the 1991 Telephone Consumer Protection Act to apply this law to unsolicited faxes.

Telemarketers have challenged many of these regulations as violations of their First Amendment right to free speech. However, because telemarketing is a form of commercial speech, the courts have granted it less protection than to other forms of speech and have generally upheld the restrictions. For example, in 2003 in Federal Trade Commission v. Mainstream Marketing Services, Inc. (10th Cir. 2003 and 10th Cir. 2004), a federal appeals court upheld the National Do Not Call Registry against a First Amendment challenge. The court ruled that the government’s interest in regulating fraud and abuse outweighed any rights to free speech on the part of the telemarketers.