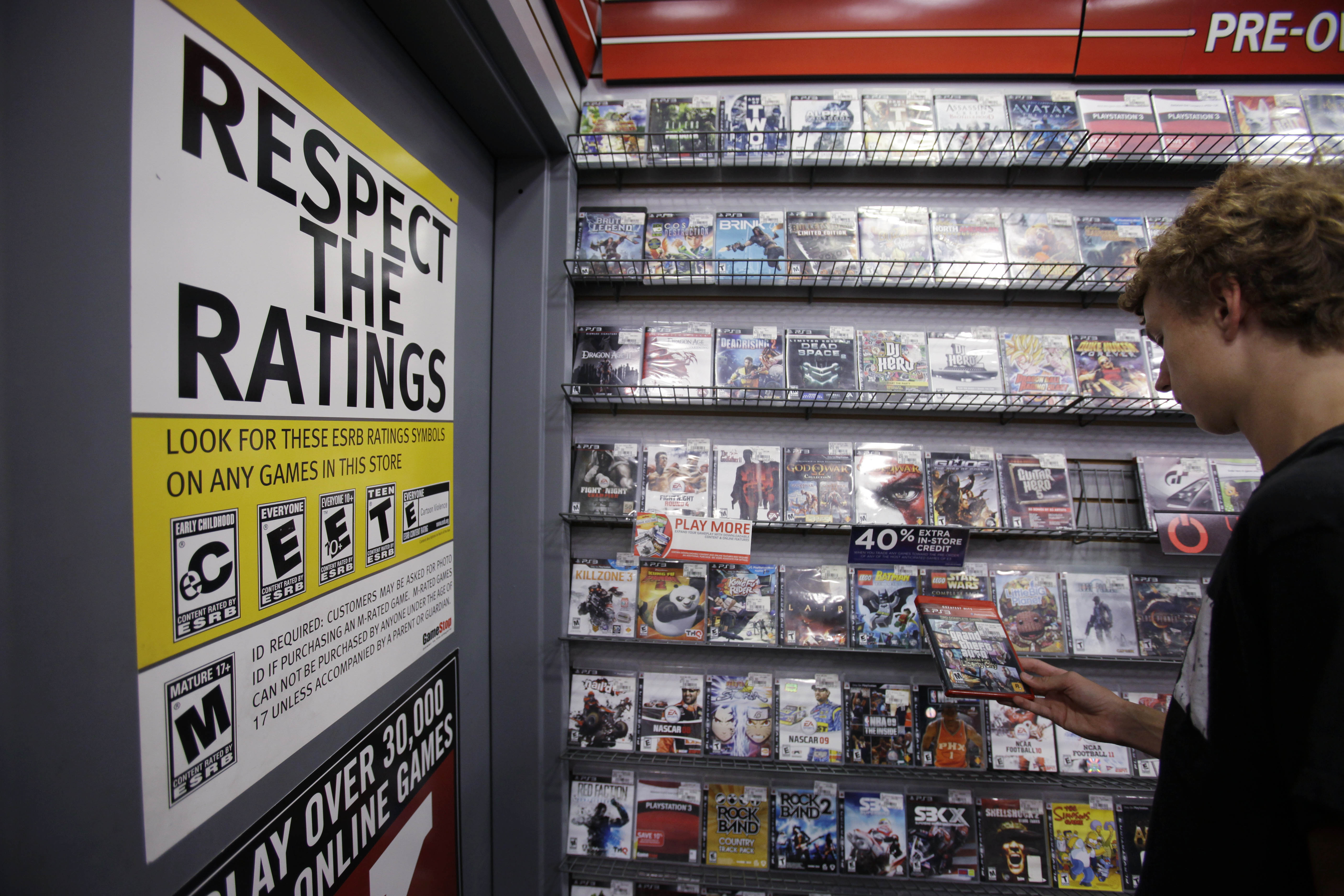 Jack Schooner, 16, looks at Grand Theft Auto video game at GameStop in Palo Alto, Calif., Monday, June 27, 2011, the day the Supreme Court ruled that it is unconstitutional to bar children from buying or renting violent video games. In the case, Brown v. Entertainment Merchants Ass’n (2011), the court said government doesn't have the authority to "restrict the ideas to which children may be exposed" despite complaints that the popular and fast-changing technology allows the young to simulate acts of brutality. The case recognized that video games get free-speech protection. (AP Photo/Paul Sakuma, used with permission from The Associated Press.)

The U.S. Supreme Court has explained that video games are a form of expression entitled to First Amendment protection.  In Brown v. Entertainment Merchants Ass’n (2011), the Court explained: “Like the protected books, plays, and movies that preceded them, video games communicate ideas -- and even social messages -- through many familiar literary devices … and through features distinctive to the medium. That suffices to confer First Amendment protection."

The Court in Brown invalidated a California law that prohibited the sale or rental of violent video games to minors without a parent present. The decision rejected the concept of violence as obscenity, reasoning that the concept of obscenity is relegated to areas of sexual expression.  The Court’s decision also showed a gradual move in American courts to recognize that video games were a medium of expression deserving of free-speech protection.

By contrast, in their early years video games were almost uniformly denied constitutional protection. In America’s Best Family Showplace v. City of New York (E.D. N.Y. 1982), a federal district court likened video games to mechanical entertainment devices, such as pinball machines, and recreational pastimes, such as chess and baseball, consisting of rules and implements. Not only did video games not inform, but they completely lacked the communicative or informative element required of speech protected by the First Amendment. In the 1980s, after the America’s Best decision, other courts followed suit and held that because video games were not designed to communicate or express information, they were not entitled to receive constitutional protection. But as video games began experiencing new regulatory pressure, the courts eventually reversed direction.

During the late 1990s, video games came under increasing legal assault, both from state regulators and from civil liability lawsuits. Laws restricting children’s access to violent and sexually explicit video games were enacted after allegations that such games were a factor in the various high school shootings that had gripped the nation’s attention.

The most notorious occurred in 1999, when 13 people were killed at Columbine High School in Littleton, Colorado, by two teenage shooters, who then committed suicide. In the aftermath of these shootings, victims, commentators, and psychologists alike blamed the graphic violence in the various video games the shooters frequently played. Indeed, the Columbine shooters were described as fanatical consumers of violent video games, spurring the families of the victims to file wrongful death lawsuits against the makers of those video games.

The lawsuits, together with the state laws passed regulating video games, relied on various research studies depicting a causal relationship between violent video games and violent, aggressive, anti-social behavior on the part of the players. Some studies even concluded that video games, compared with other forms of entertainment, were disproportionately focused on violence. In fact, there was evidence that the interactive nature of violent video games had a greater detrimental effect on the behavior of those who played them than did the passive nature of television or motion pictures, two other media often blamed for encouraging anti-social behavior.

Circuit court declined to give violence a constitutional protection exception

In response to this legal assault on violent video games, the courts changed their approach from that taken in the America’s Best type of cases. This change was spearheaded by the Seventh U.S. Circuit Court of Appeals in American Amusement Machine Association v. Kendrick (7th Cir.2001), a constitutional challenge to an Indianapolis ordinance that sought to limit the access of minors to violent video games.

In overturning the ordinance and holding that video games qualified for full First Amendment protection, the Seventh Circuit, in an opinion by Judge Richard A. Posner, declined to carve out a constitutional exception for violence, such as that for obscenity. According to the court, obscenity was unprotected not because it affected anyone’s conduct (as was alleged for violent video games), but because it violated community norms about the permissible scope of depictions of sexual activity. Thus offensiveness, not harmfulness, was why obscenity lacked any constitutional protection.

In further support of its opinion, the Kendrick court noted that violence is a historic element of cultural expression. Violence, the court said, has always been a central interest of humankind and a recurrent theme of culture. Therefore, violent video games are just doing what countless authors have done before. The court also indicated that such games may be a key component of individual development. It asserted that exposure to violent images is not something that minors should be shielded from until they turn 18, because it would be deforming to leave a minor unequipped to cope with the harsh reality of a culture in which violence has become a permanent fixture.

Until Kendrick, no court had explicitly held that video games qualified as protected speech within the meaning of the First Amendment. After the Kendrick decision, the tide turned.

In Interactive Digital Software Association v. St. Louis County (8th Cir. 2003), the Eighth U.S. Circuit Court of Appeals overturned an ordinance that restricted children’s access to graphically violent video games and held that video games are as much entitled to the protection of free speech as the best of literature. Contrary to the lower court’s ruling that games needed to “express or inform” before they were entitled to First Amendment protection, the Eighth Circuit held that the First Amendment protects entertainment as much as it protects political speech, and that a particularized message is not required for speech to be constitutionally protected.

Noting that the First Amendment was versatile enough to protect the paintings of Jackson Pollock and the verse of Lewis Carroll, the court saw no reason why video games should not be entitled to the same protection. It found that the violent video games at issue contained story lines, just like books and movies. The court also found the interactivity of video games similar to that of literature; literature is most successful, said the court, when it draws the reader into the story, makes him identify with the characters, and invites him to judge them and quarrel with them.

This article was originally published in 2009 and updated in 2017. Patrick Garry, JD, PhD, is a professor of law at the University of South Dakota School of Law. Professor Garry’s books on the First Amendment include Scrambling For Protection: The New Media and the First Amendment, An American Paradox: Censorship in a Nation of Free Speech, and Limited Government and the Bill of Rights.