By Paul Pope (Updated December 2017 by Deborah Fisher)
Other articles in Issues Related to Speech, Press, Assembly, or Petition 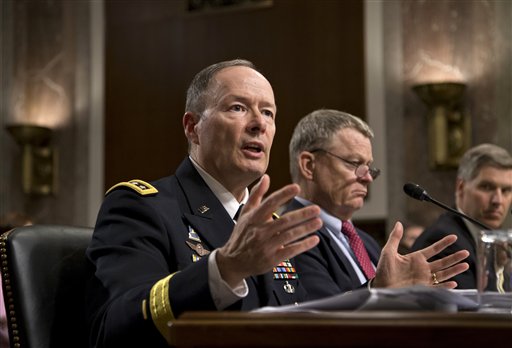 Gen. Keith B. Alexander, director of the National Security Agency and head of the U.S. Cyber Command, answers questions from lawmakers on Capitol Hill in 2013 during a Senate Appropriations Committee hearing. It was his first public appearance before Congress since revelations that the electronic surveillance agency is sweeping up Americans' phone and Internet records in its quest to investigate terrorist threats. (AP Photo/J. Scott Applewhite, used with permission from the Associated Press)

The framers of the U.S. Constitution understood how eavesdropping might intrude on privacy and chill free speech. However, the framers could not have foreseen the technological advances that now aid eavesdropping.

Interception of private communications via electronic surveillance has become a critical tool of law enforcement and has been used for decades to assist in gathering evidence.

Thousands of convictions have centered on evidence gathered from electronic eavesdropping, whether by physically tapping into land telecommunication lines or by intercepting wireless electronic signals. This use of wiretaps set free speech on a collision course with the government. In a post–September 11, 2001, world, wiretapping has moved to the forefront of American legal concerns with the expanded use of electronic surveillance by government agencies conducting the War on Terror.

In Olmstead v. United States (1928), the Supreme Court held that the wiretaps attached by law enforcement to the phone lines of prohibition conspirators, including Roy Olmstead, were constitutional because there had been no physical trespass.

Chief Justice William Howard Taft asserted that a person who connects a phone to lines that extend outside of a home with the intent to project his or her voice outside has no expectation of privacy with regard to the ensuing conversations. However, he argued for judicial restraint when he suggested that Congress could make wiretaps inadmissible by passing legislation prohibiting or regulating their use.

In 1967, Court shifted to protect individual liberties in face of wiretapping

In Katz v. United States (1967), the Court held that the wiretapping of public phone booths for listening to conversations without a warrant, regardless of no physical trespass taking place, was unconstitutional, essentially reversing Olmstead.

Justice Potter Stewart concluded in Katz that “wherever a man may be, he is entitled to know that he will be free.”

These two cases illustrate a shift in the Court’s thinking. In Olmstead the Court showed deference to the state and its efforts to gather evidence of a crime, whereas Katz illustrates a clear move towards greater protection of individual liberties.

It was not until December 2005 that the existence of the program was exposed by the New York Times. An article in the newspaper stated that the program was targeting U.S. citizens and was being conducted without a judicially authorized warrant.

First Amendment concerns emerge when the NSA eavesdropping program utilizes data-mining operations in the organization’s search for terrorists. The random collection of information from land-line calls, cell phones, and e-mail creates uneasiness about the limits of government surveillance of citizens.

The Supreme Court has previously held that listening to conversations of U.S. citizens without a warrant is unconstitutional and violates core principles of the Bill of Rights, and the Fourth Amendment regulates the ability of the government to infringe upon a citizen’s First Amendment right to free speech as well as the privacy of that speech.

The court held that the TSP violated “the Separation of Powers doctrine; the First and Fourth Amendments of the United States Constitution and the statutory law.”

The ACLU argued that the wiretapping violated its and its clients' right to free speech in their communication with people outside of the United States.

The injunction was intended to end the warrantless wiretapping by the NSA, which justified the action as essential in fighting the War on Terror. The district court held that the Foreign Intelligence Surveillance Act (FISA) of 1978 is still law, and that the NSA should have sought warrants from the secret FISA court. The FISA court was intended to place a wall between intelligence information gathering and criminal investigations.

However, the Sixth Circuit Court of Appeals vacated Judge Diggs’s ruling in July 2007, finding that the ACLU and the other plaintiffs lacked standing to challenge the federal policies.

In Clapper v. Amnesty International (2013), petitioners argued about the possible “chilling effect” that wiretaps conducted under FISA might have on their First Amendment Rights.

They argued that there was “an objectively reasonable likelihood” that the government would acquire their communications, and that this risk had led them to pursue costly alternatives like foreign travel rather than phone calls.

The federal district court had dismissed the case for lack of standing, but the Second U.S. Circuit Court of Appeals had reversed this ruling. Justice Samuel Alito wrote the decision for five members of the Court, rejecting their arguments to establish standing.

However, in a ruling that has been noted as pushing back on certain mass surveillance activities, the Supreme Court in Carpenter v. United States (2018) ruled that an individual maintains a legitimate expectation of privacy in the record of his physical movements as captured through cell-site location information.