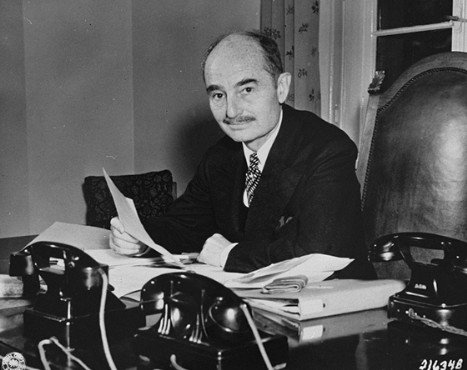 Francis Beverley Biddle (1886–1968), a federal appeals court judge, solicitor general, and U.S. attorney general, has been generally praised for his temperate balancing of freedom and security during World War II.

Born in 1886 in Paris while his parents were living abroad, Biddle grew up in a privileged Philadelphia family. After obtaining his undergraduate and law degrees from Harvard University, Biddle clerked for U.S. Supreme Court Justice Oliver Wendell Holmes Jr. He then entered private practice at his father’s law firm of Biddle, Paul and Jayne. He later moved to another private law firm. In 1922 Biddle began a three-year stint as an assistant U.S. attorney in Pennsylvania.

Biddle then served in a series of government jobs: chair of the National Labor Relations Board (NLRB), judge on the 3rd U.S. Circuit Court of Appeals, U.S. solicitor general, and U.S. attorney general. He practiced law privately in between his stints as head of the NLRB and his appointment to the federal judiciary in 1939. While in private practice, he coauthored with Osmond K. Fraenkel amicus briefs for the American Civil Liberties Union in the U.S. Supreme Court First Amendment cases of Senn v. Tile Layers Protective Union (1937) and Lovell v. City of Griffin (1938).

It is his service in the position of attorney general for which Biddle is best remembered. Peter G. Renstrom (2001) writes that “far fewer people were prosecuted for sedition by Biddle’s Justice Department than had been the case during World War I” (p.54).

Biddle told the New York Times in 1941: “In so far as I can, by use of the authority and the influence of my office, I intend to see that civil liberties in this country are protected; that we do not again fall into the disgraceful hysteria of witch hunts, strike breaking and minority persecutions which were such a dark chapter in our record of the last World War” (Blanchard 2002: 365).

Biddle resigned as attorney general after President Franklin D. Roosevelt’s death in 1945, but he was later appointed by President Harry S. Truman to serve as a judge at the Nuremberg trials.

Biddle argued against guilt by association

Biddle wrote numerous books that dealt with civil liberties issues, including The Fear of Freedom (1951) and In Brief Authority (1962). He argued against the practice of guilt by association during the McCarthy era and the activities of the House Un-American Activities Committee.