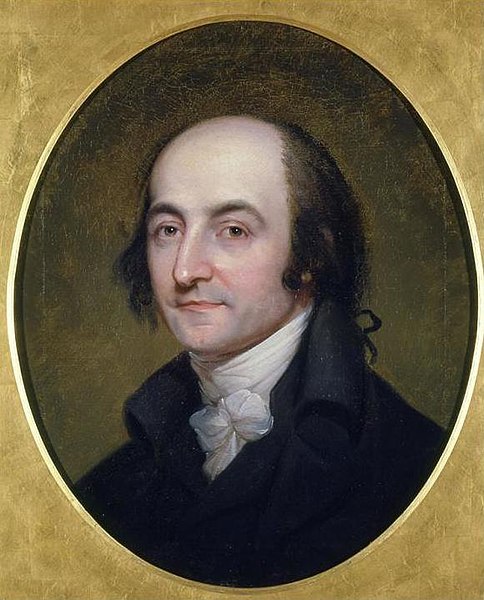 Albert Gallatin was an early American politician who was an advocate of individual liberties and freedoms throughout his career, including First Amendment religious freedom and press freedom. (Painting by Rembrandt Peale, 1805, via Wikimedia Commons, public domain)

Albert Gallatin, best known as President Thomas Jefferson’s secretary of the Treasury, opposed the U.S. Constitution because he feared the loss of individual freedoms under it. He remained concerned about civil liberties, including those in the First Amendment, once the Constitution was adopted.

Born into a prominent family in Geneva, Switzerland, Gallatin lost his parents and his only sibling during childhood. He graduated from Geneva Academy in 1779 and emigrated to the United States in 1780, partly because he liked the new nation’s liberal political values.

Gallatin first became active in U.S. politics in August 1788, when Pennsylvanians opposed to the proposed federal constitution met to argue against ratification. Conceding the need of a central government for protection from without and from within, Gallatin criticized the elements of the proposed document because he thought that it did not sufficiently protect individual liberty from concentrated power

He specifically wanted to limit the authority of the executive and judicial branches because they would be further from the people and, therefore, more susceptible to corruption and abuses. He wanted the House of Representatives to be large enough to repel special interests and to protect itself against the Senate.

Gallatin served in the Pennsylvania state legislature from 1790 to 1792. He advocated a system of public education, but also displayed his lifelong interest in financial matters, supporting bills to abolish paper money, pay the public debt in specie, and establish a bank of Pennsylvania to help support business endeavors.

Pennsylvanians elected him to the U.S. Senate in 1793, but Gallatin was denied his seat, ostensibly because he had not been a U.S. citizen for nine years. Evidence suggests that his anti-Federalist activities were also to blame.

In 1794 the Whiskey Rebellion began in western Pennsylvania, and President George Washington moved quickly to put it down. Gallatin feared that the combination of a uniformed governmental presence along with the repression of public opinion could lead to dissolution of the Union. He also expressed concern that a vengeful military could turn on the citizenry. He argued that a free government should have authority that rests upon the consent of the people rather than force and oppression. Nevertheless, Gallatin urged the rebellious farmers to submit to government taxation.

Gallatin continued his political career by serving in the U.S. House of Representatives from 1795 to 1801.

In 1797 he became the leader of the Republican minority. He insisted that the Department of the Treasury be accountable to Congress and played an instrumental role in creating a standing committee on finance.

Gallatin was among the Republicans who opposed the adoption of the Alien and Sedition Acts of 1798, the latter of which abridged freedom of speech and press. His skill at party organization helped Jefferson win the presidency, and in 1801 Jefferson appointed Gallatin to head the Treasury.

Gallatin supported westward expansion and, pacific by nature, strongly encouraged the Louisiana Purchase as a means of avoiding war. He insisted that trial by jury, freedom of religion, and freedom of the press be established in the newly acquired territory.

Gallatin spent 12 years as Secretary of the Treasury, a record that has yet to be surpassed. He concerned himself chiefly with balancing the budget and reducing the national debt.

After Gallatin left the cabinet, President James Madison sent him to Russia, in 1813, to discuss the czar’s offer to mediate a settlement of the War of 1812. In 1814 he helped draft a peace treaty as a member of the U.S. Peace Commission at Ghent. Gallatin then served as U.S. envoy to France from 1816 to 1823 and to Great Britain from 1826 to 1827. He concluded his public service as president of the New York branch of the second Bank of the United States from 1831 to 1839.

In retirement, Gallatin continued to show his concern for individual liberties. He opposed the U.S. takeover of Oregon and American involvement in Mexico in the 1840s as acts of aggression that threatened freedom. By the time of his death, Gallatin’s contemporaries ranked him only slightly below Washington, Jefferson, and Madison in service to his country.