By Caryn E. Neumann
Other articles in Groups and Organizations 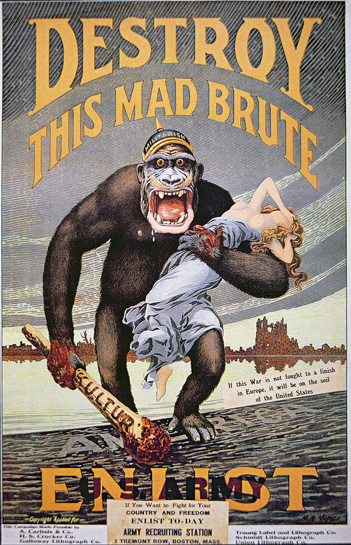 The Committee on Public Information produced war propaganda meant to build support for World War I and demonize the German military. One of the committee's more vivid posters depicts a German as a gorilla with a club (Image via Library of Congress, public domain)

The Committee on Public Information (CPI), also known as the Creel Committee after its chairman, George Creel, served as the first large-scale propaganda agency of the U.S. government.

CPI established to mobilize public opinion behind World War I

President Woodrow Wilson established the committee in April 1917 through Executive Order 2594 in response to the U.S. entry into World War I in an attempt to mobilize public opinion behind the war effort with every available form of mass communication.

One section of CPI coordinated work abroad, and another section oversaw work on the home front. The domestic section consisted of bureaus targeting a wide variety of groups, including laborers, women, industrialists, farmers, and immigrants. In delivering its message to such groups, the CPI sought to make every American a participant in the war effort.

Creel, a former journalist, particularly targeted newspapers. He later estimated that the news division placed material in 20,000 newspaper columns each week during the war. A separate newspaper division monitored the hundreds of foreign-language publications in the United States. Beginning in May 1917 and running through March 1919, the CPI published Official Bulletin, a newspaper distributed free to public officials, newspapers, post offices, and other agencies. It carried statements from the government and had a circulation of about 115,000.

In the effort to build an intellectual justification for U.S. involvement in the war, Creel appointed University of Minnesota history professor Guy Stanton Ford to head the division of civic and educational publications.

Ford’s section published more than 100 titles that defined American ideals, indicted German militarism, promoted the expansion of the president’s power in foreign relations, told Americans what they could do to speed victory, and endorsed censorship.

Visual images further helped to mobilize support for the war. The division of pictorial publicity joined with the division of advertising to create some of the war’s most vivid images in posters designed to demonize the German military. Some of the more infamous posters portrayed a German gorilla with a club labeled kultur and a green-eyed, blue-skinned German soldier with bloody fingers.

Not every American made the distinction between Germans overseas and German-born Americans in the United States. In addition, the government linked any opposition to the war effort, whether by pacifists or communists, to treason. It trampled First Amendment rights, largely because of the success of the CPI in instilling fear through war propaganda. The CPI often blurred Wilson’s political goals with the national interest.

Following the end of the war in 1918, the reputation of the CPI began to decline. Many Americans concluded that the committee had oversold the conflict and had created a climate that suppressed legitimate dissent. When President Franklin D. Roosevelt created the Office of War Information (OWI) to promote World War II, the agency viewed the CPI as an example of mistakes to be avoided. The OWI turned down Creel’s request to join the new propaganda war.