By Tobias T. Gibson (Updated May 2017 by John R. Vile)
Other articles in Groups and Organizations 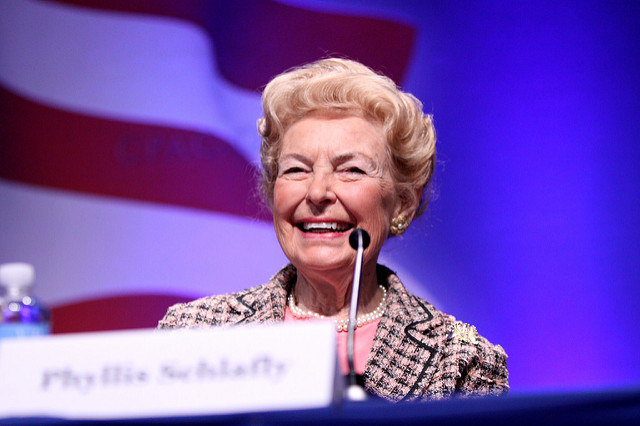 Phyllis Schlafly, shown here in 2011, founded the Eagle Forum in 1972. The Eagle Forum has taken various stances on First Amendment issues. It opposed the FCC's repeal of the fairness doctrine, and in recent years, sided with Hobby Lobby and other businesses who opposed health care regulations requiring them to provide forms of birth control that they considered to be abortifacients. (Photo by Gage Skidmore via Flickr, CC BY-SA 2.0)

The Eagle Forum is a conservative women’s group founded in 1972 by Phyllis Schlafly. The organization’s stance on First Amendment policy issues depends on how they correlate to the group’s perspective. The Eagle Forum promotes its agenda by lobbying Congress and state legislatures and through litigation.

In the 1980s, standing with groups across the political spectrum, including the NAACP and AFL-CIO, the Eagle Forum opposed the Federal Communications Commission’s repeal of the Fairness Doctrine, which had required broadcast networks to voice opposing stances on major controversies. The Eagle Forum also played a major role in passing legislation in Tennessee mandating that any teacher presenting the theory of evolution as a fact be fired.

The organization sometimes joins more liberal organizations in opposing government intrusion on personal affairs. Thus, in the wake of the Sept. 11, 2001, al-Qaeda attacks, the Eagle Forum joined the American Civil Liberties Union and Human Rights Watch, among others, in warning Congress against thinking that all legislation labeled anti-terrorist would necessarily increase national security.

In recent years, the Eagle Forum sided with Hobby Lobby and other businesses who opposed health-care regulations requiring them to provide forms of birth control that they considered to be abortifacients. The forum also opposed the establishment of so-called “safe spaces” and speech codes on college and university campuses, which they thought undermined the First Amendment, and favored the teaching of “intelligent design” in school classrooms. Schlafly was adamantly opposed to an Article V convention to amend the Constitution, fearing that, if held, it might be controlled by liberals.

Schlafly encountered some opposition from within her organization when she endorsed Donald Trump for president. She died in September 2016.  Eunie Smith, who had served as first vice-president of the group since 1996, succeeded her as president.

This article was originally published in 2009. Tobias T. Gibson is the John Langton Professor of Legal Studies and Political Science at Westminster College in Fulton, MO.