By Mitzi Ramos
Other articles in Groups and Organizations 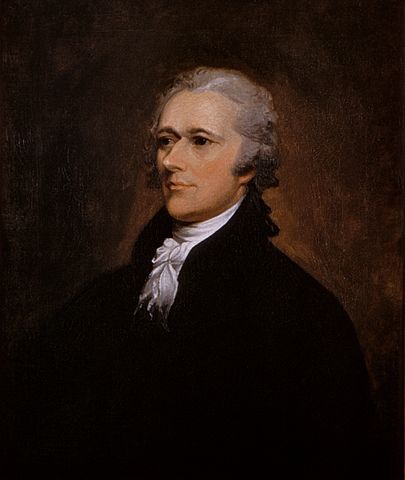 The name Federalists was adopted both by the supporters of ratification of the U.S. Constitution and by members of one of the nation’s first two political parties. Alexander Hamilton was an influential Federalist who wrote many of the essays in The Federalist, published in 1788. These articles advocated the ratification of the Constitution. Later, those who supported Hamilton’s aggressive fiscal policies formed the Federalist Party, which grew to support a strong national government, an expansive interpretation of congressional powers under the Constitution through the elastic clause, and a more mercantile economy. (Image via Wikimedia Commons, painted by John Trumbull circa 1805, public domain)

The name Federalists was adopted both by the supporters of ratification of the U.S. Constitution and by members of one of the nation’s first two political parties.

Federalists battled for adoption of the Constitution

Faced with forceful Anti-Federalist opposition to a strong national government, the Federalists published a series of 85 articles in New York City newspapers in which they advocated ratification of the Constitution. A compilation of these articles written by James Madison, Alexander Hamilton, and John Jay (under the pseudonym Publius), were published as The Federalist in 1788.

Through these papers and other writings, the Federalists successfully articulated their position in favor of adoption of the Constitution.

In light of charges that the Constitution created a strong national government, they were able to argue that the separation of powers among the three branches of government protected the rights of the people. Because the three branches were equal, none could assume control over the other.

The Federalists further argued that because it would be impossible to list all the rights afforded to Americans, it would be best to list none.

In the end, however, to ensure adoption of the Constitution, the Federalists promised to add amendments specifically protecting individual liberties (Federalists such as James Madison ultimately agreed to support a bill of rights largely to head off the possibility of a second convention that might undo the work of the first).

Federalists compromised and adopted the Bill of Rights

Thus upon ratification of the Constitution, Madison introduced 12 amendments during the First Congress in 1789. States ratified 10 of these amendments, now designated as the Bill of Rights, in 1791. The first of these amendments contains guarantees of freedom of religion, speech, press, peaceable assembly, and petition and has also been interpreted to protect the right of association.

Although the Bill of Rights enabled Federalists and Anti-Federalists to reach a compromise that led to the adoption of the Constitution, this harmony did not extend into the presidency of George Washington; political divisions within the cabinet of the newly created government emerged in 1792 over national fiscal policy, splitting those who previously supported the Constitution into rival groups, some of whom allied with former Anti-Federalists.

Those who supported Alexander Hamilton’s aggressive fiscal policies formed the Federalist Party, which later grew to support a strong national government, an expansive interpretation of congressional powers under the Constitution through the elastic clause, and a more mercantile economy.

Their Democratic-Republican opponents, led by Thomas Jefferson and James Madison, tended to emphasize states’ rights and agrarianism. In 1798, during the administration of John Adams, the Federalists attempted to squelch dissent by adopting the Sedition Act, which restricted freedom of speech and the press, but opposition to this law helped Democratic-Republicans gain victory in the elections of 1800.

Although the Federalist Party was strong in New England and the Northeast, it was left without a strong leader after the death of Alexander Hamilton and retirement of John Adams. Its increasingly aristocratic tendencies and its opposition to the War of 1812 helped to fuel its demise in 1816.

This article was originally published in 2009. Mitzi Ramos is an Instructor of Political Science at Northeastern Illinois University.