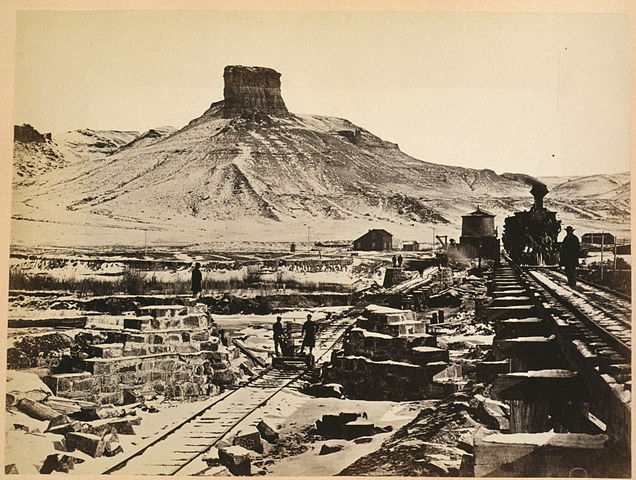 Citadel Rock and a railroad bridge being constructed across the Green River in Green River, Wyoming, 1868. Many Green River residents worked night shifts on railroads, and in 1931, the town became the first in the United States to adopt an ordinance banning door-to-door solicitations. Such ordinances are today called Green River ordinances. (Public domain.)

Local ordinances that prohibit individuals from engaging in door-to-door sales or solicitations unless the residents have given their consent are known as Green River ordinances.

They are named for Green River, Wyoming, which, in 1931, was the first town to adopt an ordinance banning door-to-door solicitation. Many other jurisdictions subsequently adopted similar ordinances. Although such laws may conflict with rights of free speech and the free exercise of religion, the Green River ordinance was not initially challenged on First Amendment grounds.

The townspeople in Green River, many of whom worked nightshifts on the railroads, favored the act as a way to reduce the number of door-to-door solicitations they were receiving, often at times when they were trying to sleep. The Tenth Circuit Court of Appeals, in Town of Green River v. Fuller Brush Co. (10th Cir. 1933), upheld the regulation as a legitimate application of state police powers that did not improperly affect interstate commerce.

Although the case was not appealed to the Supreme Court, the Court later upheld a similar law in Breard v. Alexandria (1951). Breard came at a time, however, when courts were offering limited protection to commercial speech under their interpretations of the First Amendment.

A host of other decisions, for example, Martin v. City of Struthers (1943), which invalidated the application of an ordinance to Jehovah’s Witnesses selling literature door to door, suggest that such ordinances are invalid if they are applied to religious, political, or other noncommercial solicitations.