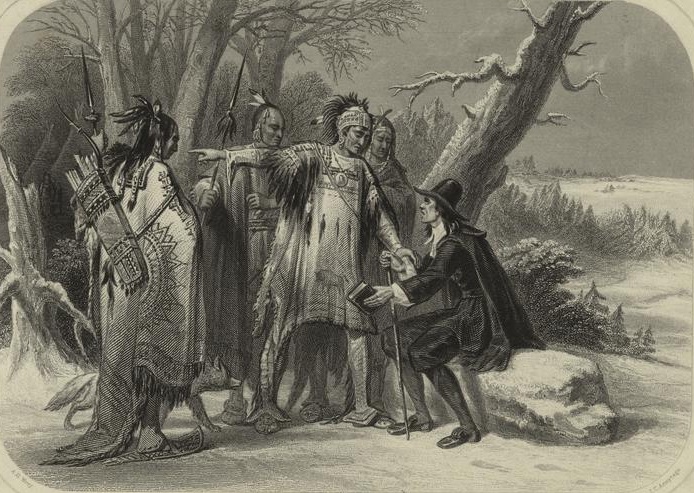 Roger Williams, founder of Rhode Island, advocated for separation of church and state to preserve the purity of the church. Williams's arguments for religious liberty no doubt influenced the writers of the First Amendment. (Image of the Naragansett Native Americans receiving Roger Williams via New York Public Library, public domain)

Roger Williams (1604?–1683) was born in London, England, and earned a degree from Pembroke College, Cambridge, in 1627. After studying theology, he worked briefly as a chaplain before embracing Puritanism.

As a separatist, Williams believed that the Church of England was beyond redemption, and he refused advancement within it. He emigrated to Boston in February 1631, and a few months later he became a teacher in the church at Salem.

Williams left Salem for Plymouth Colony after his religious views came to be at variance with those of the leaders of the Salem church of the time. He served as an assistant pastor in Plymouth while studying Native American languages. The Boston magistrates objected when the Salem church sought to recruit Williams as its minister once more; however, in 1633, in defiance of the Massachusetts general court, Salem accepted Williams, and the newly appointed minister continued to speak his mind.

To contemporaries as well as to later observers, Williams appeared as a man out of place. Instead of accepting the authority of the Puritan fathers of the Massachusetts Bay Colony, Williams clashed with them. He questioned matters that no one else debated, at least not publicly.

Williams objected to the interlocking of church and state in an era when such a union was regarded as integral to the functioning of government. He alienated the Puritan clergy in Boston when he asserted that the civil magistrates were not authorized to enforce the “First Table,” or the first four of the Ten Commandments which pertain to the private spiritual life.

Williams put on trial for speaking his mind, banished from Massachusetts Bay Colony

Williams believed that the magistrates had no jurisdiction over the consciences and souls of people, and he further denied the validity of oaths when oaths were the most solemn of undertakings at that time. He also condemned prayer offered in company with those who were not sufficiently devout, but perhaps most seriously, Williams declared that the Crown had no right to take the lands of Native Americans without adequately compensating the Indians for the territory.

For speaking his mind, Williams was tried before the Massachusetts General Court in July 1635. When he refused to recant, he received a sentence of banishment from the colony with the threat of sending him back to England to prevent him from spreading his beliefs throughout the New World. The civil authorities of Massachusetts Bay and the ministers of the Massachusetts churches hoped that banishment would provide a final answer to the questions that Williams had raised. Aided by a friend, William escaped to Manton’s Neck within Plymouth Colony, however, and in June 1636, at the insistence of Plymouth authorities, Williams moved out of that territory.

With a few followers, Williams founded the colony of Providence in present-day Rhode Island in 1636. Freed from the constraints of the Massachusetts Bay Colony, Williams put his ideas about the separation of church and state, land policy, and friendly relations with the Narragansett Indians into practice.

Providence enjoyed complete religious freedom, and it became a haven for many who were persecuted elsewhere for their faith. Yet Williams did not believe that all religions were equal and was known to rage against the Quakers. Still, he believed that forced worship offended God.

Unlike Thomas Jefferson who would follow, Williams did not wish to separate church and state primarily to preserve the peace and purity of the state but rather to preserve the peace and integrity of the church. He opposed linking political and economic privilege to church membership because such privileges corrupted the honesty of religious life. In essence, Williams adhered to a more Puritan form of Puritanism than the fathers of Massachusetts Bay.

Williams came to doubt Puritanism and became a Baptist in 1639, going on to establish the first Baptist church in America. Within a few years, however, Williams refused to follow any specific religion, although he still accepted the basic tenets of Christianity.

He returned to England in 1643 to settle a political dispute by obtaining a charter for Providence. By this time, troubles within Providence had shown Williams that it was difficult to govern explosive spirits, and he began to focus more on religious liberty than on pushing Massachusetts into separation from England.

While in England, he wrote The Bloudy Tenent of Persecution (1644), a plea for religious liberty. The book became part of a series of six letters and books published between 1643 and 1652 in which Williams exchanged views with John Cotton, a representative for the Massachusetts authorities. These writings were not limited to a rehashing of the original controversy, although the true nature of the church and the justice of Williams’s sentence were discussed. Both men hoped to shape the future course of politics and religion by alternatively arguing for religious liberty or political order.