By Peter McNamara
Other articles in Laws and Proposed Laws, 1791-1899 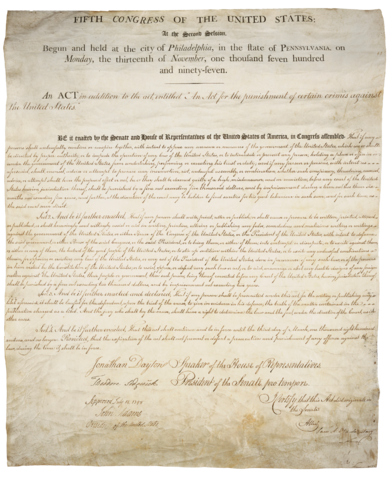 Passed by a Federalist-controlled Congress on July 14, the Sedition Act of 1798 (shown in this image) was part of a series of measures, commonly known as the Alien and Sedition Acts, ostensibly designed to deal with the threats involved in the “quasi-war” with France. The clash over the Sedition Act yielded the first sustained debate over the meaning of the First Amendment. (Image via Wikimedia Commons, public domain)

Passed by a Federalist-controlled Congress on July 14, the Sedition Act of 1798 was part of a series of measures, commonly known as the Alien and Sedition Acts, ostensibly designed to deal with the threats involved in the “quasi-war” with France. Critics viewed the act as a thinly disguised partisan effort to control political debate until the next presidential election. The clash over the Sedition Act yielded the first sustained debate over the meaning of the First Amendment.

Democratic-Republicans were targets of the Alien and Sedition Acts

The three so-called Alien Acts made it difficult to become a naturalized citizen and gave the president power to deport without trial aliens he considered threatening. The sweeping language of the Sedition Act made it illegal, among other actions, to “write, print, utter or publish...any false, scandalous and malicious writing...with intent to defame the...government” or “to stir up sedition within the United States.” The acts were set to expire on March 3, 1801.

Federalist judges enforced the law with vigor. There were twenty-five arrests, fifteen indictments, and ten convictions, many upon charges so flimsy as to be comical.  Targets of the act tended to be the editors of Democratic-Republican newspapers who criticized the Federalist administration of President John Adams.

Federalists genuinely worried that the French threat, both military and ideological, might be enough to topple the infant republic. To them, a seditious libel law was part of the English common law, constitutional under the necessary and proper clause, and an obvious instrument of defense. They believed the First Amendment embodied only the common law protection of forbidding prior restraint. Leading Federalists thought that it was impossible to attack members of the government without attacking the very foundation of government itself.

The Federalists argued that the Sedition Act in reality expanded civil liberties. The act allowed “the truth of the matter contained in publication” as evidence in defense and gave the jury “a right to determine the law and the fact.” This contrasted with English common law, which did not admit truth as a defense and limited the role of the jury to establishing the fact of publication.

Republicans argued that regulatory speech powers were not necessary, proper

Republicans countered that the Constitution expressly delegates no power to regulate speech or the press and that such powers are in no sense necessary and proper. The First Amendment, they argued, specifically prohibits the making of any law whatsoever regarding speech or the press.

In some instances, the Republicans’ arguments were directed more fully in support of the case for states’ rights, as in the case of Thomas Jefferson’s Kentucky Resolutions. James Madison, in his Virginia Resolutions and more fully in the report he authored for the Virginia Assembly in 1800, stressed the necessity of completely free and vigorous political debate for republican governments. The common law, he argued, had evolved to meet the needs of hereditary systems, not those of an elective system that necessarily requires the continuous critical examination of public officials and policies. Madison’s argument called into question not just the constitutionality of a national seditious libel law but the need for such a law at any level of government in an elective system.

The prosecutions and subsequent convictions under the Sedition Act galvanized opposition to the Federalist administration. The prosecuted Republican printers and editors became folk heroes. In the election of 1800, the Federalists were swept from power—never to return—and Jefferson subsequently pardoned those who had been convicted under the law.

Almost 170 years later, the Supreme Court wrote in the celebrated libel case New York Times Co. v. Sullivan (1964): “Although the Sedition Act was never tested in this Court, the attack upon its validity has carried the day in the court of history.” Today, the Sedition Act of 1798 is generally remembered as a violation of fundamental First Amendment principles.

This article was originally published in 2009. Peter McNamara is a Professor in the School of Civic and Economic Thought and Leadership at Arizona State University.