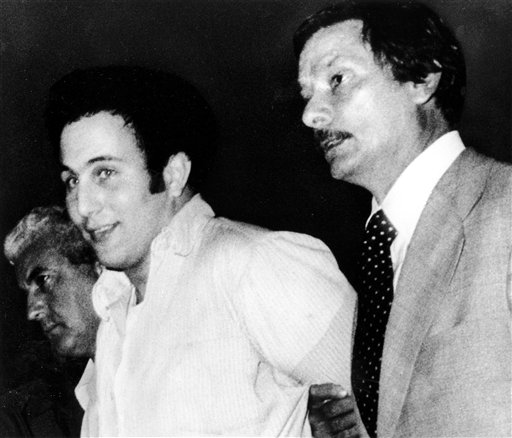 Son of Sam laws prohibit criminals from profiting from writings or shows about their crimes. The first such law was hastily enacted in 1977 after serial killer David Berkowitz (pictured here being taken to police headquarters in 1977), also known as the "Son of Sam," sold his exclusive story rights. In 1989, the publisher Simon and Schuster challenged the law and the Supreme Court ruled it violated the First Amendment. (AP Photo/Hal Goldenberg, used with permission from the Associated Press)

Son of Sam laws prohibit criminals from profiting from writings or shows about their crimes. However, courts have frequently struck down these laws on First Amendment grounds.

The purpose of the law was to “prevent those accused or convicted of a crime from profiting from the commercial exploitation of their crimes by contracting for the production of books, movies, magazine articles, television shows and the like in which their crime is reenacted” or in which the “person’s thoughts, feelings, opinions or emotions” about the crime are expressed.

The law required that any profits obtained from works describing a crime be withheld and made available to the victims. All monies received would be paid to the New York Crime Victims Board and held in escrow for five years. To claim the funds, the victim would have to obtain a civil money judgment against the criminal within this period.

On October 26, 1989, the publisher Simon and Schuster filed suit against the New York State Crime Victims Board in the U.S. District Court of New York.

At issue was the publisher’s contract with former Mafia member Henry Hill, whose past criminal activities were the basis of Nicholas Pileggi’s best-selling book Wiseguy and later the hit movie Goodfellas. The federal district court and later a federal appeals court upheld the New York Son of Sam law.

However, in 1991 in Simon and Schuster v. Members of the New York State Crime Victims Board the Supreme Court declared that the statute was an unconstitutional content-based restriction of speech for two reasons.

First, the statute was overinclusive because it applied to any work that expressed the author’s thoughts or recollections of the crime, whether or not the author had been accused or convicted. Because crime-related expression itself is not criminal, writing about a crime should be protected under the First Amendment.

Second, the statute was underinclusive because it imposed a financial burden on individuals related to the content of their speech — that is, it would redirect income from an expressive activity, whereas other income would not be included.

This article was originally published in 2009. Sandra Thomas is the Director of the library at Southeastern Oklahoma State University.