By Sara L. Zeigler (Updated September 2017 by David L. Hudson Jr.)
Other articles in Categories of Laws and Proposed Laws 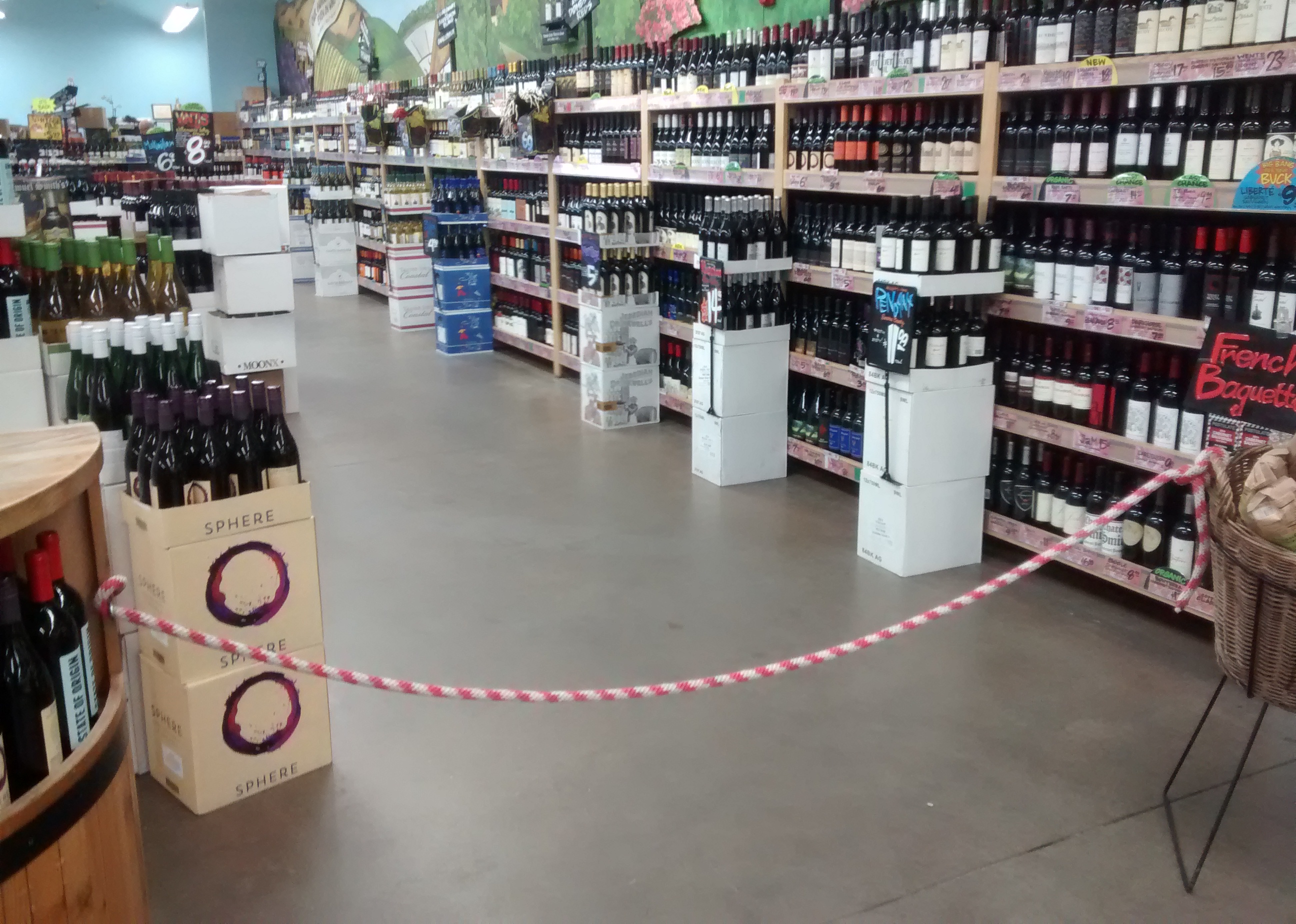 The Supreme Court has held that Sunday blue laws are permissible, and many states still have them, though they are not as restrictive as in early America. Most today have to do with the prohibition of alcohol sales on Sunday, such as demonstrated in this photo where the wine section is roped off at a Trader Joe's store in Chapel Hill, North Carolina to comply with that state's law. (Photo by Mx. Granger, public domain via Wikimedia Commons)

The term blue law commonly refers to the prohibition of alcohol sales on Sunday, but it historically defined a body of regulations designed to preserve the Sabbath by proscribing most labor on that day.

Some such restrictions date to as early as the thirteenth century in England.

Colonial settlements enacted similar laws, with the explicitly religious intent to prevent unseemly activities on the Sabbath. Early New England blue laws were extensive, including bans on everything from wearing lacy shirtsleeves to using birth control to hunting.

After independence, many former colonies retained these laws, and new states adopted them as they joined the union.

The origin of the term blue law is unclear. By some accounts, it referred to the blue wrapping that accompanied printed documents of the late eighteenth century. More colorful versions propose that the term was a mocking reference to the effort to prevent “blue,” or indecent, behavior, such as adultery, fornication, blasphemy, and drinking.

Most blue law provisions relating to everyday activities, such as housework and travel, had disappeared by the end of the colonial period, but restrictions designed to limit alcohol consumption and to preserve Sunday as a day of rest remained.

They were revitalized during the temperance movement of the nineteenth century. Many states retained the restrictions and the language, although seemingly archaic, describing the religious intent behind them well after the repeal of Prohibition.

As such, the laws raised constitutional concerns under the First Amendment. The establishment clause of the First Amendment specifically prohibits any law “respecting an establishment of religion.” By designating Sunday as a Sabbath and by restricting the activities of individuals on that day, states with Sunday blue laws were arguably favoring Christianity over religions that celebrate different Sabbaths.

Litigation over Sunday laws was common throughout the nineteenth century and the first half of the twentieth century.

The Supreme Court finally ruled on the matter in 1961, in McGowan v. Maryland, a case filed by employees of a large department store who were fined for selling merchandise (including floor wax and toys) on Sunday, in violation of state law.

They argued that the statute was intended to encourage church attendance and to induce those with dissenting religious beliefs to join predominant religious groups in their Sabbath.

The Court, while acknowledging the religious origins of the Sunday blue laws, held that they were constitutional. Much of the religious language had been removed from the statute — excluding a single remaining reference to the “Lord’s day” — and many of the restrictions had been lifted.

The Court’s opinion, authored by Chief Justice Earl Warren, held that the laws were permissible regulations under the state’s police powers to regulate in the interest of public health, safety, welfare, and morals and that the regulations sought to provide a day for leisure and family, not to impose a particular set of religious practices.

The effect of the Court’s decision in McGowan was to leave regulation of Sunday activities to the states, resulting in a patchwork of rules that vary by county or municipality.

Most remaining blue laws regulate alcohol sales, with 32 states imposing restrictions on Sunday sales. In Braunfeld v. Brown (1961), the Court ruled that states could apply blue laws to those, in this case orthodox Jews, who also closed their businesses on Saturdays for religious reasons.

In many states, the authority to enact a blue law is left to local city and county governments.

In the 21st century, states have begun to ease restrictions and in some cases repeal Sunday blue laws altogether.

Although secularization has played a role in that process, the primary motivation has been economic. With increased competition and people on the move around the clock, many businesses cannot afford to lose a full day’s revenues by remaining closed on Sunday.

Such pressures have created new constitutional problems under the free exercise clause, as businesses require employees to work Sunday schedules. Oftentimes the cases are brought under the general federal anti-discrimination statute, Title VII of the Civil Rights Act of 1964, which requires employers to make reasonable accommodations when an employee’s bona fide religious practices conflict with a neutrally applied job requirement. Employers do not have to provide such accommodations if it imposes an undue hardship on their business.

While the trend is to eliminate blues laws, some states still have such “Sunday” laws on the books.  For example, Connecticut law prohibits hunting on Sundays except for “hunting deer with bow and arrow on private property”  Conn. Gen. Stat. § 26-73 (2017).   North Carolina prohibits hunting on Sundays within 500 feet of a place of worship or in any county with a population of greater than 700,000. N.C. Gen. Stat. §103 – 2.