By Mark Byrnes
Other articles in Issues Related to Speech, Press, Assembly, or Petition 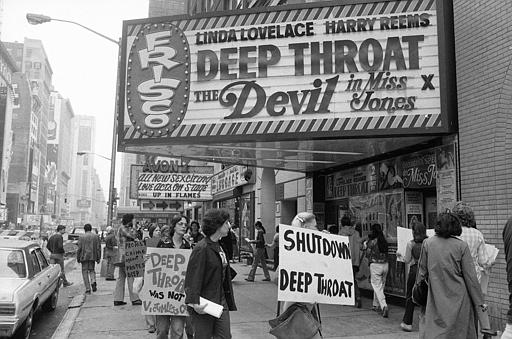 Numerous cases before the Supreme Court have affirmed that First Amendment protections cover movies as well as printed materials. However, movies can still be censored for obscenity. One striking example of this is the 1972 pornographic film “Deep Throat,” which was banned in 23 states. In this photo, protesters in New York City, picket a theater where the film was being shown in 1980. (AP Photo/Dave Pickoff, used with permission from the Associated Press)

Despite movie mogul Samuel Goldwyn’s well-known declaration that “messages are for Western Union,” Hollywood has produced many films that deal with issues of political and social significance.

Although producers make movies primarily to entertain audiences and make money, some films do contain political messages and may even influence the political opinions of the people who watch them. Hollywood films have addressed several topics related to the First Amendment, including freedom of religion, freedom of speech, and freedom of the press.

Hollywood frequently tackles religious topics. Some films deal explicitly with freedom of religion, and many others deal with religion more broadly. One of the preeminent films in the former category is Inherit the Wind (1960), which dramatizes (or more arguably overdramatizes) the 1925 Scopes monkey trial, concerning a Tennessee law banning the teaching of evolution in public schools. Sergeant York (1941) recounts how the World War I hero Alvin C. York reconciled his pacifist religious views with his nation’s call to arms.

Other films addressing freedom of religion include The Work and the Glory II: American Zion (2005), which tells the story of the Mormons’ search for religious freedom through migration to the American West; The Believer (2001), an account of a Jewish man who struggles with his faith; School Prayer: A Community at War (1999), a television documentary that follows a Mississippi parent’s efforts to have Bible study removed from her children’s school; and The Handmaid’s Tale (1990), which explores how every facet of people’s lives, including their sexual and reproductive activities, might be controlled under a theocracy. Although obviously not set in the United States, The Ten Commandments (1956) also relates a story of religious freedom.

A number of movies have dealt with Jesus Christ and his followers. Mel Gibson’s Passion of the Christ (2004) sparked considerable discussion because of its graphic depiction of Jesus’ last hours. Other films featuring Jesus include The Last Temptation of Christ (1988), which stirred controversy over its unconventional portrait of Jesus, Jesus Christ Superstar (1973), and The Greatest Story Ever Told (1965). “Christ figures,” characters reminiscent of Jesus, have been featured in a range of movies, including The Day the Earth Stood Still (1951), Cool Hand Luke (1967), The Shawshank Redemption (1994), and Superman Returns (2006). A variety of movies — among them Keeping the Faith (2000), Brighton Beach Memoirs (1986), Yentl (1983), and The Chosen (1981) — explore Jewish life and culture in the United States.

Another part of the First Amendment, freedom of speech, has been examined in several movies. The People v. Larry Flynt (1996) explains how the pornographer named Larry Flynt came to be a defender of free speech and press, including a depiction of his celebrated triumph before the Supreme Court in Hustler Magazine v. Falwell (1988).

The documentary Inside Deep Throat (2005) examines free speech, governmental censorship, and other issues surrounding the 1972 pornographic movie Deep Throat, which became the most profitable film of all time. Heart of the Beholder (2005) tells the story of a video rental store owner who battled censorship. Good Morning, Vietnam (1987) deals with a military disc jockey who battles his superiors over the content of his radio show. Talk Radio (1988) focuses on a radio talk show host abrasively using his freedom to express himself.

Many movies feature candidates and others freely exercising political speech. All the King’s Men (1949 and 2006) has as a premise how effective political oratory can lead to political power. Malcolm X (1992) presents some of the civil rights leader’s fiery rhetoric. The classic Mr. Smith Goes to Washington (1939) glorifies the use of the filibuster, a legislative tactic relying on the Senate’s tradition of unlimited speech.

In The American President (1995), a chief executive uses speech making to pursue his political goals. In a climatic scene, President Shepherd discusses the challenges of freedom of speech: “You want free speech? Let’s see you acknowledge a man whose words make your blood boil who is standing center stage and advocating at the top of his lungs that which you would spend a lifetime opposing at the top of yours.” The War Room (1993), a documentary about the 1992 presidential election, provides a glimpse into the effective oratory of Bill Clinton as a Democratic candidate.

Political speech, however, is not unfettered. The Candidate (1972) depicts how modern campaigns seek to package office seekers, and in doing so control what they say and how they say it. Silver City (2004) shows a grammatically challenged candidate who relies heavily on television advertising. From the late 1940s to the early 1960s, Hollywood studios blacklisted, that is, refused to employ, persons who had allegedly or actually expressed support for communism or attended meetings of ”subversive” organizations. A number of movies, including The Front (1976), Guilty by Suspicion (1991), Cradle Will Rock (1999), and The Majestic (2001), deal with blacklisting.

Hollywood has produced quite a few movies celebrating freedom of the press and the political power wielded by the media. Films focusing on newspapers and the reporters who work for them include The Front Page (1931), Deadline USA (1952), and The Paper (1994). Citizen Kane (1941) — often ranked by film scholars as the greatest American movie — presents a fictionalized version of the life of newspaper magnate William Randolph Hearst.

Two reporters for the Washington Post are lionized in All the President’s Men (1976), which recounts how the duo helped uncover the Watergate scandal. Conversely, Absence of Malice (1982) tells the story of the problems caused when a newspaper gets a story wrong, and Shattered Glass (2003) concerns a real-life reporter who fabricated parts of his stories. In Meet John Doe (1941), a newspaper seeking to boost its circulation inadvertently helps spark a political movement. Reporters also play important political roles in Foreign Correspondent (1940), His Girl Friday (1940), and L.A. Confidential (1997).

Film has also explored television’s role in free speech. Good Night, and Good Luck (2005) exalts famed journalist Edward R. Murrow, who used his CBS news program to take on Sen. Joseph McCarthy in 1954. In Medium Cool (1968), a fictional television journalist interacts with real people in Chicago at the time of the tumultuous 1968 Democratic National Convention. Network (1976) shows a television network capitalizing on an anchor’s on-air ravings to attract more viewers. Broadcast News (1987) explores the business and personal pressures of the television news business. In The Insider (1999), a producer for the CBS show 60 Minutes battles corporate bosses who want to kill a story for business reasons. Outfoxed: Rupert Murdoch’s War on Journalism (2003), a documentary, charges that the Fox News Channel has a conservative bias.

Court has affirmed that the First Amendment protects movies

Numerous cases before the Supreme Court have affirmed that First Amendment protections cover movies as well as printed materials. In Burstyn v. Wilson (1952), the Court first ruled that film constituted a form of expression entitled to First Amendment protection. In that decision, the justices ruled that the First Amendment prohibited the censoring of the movie The Miracle as sacrilegious. Rulings in Paris Adult Theatre I v. Slaton (1973) and other cases have determined that like distributors of obscene materials, those who distribute movies may be subject to laws regulating obscenity and pornography under the tests established in Miller v. California (1973).

This article was originally published in 2009. Mark Byrnes is Provost and Professor of Political Science at MTSU. He has taught and written on a range of topics related to American government, including a course on politics and film.