By Chris Demaske
Other articles in General Legal Concepts and Theories 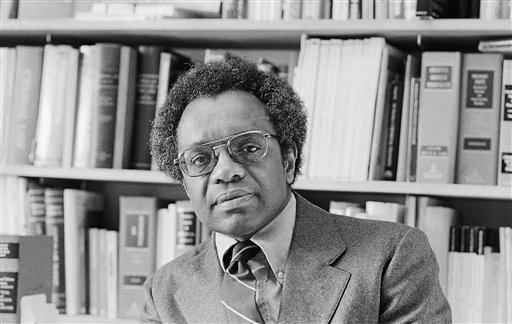 Professor Derrick Bell of the University of Washington Law School shown in his office January 30, 1980.  His philosophical writings in the 1970s and early 1980s led to the development of the critical race theory. (AP Photo, used with permission from The Associated Press)

Critical race theory (CRT) is a movement that challenges the ability of conventional legal strategies to deliver social and economic justice and specifically calls for legal approaches that take into consideration race as a nexus of American life.

CRT has its underpinnings in the philosophical writings of Derrick Bell in the 1970s and early 1980s. It was born out of the realization by legal scholars, lawyers, and activists that many of the advances of the civil rights era had stopped and in some circumstances were being reversed.

Some of the basic tenets of CRT rest on the belief that racism is a fundamental part of American society, not simply an aberration that can be easily corrected by law; that any given culture constructs its own social reality in its own self-interest, and in the United States this means that minorities’ interests are subservient to the system’s self-interest; and that the current system, built by and for white elites, will tolerate and encourage racial progress for minorities only if this promotes the majority’s self-interest.

CRT scholars have critiqued many of the assumptions that they believe constitute the ideology of the First Amendment. For example, instead of helping to achieve healthy and robust debate, the First Amendment actually serves to preserve the inequities of the status quo; there can be no such thing as an objective or content neutral interpretation in law in general or of the First Amendment in particular; some speech should be viewed in terms of the harm it causes, rather than all speech being valued on the basis of it being speech; and there is no “equality” in “freedom” of speech.

In terms of the First Amendment, the primary battlefield for CRT has been hate speech regulation. No one legal definition exists for hate speech, but it generally refers to abusive language specifically attacking a person or persons based on their race, color, religion, ethnic group, gender, or sexual orientation.

Hate speech is currently still protected by the First Amendment. CRT scholars have critiqued this protection and the ideology driving it. Early on, these scholars focused primarily on the question of hate speech codes on college campuses and later moved on to review laws and court opinions concerning the broader societal regulation of hate speech.

In general, these scholars argue that there is no societal value in protecting speech that targets already oppressed groups. They also question the logic of using the First Amendment to protect speech that not only has no social value, but also is socially and psychologically damaging to minority groups.

Perhaps the most well known and certainly the most prolific CRT scholar on hate speech is Richard Delgado, a founding member of the CRT movement who began publishing on hate speech in the early 1980s. On CRT’s connection to the First Amendment, Delgado states, “Until now, the following argument has been determinative: the First Amendment condemns that; therefore it is wrong. We are raising the possibility that the correct argument may sometimes be: the First Amendment condemns that, therefore the First Amendment (or the way we understand it) is wrong” (Delgado 1994: 173). He questions the old axiom that the answer to disfavored speech is more speech, noting that power relationships might make it difficult or impossible for members of socially disempowered groups to respond to certain types of speech.

Following the Supreme Court’s ruling in R.A.V. v. St. Paul (1992), which seemingly closed the door on hate speech regulation, Delgado continued to publish extensively on the legality and necessity of hate speech regulation. Relying heavily on social scientific data, Delgado outlined the harm caused by racist speech and developed a tort action for racial insults that he believes could pass First Amendment scrutiny.

Mari Matsuda and Charles Lawrence are two more early CRT proponents of hate speech regulation. Matsuda suggested the creation of a legal doctrine to limit hate speech in cases where the message is one of racial inferiority, the message is directed against a historically oppressed group, and the message is persecutorial, hateful, and degrading.

This article was originally published in 2009. Chris Demaske is an associate professor of communication at the University of Washington Tacoma. Her research explores issues of power associated with free speech and free press and has covered topics including hate speech, academic freedom, and Internet pornography.