By Sara L. Zeigler
Other articles in General Legal Concepts and Theories 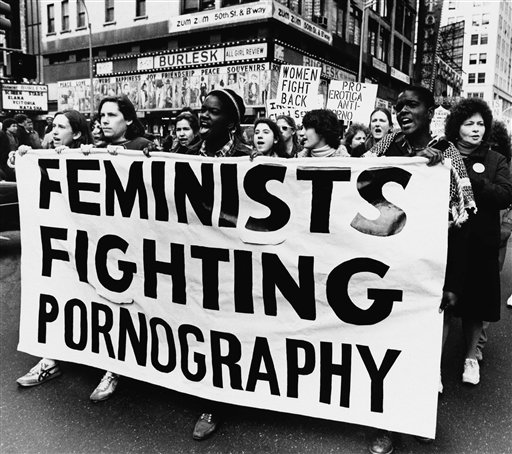 In this photo, nearly 200 women and men march through New York City in 1984 protesting pornography. Feminist views on pornography have at times challenged traditional First Amendment doctrine by emphasizing theories of equality over free expression. (AP Photo/Nancy Kaye, used with permission from the Associated Press)

Feminist theory is not readily categorized as a single branch of political thought. Although writings that could be characterized as “feminist” or embodying the perspectives and experiences of women have appeared throughout time, the history of Western feminist theory usually begins with the works of Mary Wollstonecraft (1759–1797), one of the first feminist writers in the liberal tradition.

The most familiar works continue in that liberal tradition, arguing that women should enjoy the same political and economic rights as men, including rights to speech, religion, bodily autonomy, and political expression.

Feminist radicalism gained prominence in the 1970s and 1980s

Feminist theory grew significantly in the 1970s and 1980s, with a surge in scholarly attention to the role of gender in shaping every aspect of the human experience. During this period, feminist radicalism gained scholarly prominence, with particular emphasis on the work of feminist legal scholar Catharine MacKinnon.

MacKinnon adopted an “anti-subordination” approach to theory, contending that those laws, policies, and practices that subordinated women needed to be eliminated. In contrast to liberal feminism, which sought to bring women into a position of equality with men within the existing legal framework, MacKinnon’s work rejected the existing framework as hopelessly representative of the male norm.

Her jurisprudence focused on results rather than process and on ending the subordination of women (and other marginalized groups such as homosexual men and the transgendered) to men. MacKinnon authored ground-breaking work on how sexuality-reinforced male domination and sexual harassment were a form of sexism. This work influenced the current legal understanding of hostile and intimidating environments.

MacKinnon’s collaborative work with Andrea Dworkin on an aspect of this problem — pornography — resulted in an intense debate among feminists about the role of freedom of speech in reinforcing women’s subordination and the shortcomings of First Amendment jurisprudence on obscenity in curtailing the very real harms of pornography.

MacKinnon and Dworkin argued that pornography contains a powerful political message of male dominance, and that it, by objectifying women and eroticizing their subordination, perpetuates real harm against women.

Not only does it encourage rape by implying that women enjoy forcible sex, but it also conveys the message that every woman, regardless of her abilities or role in society, is a sexual object designed primarily for the pleasure and use of men. In short, the argument is that pornography dehumanizes women and that its pervasiveness in society makes it impossible for women to combat patriarchy or fight subordination.

MacKinnon and Dworkin drafted an ordinance designed to restrict pornography not as obscenity, but on the grounds that it reinforced the subordination of women and encouraged violence against them. To proponents of the radical feminist view on pornography, the argument that the material might have some other value was irrelevant, because the harm to over half the population outweighed other considerations.

The city of Indianapolis adopted the ordinance, which was promptly challenged. Feminists weighed in on both sides, with many supporting the position advocated by civil liberties groups that the speech right should take precedence, even if that speech conveyed a profoundly sexist message.

The challenge, American Booksellers Assn. v. Hudnut, was heard by the 7th U.S. Circuit Court of Appeals in 1985. The court held that the ordinance was unconstitutional, because it proscribed speech that would not be considered “obscene” under the three-pronged test established in Miller v. California (1973).

In fact, MacKinnon and Dworkin took issue with obscenity law, their primary argument being that pornography did serve an underlying social and political purpose: to reinforce patriarchal control of women. Because they argued that the speech was, indeed, political, and because the ordinance quite openly restricted the speech based on its objectionable content, the ordinance clearly ran afoul of the Miller test and First Amendment jurisprudence generally. The Miller test only removed “prurient” speech from First Amendment protection, and thus acknowledgment that the Indianapolis ordinance sought to ban a particular type of political speech ensured that it would be overturned.

However, MacKinnon and Dworkin were attempting to reconceptualize legal theory, not to craft an ordinance that would meet the requirements of the Miller test.

Modern feminists take a variety of positions on pornography

Feminists take a variety of positions on the role of pornography in American society and on the theories advanced by MacKinnon and Dworkin. Some of the more extreme claims — that all heterosexual sex is rape because women cannot provide meaningful consent in the context of a patriarchal society — are jarring to mainstream heterosexual feminists.

Some of them claim that the theories portray women as perpetual victims and fail to recognize the many gains realized by liberal feminists, working with the existing legal system. Most mainstream feminists take positions consistent with conventional liberal principles — that the speech must be permitted, however deplorable its content.