By Clyde E. Willis
Other articles in Reformers 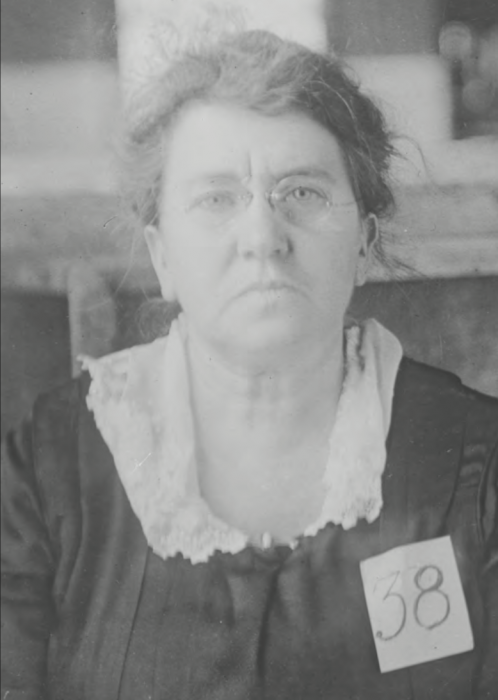 In 1919 Russian-born feminist and anarchist Emma Goldman was deported from the United States following Congress's enactment of the Anti-Anarchist Act, which permitted the deportation of aliens. She was a thorn in the side of mainstream American society in the early part of the 20th century. She traveled constantly, delivering vitriolic speeches, lecturing, picketing, marching, and demonstrating for First Amendment rights.(Emma Goldman's deportation image via Wikimedia Commons, public domain)

Emma Goldman (1869–1940), a Russian-born anarchist, socialist, and feminist, was a thorn in the side of mainstream American society in the early part of the 20th century. She traveled constantly, delivering vitriolic speeches, lecturing, picketing, marching, and demonstrating for First Amendment rights.

She advocated free speech, free love, birth control, women’s equality, and the right of labor to organize. She fought against anti-syndicalism laws, the military draft, and American intervention in the Russian Revolution.

Throughout her childhood in tsarist Russia and eastern Europe, Goldman witnessed anti-Semitic atrocities and maltreatment of peasants. Escaping an arranged marriage, she immigrated to the United States in 1885, a young woman imbued with anti-tsarist radicalism.

Finding much in the United States that disappointed her sense of justice for the disadvantaged, she began a lifetime of revolutionary activities that frequently ended with her arrest. Goldman was at times an editor and a contributor to Mother Earth, an anarchist publication active from 1906 until it was suppressed in 1917 under the Espionage Act, which made it a criminal offense to criticize the U.S. government. She was one of the defendants in the landmark case Abrams v. United States (1919). She wrote several books, including Anarchism and Other Essays (1910) and Living My Life (1931).

Although most of Goldman’s arrests, usually under state anti-syndicalism laws, did not result in her being incarcerated, she spent considerable time in prison. She was convicted and sentenced to one year in prison for inciting a riot in New York City following an 1893 speech to a mass demonstration of unemployed women at Union Square. She urged her audience: “If they do not give you work, demand bread. If they deny you both, take bread.”

In September 1901 police authorities claimed that President William McKinley’s assassin, Leon Czolgosz, had been inspired by one of Goldman’s lectures. Goldman was arrested in Chicago and interrogated but released.

Frequently subjected to official harassment, she was arrested in January 1903 for being a “suspicious” person. Four years later she was arrested for making “incendiary” speeches, a charge that did not get past the grand jury. In 1916 Goldman was convicted of violating a New York law that forbade lecturing on forbidden medical questions (birth control). She paid a fine and continued to lecture on the subject. Later that year she was arrested again, found guilty, and sentenced to 15 days in jail when she refused to pay another fine.

Goldman deported for her anarchist activities

Goldman’s fight against the Selective Service Act enacted by Congress in 1917 got her into serious trouble with federal authorities. Speaking against the military draft in New York, she stated, “We believe in violence and we will use violence.”

Arrested, along with fellow anarchist Alexander Berkman in New York less than a month after the enactment of the act, the two were found guilty of conspiracy against the draft and received the maximum two-year sentence and a $10,000 fine. After she was convicted, the postal authorities denied Mother Earth second-class mailing privileges.

While Goldman was in prison, Congress enacted the Anti-Anarchist Act, which permitted the deportation of aliens. Soon afterward, Goldman was served with a warrant for her arrest and deportation. In December 1919 Goldman, along with Berkman and 247 other anarchists, set sail for the Soviet Union.

In 1921, disenchanted with the Soviet Union, she became a British citizen through marriage and later wrote a memoir of her Soviet experience called My Disillusionment in Russia. In 1934 Goldman was granted a U.S. visa to make a nonpolitical speaking tour.

When the Spanish Civil War began in 1936, she wrote on behalf of an anarcho-syndicalist group. Goldman died in Canada.