By Julie Lantrip
Other articles in Heads of Organizations or Founders 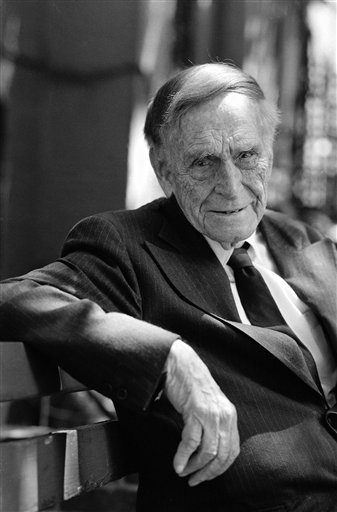 Roger Baldwin, founder of the ACLU, is pictured at home in New York's Greenwich Village in 1978. He served as executive director fo the organization from 1920-1950. (AP Photo/Jerry Mosey, used with permission from The Associated Press.)

While at Harvard College, Baldwin volunteered as an instructor for adult education classes for low-income workers, thereby launching his social work. He then headed west to Missouri, accepting, on the advice of family friend Louis D. Brandeis, an offer from Washington University to teach sociology and to work at a settlement house in St. Louis.

There, he soon became prominent in the social work community and active in leading reform movements such as the settlement house movement, African American rights groups, and good government leagues.

Baldwin's group investigated by government for work with conscientious objectors

During World War I, Baldwin directed the American Union Against Militarism (AUAM) in St. Louis and later served as AUAM secretary in New York.

The government investigated the group for its work in behalf of conscientious objectors. In 1918 Baldwin himself was called up for military service, but, to demonstrate his solidarity with wartime resisters, he refused to serve and was sentenced to a year in prison. After his release, he married prominent journalist and feminist Madeleine Z. Doty, whom he later divorced.

Under Baldwin’s 30-year tenure as the first executive director of the ACLU, the organization quickly earned a reputation for defending the civil liberties of some of the most controversial members of society. In some of its earliest cases, the ACLU provided legal support for anarchists Nicola Sacco and Bartolomeo Vanzetti, and in the Scopes monkey trial (Scopes v. State [Tenn. 1925], [Tenn. 1927]) it defended the right to teach evolution.

Baldwin also led the ACLU as it spurred many landmark First Amendment cases, including the extension of First Amendment prohibitions against censorship to the states in the Supreme Court cases Gitlow v. New York (1925) and Stromberg v. California (1931), as well as the victory over attempts to censor James Joyce’s Ulysses in the Second Circuit case United States v. One Book Entitled “Ulysses” (1933).

Outside his work at the ACLU, Baldwin was criticized for his involvement in socialist causes and his praise for the Soviet Union in his book Liberty under the Soviets (1928).

However, after the Soviets signed the 1939 German-Soviet Nonaggression Pact with the Nazis, Baldwin lost faith in communism, and his later work called for human rights in Soviet bloc countries.

This article was originally published in 2009. Julie Lantrip is the Honors Program Director at Tarrant County College - Northwest Campus.