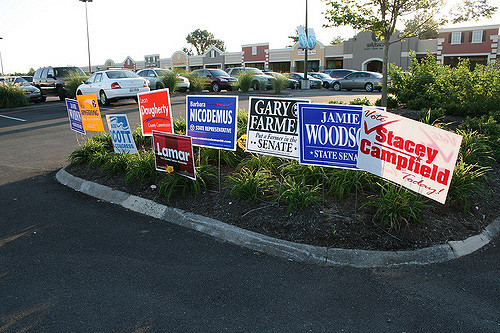 In Burson v. Freeman (1992), the Supreme Court upheld a Tennessee regulation that did not allow campaigning with 100 feet of the entrance to polling places. (Photo by Brendan Loy of campaign signs during the 2008 general election in Knoxville, via Flickr, CC BY-NC 2.0)

The Supreme Court in Burson v. Freeman, 504 U.S. 191 (1992), upheld a Tennessee law that provided for a 100-foot “campaign free zone” around the entrance to polling places. It is one of the few cases in which a law limiting speech successfully survived strict scrutiny.

Mary Rebecca Freeman had successfully challenged the law in question before the Tennessee Supreme Court as an infringement of First Amendment rights of free speech.

Justice Harry A. Blackmun, in the plurality opinion, began by recognizing that the decision in Mills v. Alabama (1966) had invalidated a state law prohibiting an editor from telling electors how they should vote on election day. Tennessee’s law regulated political speech in a public forum based on its content. Blackmun recognized that each of these considerations meant that the Court must subject the law to “exacting scrutiny”: finding a “compelling state interest” that is “narrowly drawn to achieve that end.”

Tennessee cited two compelling interests: “protecting the right of its citizens to vote freely for the candidates of their choice” and seeing that elections were “conducted with integrity and reliability.”

Blackmun accepted both, tracing the long history of influence and corruption that had preceded the widespread U.S. adoption of the Australian (secret) ballot. Blackmun observed that all 50 states had regulations limiting access to areas surrounding polling places designed to battle “voter intimidation and election fraud.”

He further rejected other challenges to the law:

Responding to a criticism that Justice John Paul Stevens made in dissent, Blackmun further denied that his analysis confused “history with necessity,” stating that history clearly validated a zone around polling places.

Freeman had challenged the size of the boundary, believing it should be smaller, but Blackmun denied that the state had to show that the law was “perfectly tailored” to its objective. Shorter boundaries would constitute “a difference only in degree, not a less restrictive alternative in kind.”

Justice Anthony M. Kennedy’s concurring opinion focused on content-based laws. He thought this was a case in which freedom of expression had to yield to accommodate the right to vote.

In a separate concurring opinion, Justice Antonin Scalia argued that the sidewalks around polling places were not a “traditional public forum.” He considered the laws to be “a reasonable, viewpoint-neutral regulation of a nonpublic forum.”

Justice Stevens’ dissent, joined by Justices Sandra Day O’Connor and David H. Souter, argued that Tennessee had not shown that its law was narrowly tailored to meet the compelling interest needed to limit classic political expression.

Stevens noted that other states had successfully achieved the same objective with zones of 50 feet or less and questioned whether the same restrictions should be required outside the polling places as inside.

Stevens accused the Court of confusing “history with necessity” and mistaking “the traditional for the indispensable.” Regulations that proved necessary in the late 19th century, when politics was far different, were not necessarily needed today.

Focusing on the fact that Tennessee allowed speech in the zones not related to campaigning, he thought such content-based distinctions called for higher scrutiny than the state could meet. Stevens viewed the “hubbub of campaign workers outside a polling place” not simply as a “nuisance” but as “the sound of a vibrant democracy.”

A number of subsequent lower court decisions have limited the application of state laws regulating exit polling, in some cases permitting no restrictions on such polling beyond 25 feet of the voting booth.