By Caryn E. Neumann
Other articles in Scholars 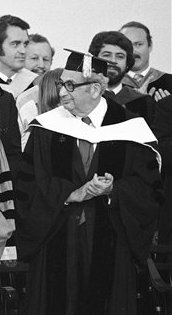 Paul Abraham Freund (1908–1992), a law professor at Harvard University, was one of the most respected constitutional scholars of the twentieth century. Freund played a critical part in the movement to better protect the individual liberties of speech and press in the First Amendment. Freund is pictured here in 1977. (AP Photo/JWG, used with permission from the Associated Press)

Paul Abraham Freund (1908–1992), a law professor at Harvard University, was one of the most respected constitutional scholars of the twentieth century.

Freund was a lawyer in the Solicitor General's Office.

Born in St. Louis, Missouri, Freund earned a bachelor’s degree from Washington University in 1928 and a bachelor of law degree from Harvard in 1931 and doctorate in law from Harvard in 1932. He began his legal career with a stint as law clerk to Supreme Court Justice Louis D. Brandeis, leaving in 1933 to serve in the federal Reconstruction Finance Corporation. In 1935 Freund joined the U.S. Solicitor General’s Office. He advocated interpreting the Constitution to give Congress more freedom to experiment with measures to end the Great Depression and provide a safety net against economic setbacks.

In 1939 Freund joined the faculty of Harvard Law School as a lecturer who specialized in conflict of laws and constitutional law. A year later, he became a professor and held three endowed chairs successively. Considered by his colleagues to be one of the most respected professors at Harvard Law School, Freund viewed law as akin to art in that both had imperfections. He advised observers of the Court to appreciate the complexities of judging before leveling criticism. In his teachings, he emphasized balance and justice. Freund played a critical part in the movement to better protect the individual liberties of speech and press in the First Amendment.

Meanwhile, he authored On Understanding the Supreme Court (1949) and On Law and Justice (1968). He also for a time served as editor-in-chief of the multivolume History of the Supreme Court. In 1962 Freund made President John F. Kennedy’s list of possible Court nominees. He retired in 1976.