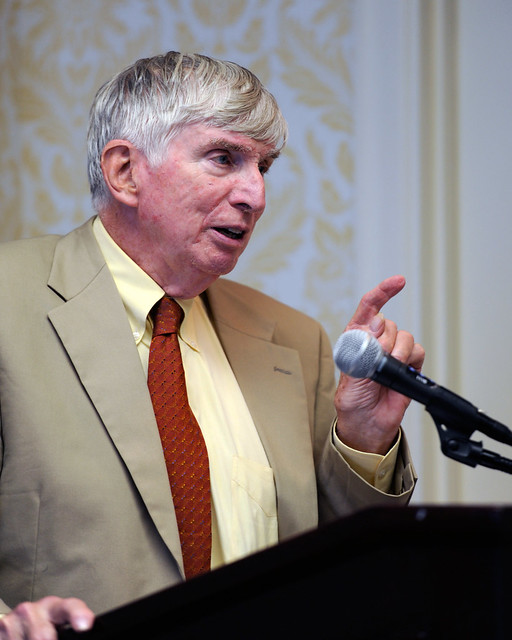 Robert O'Neil was an authority on First Amendment issues, writing several books and amicus curiae briefs on First Amendment cases that reached the Supreme Court. He also was the founding director of the Thomas Jefferson Center for the Protection of Free Expression. In this 2010 photo, he leads a discussion of the threats to academic governance posed by the Supreme Court’s 2006 decision in Garcetti v. Ceballos and by subsequent lower court rulings. (Photo by Photo by Michael Ferguson, via Flickr CC BY-NC-SA 2.0)

Robert M. O’Neil (1934-2018) an authority on First Amendment issues, was a lawyer, professor, and the founding director of the Thomas Jefferson Center for the Protection of Free Expression.

In 1985 O’Neil became the president of the University of Virginia, a position he held until 1990, when he became the founding director of the Thomas Jefferson Center for the Protection of Free Expression. The organization, which advocates on behalf of free expression issues, has close ties to the university.

O'Neil also was the founding chairman of the Virginia Coalition for Open Government, which advocates for access to public records.

O’Neil has written numerous books related to the First Amendment.

Throughout his academic career, O’Neil taught classes on the First Amendment. He died Sept. 30, 2018 at age 83.