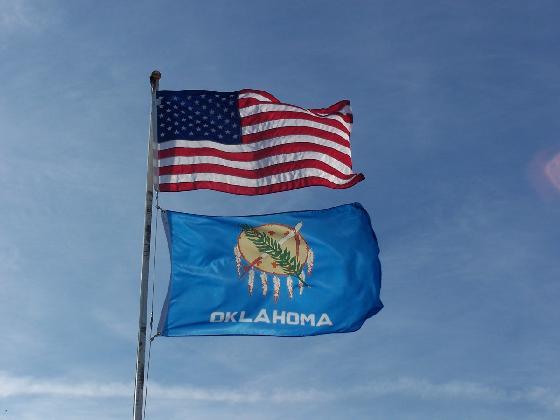 A 2005 ruling by the Supreme Court upheld Oklahoma's law requiring semi-closed primaries for political parties. The Libertarian Party of Oklahoma had wanted to invite anyone it wanted to participate in its primaries, and claimed the law violated the First Amendment right to association. The decision in Clingman v. Beaver departed from a line of earlier Supreme Court cases that had consistently sided with political parties' right of association. Justice Clarence Thomas, who wrote the opinion, said the state had an interest in preventing "party raiding" and "sore losers" candidacies. (Photo of the Oklahoma flag by J. Stephen Conn via flickr, licensed CC BY-NC 2.0.)

In Clingman v. Beaver, 544 U.S. 581 (2005), the Supreme Court held 6-3 that Oklahoma’s interest in preserving the integrity of state parties as a viable interest group superseded the parties’ interest in opening their primary elections to members of an opposing party.

Libertarian Party wanted to to open its primary

The Libertarian Party of Oklahoma (LPO) had challenged the state’s semi-closed primary law, arguing that as a private organization, it could invite whomever it wanted to participate in its elections; the law therefore violated its First Amendment right to association.

Justice Clarence Thomas, in the opinion for the Court, asserted that if the LPO allowed anyone to vote in its primary, it could make itself vulnerable to fielding candidates “hostile to the political preferences of the majority of the LPO’s members.” He also argued that the state had an interest in preventing “party raiding” and “sore losers” candidacies.

The Court reasoned that if one of the major parties had an uncontested primary election, large blocks of voters from that party might switch to the LPO to vote for the candidate most likely to siphon votes from their opponent in the general election.

The Clingman decision departed from an earlier line of cases that had consistently sided with political parties’ right of association.

In Tashjian v. Republican Party of Connecticut (1986), the Court ruled that the state could not prevent political parties from inviting independents to vote in their primaries.

Justice John Paul Stevens highlighted this tension in his dissenting opinion, arguing that if political parties can invite independents into their process, they surely should be able to invite members of other parties as well. He also noted that if the state cannot force parties to allow certain people to participate, the state should not be able to prevent parties from inviting them in either.

This article was originally published in 2009. Matthew Manweller was a Professor at Central Washington University.