By Sandra Thomas
Other articles in Religious Perspectives and Churches 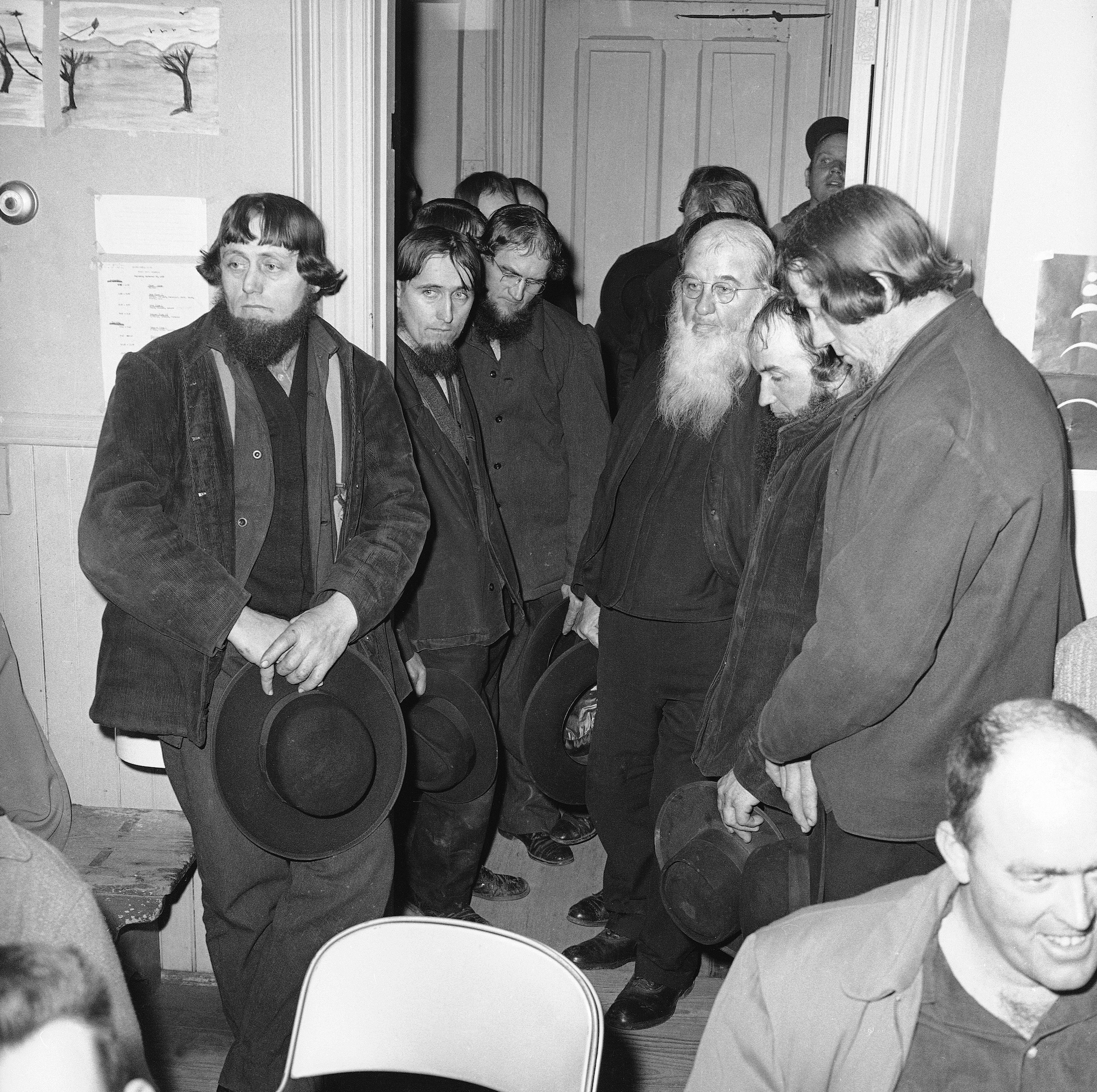 In this photo, Amish fathers group around their spokesman, Aaron Beiler, second from right, in Morgantown, Pennsylvania on March 16, 1960, as they await the constable to take them to jail in West Chester, Pennsylvania. They were to serve five days in prison for violating the state’s compulsory school attendance law by refusing to send their children to public schools. The Supreme Court ruled in 1972 that the First Amendment includes the right to keep children out of high school. (AP Photo/Paul Vathis, used with permission from The Associated Press)

The pacifism and effort of the Amish and Mennonites to separate themselves from worldliness have led to a number of important legal precedents relative to the First Amendment.

Like some other religious minorities, both groups have contributed to American pluralism.

Beginning in the fourth century, Christianity went from being a persecuted movement to the only official religion tolerated in the Roman Empire. The Roman Catholic Church, after 1517, began losing its moral and political authority in parts of Europe. Martin Luther, a Wittenberg-based monk and lecturer in Germany, proposed changes to church structure as well as to key church doctrines that split Christianity first into Catholics and Protestants before the latter in turn split into numerous groups.

One group of dissenters in Zurich believed that the church should be a community of Christians voluntarily committed to Christ and each other. Rather than baptizing infants, they held that only adults who chose to join this fellowship could be baptized.

Because Christ taught peaceful nonviolence and nonresistance to the world’s enemies, they argued that Christians could not participate in the military or judicial arms of the state. In January 1525, these dissenters met and baptized one another, thereby signaling their conscious decision to follow Christ and to establish a church apart from the state.

They wanted this second baptism—in Latin anabaptismus—because they felt their infant baptisms had been meaningless.

Temporal rulers believed that such challenges to the unity of the church tore at the fabric of society, the Anabaptists’ rejection of the state’s authority in matters of religion threatened anarchy, and resisting military service left the state vulnerable to foreign attack. Anabaptists therefore faced imprisonment and exile, fines, threats, and even state-sanctioned death.

In 1527 the Anabaptists met on the Swiss-German border to define their church, agreeing upon several foundational points for church life and practice. They advocated excommunication and barring from fellowship any who fell into unrepentant sin.

In 1534 a group of Anabaptists captured the city of Münster and began to persecute and punish anyone who refused to be baptized as an adult. In 1536 Menno Simons, a former Dutch Catholic priest, spoke out against the violence in Münster and joined a nonviolent group of Anabaptists. These Mennonites, as they were called, placed more emphasis than earlier Anabaptists on rejection of sin in the church and separation of believers from those who had left the church.

As the Mennonite church grew, it became more lenient.

At the close of the seventeenth century, Jakob Amman, a Swiss elder, called for reform in church life. In particular, he proposed more frequent communion services, which would require members to be more conscientious because participation in communion required a close examination of their Christian lives and relationship with God.

This issue divided the church between the Amish — those who followed Amman — and other Mennonites, who sided with Elder Hans Reist, who had balked at the idea of implementing this new practice and did not believe in social shunning of erring members as a way of bringing them back to the church.

Toward the middle of the nineteenth century, the more progressive among the Amish developed a close fellowship with the Mennonites, while the more conservative Amish concerned themselves with traditional understanding of the Ordnung (“old order”).

In accordance, the progressive Amish would come to be referred to as Amish Mennonites and the conservative Amish were called Old Order Amish.

Religious freedom was a prime reason the Amish and Mennonites crossed the Atlantic, with the first Mennonites migrating to North America in 1683.

William Penn, who had received land that would become Pennsylvania, offered parts of it to Quakers, Mennonites, and Amish for settlement. This colony would be built on religious tolerance.

Amish immigration began in earnest in 1737. The Amish and Mennonites continued to fight for religious freedom after arriving in the United States.

The French and Indian War and the American Revolution called upon them to bear arms, which they opposed and for which they faced persecution.

They found reprieve centuries later with passage of the Universal Military Training and Service Act of 1958, which “exempts from combatant training and service in the armed forces of the United States those persons who by reason of their religious training and belief are conscientiously opposed to participation in war in any form.”

These groups also found themselves in legal trouble over educating their children.

Most contemporary compulsory education laws require children to attend school until 16 years of age, but the Amish felt an eighth-grade education adequate for their simple needs and lifestyle.

The Supreme Court ruled in Wisconsin v. Yoder (1972) that the First Amendment’s free exercise of religion clause included the right to keep children out of high school.

Amish and Mennonites have been involved in other First Amendment cases

Mennonites found protection in many cases involving Jehovah’s Witnesses, such as West Virginia State Board of Education v. Barnette (1943), which cited the free speech clause to prohibit compulsory flag salutes in public schools.

Amish believe in providing for members of their own communities, and the Supreme Court has exempted individual Amish from paying Social Security taxes. In United States v. Lee (1982), however, the Court ruled that this exemption did not apply to Amish who employed others.

Despite the 21st century pressures of tourism and repeated conflict with government, the Amish and Mennonites have remained a remarkably resilient people.

This article was originally published in 2009. Sandra Thomas is the Director of the library at Southeastern Oklahoma State University.