By Clyde E. Willis
Other articles in Religious Perspectives and Churches 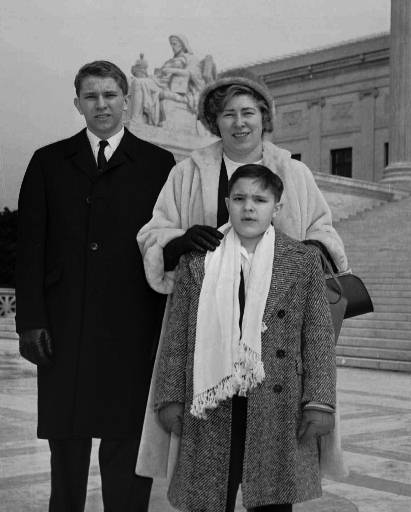 Madalyn Murray O'Hair and her two sons, William, 16, and Garth, 8, pose in 1963 in front of the Supreme Court. Ms. O'Hair was an atheist whose lawsuit led to the landmark 1963 Supreme Court decision outlawing public school prayer. Atheism is protected by the First Amendment. (AP Photo, reprinted here with permission from The Associated Press)

The relationship between atheists and the First Amendment is a curious one.

Atheism must be treated like a religion under the First Amendment

In other words, governments must treat atheism like a religion for purposes of the First Amendment.

Status of atheism as a religion results in convolution

Take for example a statement by Judge Diane Wood, of the 7th U.S. Circuit Court of Appeals, in Kaufman v. McCaughtry (7th Cir. 2005), a case involving a warden’s denial of an atheist’s (Kaufman’s) application to organize a religious organization in the prison: “Atheism is Kaufman’s religion, and the group that he wanted to start was religious in nature even though it expressly rejects a belief in a supreme being.”

The philosophy underpinning the inclusion of atheists within the establishment clause’s ambit is elucidated in an oft-quoted comment from Lynch v. Donnelly (1984) by Sandra Day O'Connor.

O'Connor, in a concurring opinion, stated that the “Establishment Clause prohibits government from making adherence to a religion relevant in any way to a person’s standing in the political community ... [A] direct infringement [of the clause would be a] government endorsement or disapproval of religion.

A unanimous Court solidified the establishment clause’s application to the nonreligious in the opinion written by Justice Hugo L. Black for Torcaso v. Watkins (1961).

In that decision, the Court struck down a Maryland Declaration of Rights provision designed to bar anyone who refused to declare a belief in God from holding a public office.

Justice Black stated: “We repeat and again reaffirm that neither a State nor the Federal Government can constitutionally force a person to profess a belief or disbelief in any religion. Neither can [they] constitutionally pass laws or impose requirements which aid all religions as against nonbelievers, and neither can [they] aid those religions based on a belief in the existence of God as against those religions founded on different beliefs.”

Alabama case: Right to select any religion or none at all

A quarter century after Torcaso, the Court reaffirmed its position in an opinion by Justice John Paul Stevens, writing for the Court in Wallace v. Jaffree (1985). That case involved an Alabama statute authorizing a one-minute moment of silence in all public schools for meditation or voluntary prayer.

Stevens wrote, “At one time it was thought that [the establishment clause] merely proscribed the preference of one Christian sect over another, but would not require equal respect for the conscience of the infidel, the atheist, or the adherent of a non-Christian faith such as Islam or Judaism.

"But when the underlying principle has been examined in the crucible of litigation, the Court has unambiguously concluded that the individual freedom of conscience protected by the First Amendment embraces the right to select any religious faith or none at all.”

With Justice William H. Rehnquist arguing that the First Amendment, from its inception in the House of Representatives in 1789, “did not mean that the Government should be neutral between religion and irreligion [sic],” Justice Stevens asserted that “the political interest in forestalling intolerance extends beyond intolerance among Christian sects — or even intolerance among ‘religions’ — to encompass intolerance of the disbeliever and the uncertain.”

Although a judicially generated legal definition of atheism may not be easily forthcoming, the Seventh Circuit — like other courts — has at least proffered a definition of religion that includes atheism.

According to the Kaufman court, “when a person sincerely holds beliefs dealing with issues of ‘ultimate concern that for her occupy a place parallel to that filled by ... God in traditionally religious persons, those beliefs represent her religion.”

In short, the courts have held that the establishment clause is equally applicable to the nonreligious and even the anti-religious. As the 7th Circuit stated, “[A]theism may be considered, [only] in this special sense, a religion.”

This article was originally published in 2009. Clyde E. Willis (1942-2017) worked an attorney for 25 years before starting a second career as a professor. He taught political science for 18 years at Middle Tennessee State University. He wrote the Student's Guide to Landmark Congressional Laws on the First Amendment.