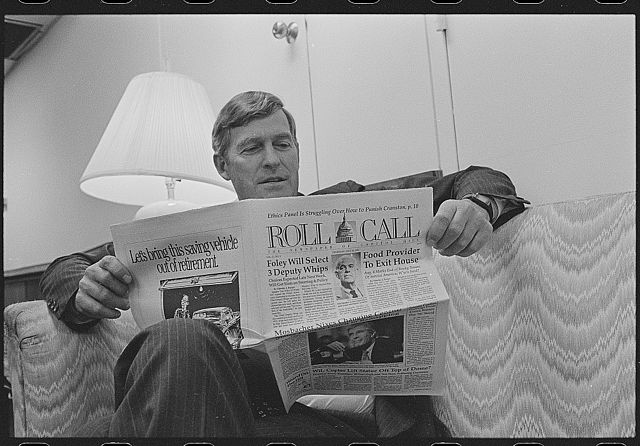 The Supreme Court case that decided that limits on uncoordinated and independent campaign spending by political parties were unconstitutional began after the Republican Party ran ads against Timothy Wirth. Wirth was the likely Democratic challenger in a 1986 Senate race. He eventually won. Here, he is pictured in 1991 reading Roll Call. (Image via Library of Congress, public domain)

In Colorado Republican Federal Campaign Committee v. Federal Election Commission, 518 U.S. 604 (1996), also known as Colorado Republican I, a Supreme Court plurality declared as unconstitutional provisions of the Federal Election Campaign Act of 1971 (FECA) limiting the amount of independent, uncoordinated expenditures (made by a political party without coordination with its candidate) on behalf of a specific candidate.

In April 1986, the Republican Party of Colorado purchased radio airtime to run commercials attacking Timothy Wirth, the likely Democratic challenger in the 1986 U.S. Senate race. The Republicans did so before having selected their own nominee. The Democratic Party lodged a complaint with the Federal Election Commission (FEC) arguing that the expenditure violated FECA spending limitations on the amount of money that parties could spend on such advertisements.

Pursuant to the complaint, the FEC brought action against Colorado Republican officials. Following a district court decision favoring the Republican Party on the narrow grounds that its expenditures in this instance were not covered by the law, the case reached the Tenth U.S. Circuit Court of Appeals, which took a broad view of the provision and thus largely sustained its constitutionality. The Supreme Court reviewed the matter, to consider whether the provision facially, or as applied, violated the First Amendment, and found it unconstitutional.

Court noted no evidence of link between independent spending and corruption

Authoring the plurality opinion, Justice Stephen Breyer began by noting the previously recognized distinction between independent expenditures on behalf of candidates and direct contributions to them. In specific, he noted, “the Court has concluded that limitations on independent expenditures are less directly related [than are direct contributions] to preventing corruption. ... ” Breyer wrote that the government offered no evidence or legislative findings suggesting a link between corruption and independent expenditures by political parties. Instead, the Court felt that the provision was created for the purpose of reducing perceived wasteful campaign spending.

Although the FEC sought to maintain differential treatment for political parties, the Court plurality argued that it is illogical to grant “individual candidates and ordinary political committees the right to make unlimited independent expenditures” and then “deny the same right to political parties.” The plurality also rejected the Colorado Republican Party’s claim that a party exception should be crafted in First Amendment jurisprudence forbidding the regulation of coordinated as well as independent expenditures.

Separate opinions filed by Justices Anthony M. Kennedy and Clarence Thomas, and joined by Chief Justice William Rehnquist and Justice Antonin Scalia, challenged the views of the plurality. Kennedy argued that FECA runs afoul of the First Amendment when it restricts a political party’s spending in consultation with its candidates. Thomas went further, arguing that the provision of FECA at issue not only was unconstitutional in this case but also facially violated the First Amendment.

This article was originally published in 2009. Daniel M. Katz is a Professor of Law at the Chicago-Kent College of Law.