By Thurman Hart
Other articles in Religious Perspectives and Churches 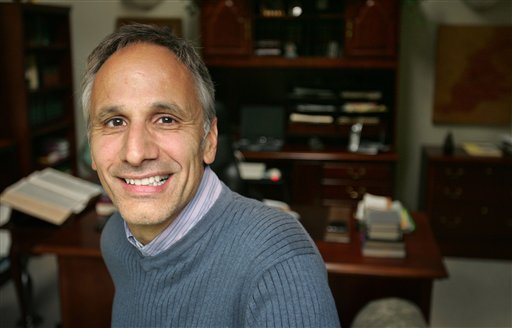 Christian Science practitioner Mark Unger poses for a portrait in his home, Tuesday, Aug. 29, 2006, in Ashland, Mass. In the case of Christian Scientists and others who opt for alternative care either out of personal preference or religious belief, the state has to decide if health care always equals medical care. Christian Scientists want to be sure the state recognizes spiritual healing as credible health coverage. (AP Photo/Steven Senne, with permission from The Associated Press)

Christian Scientists — members of the Church of Christ, Scientist — are a denomination that teaches healing through prayer, rather than traditional medicine and medical therapies.

This belief has resulted in a number of legal cases against parents of sick children for failing to secure proper medical treatment for them. (Similar cases have reached the courts involving Jehovah’s Witnesses who refuse blood transfusions for their children.)

An exact accounting of the number of practitioners is unknown because the Boston-based church is prohibited from publishing membership figures by the Manual of the Mother Church, rules for internal governance written by Mary Baker Eddy, who founded the church in 1879.

The concept of healing through prayer is derived from Eddy’s insistence that a person’s body is not real. Therefore sickness cannot truly exist. Rather, illness is a symptom of false thoughts. Prayer is the vehicle by which the mind rejects such thoughts and, when aligned properly with the Divine Mind, will allow full healing to occur. To learn to heal through prayer, a believer must go through a church-approved training course in metaphysical prayer healing.

Precedents have generally established the right of adults to make their own medical decisions, but courts are less reluctant to endorse such choice when it might result in harm to children.

Due in large part to the 1967 conviction of Dorothy Sheridan of Cape Cod on charges of involuntary manslaughter for not seeking medical attention for her five-year-old daughter, the church lobbied to obtain an exemption from state medical neglect laws in Massachusetts. An exemption was granted in 1971 and currently remains on the books.

In 1983 the Department of Health, acting on directions from Congress, moved to make passage of such measures voluntary. In the absence of a federal ruling, the extent to which members can be held accountable for failure to seek medical attention has devolved to the states, whose courts have issued controversial and contradictory rulings.

Parents convicted for child neglect in refusing to seek treatment

The issue publicly resurfaced in 1984 with the death of Robyn Twitchell in Massachusetts. After the two-year-old died of an obstructed bowel, her parents were charged, and eventually convicted, of involuntary manslaughter through neglect.

Rather than risk the judgment being upheld on appeal and becoming legal precedent, the church chose not to appeal, which would have been based on its contention that the parents were technically exempt from such prosecution because of their religious teachings.

William and Christine Hermanson of Florida were charged and convicted of felony child abuse and third degree murder for refusing to administer insulin to their daughter, a diagnosed diabetic, who died in 1986. The state supreme court quashed their convictions, however, on the grounds that legal authorizations for religious exemptions contradicted each other to the extent that a “common person” could not adequately determine his or her responsibility under the law.

In contrast, California’s high court exhibited a different proclivity in ruling on the consolidated cases of Laurie Walker, Elliot and Lisa Glaser, and Mark and Susan Rippberger, all charged and convicted separately in the deaths of their respective children.

In reviewing Walker v. State of California in 1988, the state supreme court ruled that practitioners of prayer healing bore the burden of determining when they were no longer protected under their religious exemption.

Thus far, the U.S. Supreme Court’s only action in this arena has not been favorable to the Christian Scientists.

In 1993 Minnesota courts awarded Douglas Lundman $1.5 million in compensatory damages for the death of his son while in the care of his former wife, a Christian Scientist; the church appealed the decision.

In rejecting the case, the Court wrote, “Although one is free to believe what one will, religious freedom ends when one’s conduct offends the law by, for example, endangering a child’s life.”