By James C. Foster
Other articles in Journalists 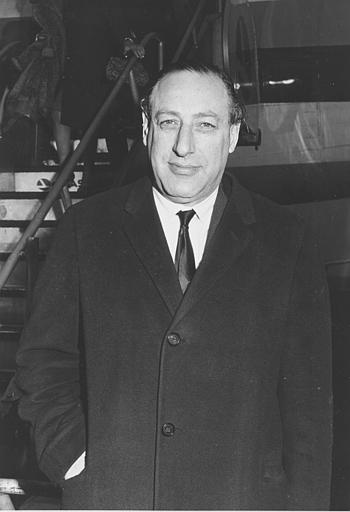 Fred W. Friendly, pictured here in 1966, was an early innovator of broadcast journalism. He was known in his later years for his seminars on the media and pressing contemporary public issues and for his writings on the First Amendment.  (AP Photo, used with permission from the Associated Press)

Fred W. Friendly (1915–1998), an early innovator of broadcast journalism, was known in his later years for his seminars on the media and pressing contemporary public issues and for his writings on the First Amendment. A close collaborator of broadcaster Edward R. Murrow, Friendly has been overshadowed by his iconic colleague. Friendly is sometimes even confused — inaccurately — with the Murrow “Boys” — that is, the two “generations” of talented CBS journalists Murrow recruited to cover World War II.

Notwithstanding Fred Friendly’s relatively low profile, he has a towering reputation, in his own right, for journalistic integrity.

Friendly was born Ferdinand Friendly Wachenheimer in New York City. The producer at his first job, at radio station WEAN in Providence, R.I., gave him the moniker Fred Friendly. Friendly began broadcasting in 1937, a daily program he created called Footprints in the Sands of Time. Likely the first radio documentary — precursor to the television documentary format he and Murrow later invented —  Footprints employed clips of historical figures to tell their biographies.

Friendly’s library of almost a thousand biographies led to his initial collaboration with Murrow, a series of historical phonograph records called I Can Hear It Now for Columbia Records.

Beginning in 1950, Friendly and Murrow worked together at CBS for 11 fruitful years. It is not hyperbole to say that the two of them invented broadcast news.

I Can Hear It Now evolved into the radio program Hear It Now, and then into See It Now. This trailblazing television news program aired from November 1951 until July 1958. Although best known for unmasking Sen. Joseph R. McCarthy during the height of Cold War "Red scare" hysteria (1948–1955), See It Now also was notable for its technical inventiveness, such as split-screen interviews and remote feeds, and for its engaging content, which brought faraway places and newsmakers into American homes.

Friendly’s tenure at CBS lasted five years longer than Murrow’s, but they both left to protest the increasing commercialization of the medium. Famously, Friendly resigned in 1966 as president of CBS News to protest the network’s decision to rerun an episode of I Love Lucy instead of broadcasting the Senate Foreign Relations Committee hearings into the U.S. involvement in Vietnam. As he observed the following year, “Television makes so much at its worst that it can’t afford to do its best.”

After leaving CBS, Friendly began a second successful career as a journalism professor and seminar leader. His first job after leaving CBS was to work with Ford Foundation president McGeorge Bundy to formulate early plans for the birth of the Public Broadcasting System (PBS). Friendly continued this work after his appointment as Edward R. Murrow Professor of Broadcast Journalism at Columbia University.

Friendly’s contributions to PBS included content. Born of his interactions with Columbia students, his Media and Society Seminars brought together public figures, journalists, law professors, and judges on-camera. They were given a hypothetical situation “so agonizing that they can escape only by thinking,” as Friendly described the Socratic-like exchanges. After his death in 1998, the gatherings were renamed the Fred Friendly Seminars.

Friendly authored several books on First Amendment issues, including The Good Guys, the Bad Guys and the First Amendment: Free Speech versus Fairness in Broadcasting (1976), which dealt with the fairness doctrine, and Minnesota Rag: The Dramatic Story of the Landmark Supreme Court Case That Gave New Meaning to Freedom of the Press (1982), which examined press freedom.