By John R. Vile
Other articles in Judges and Justices 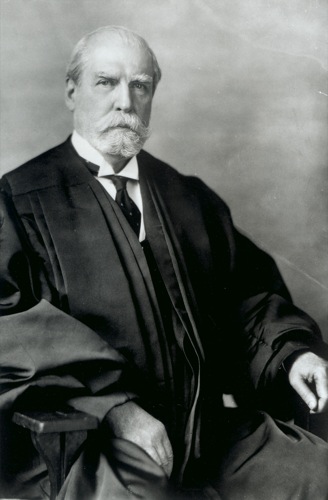 Charles Evans Hughes was on the Supreme Court twice in his career. He retired the first time in 1916 to run against Woodrow Wilson. He was then appointed as chief justice in 1930. Hughes generally ruled favorably on behalf of civil liberities, especially First Amendment freedoms. (Image via The Collection of the Supreme Court of the United States)

Charles Evans Hughes (1862–1948) served on the Supreme Court twice during his career, the second time as chief justice.

He generally supported relatively broad protections for First Amendment freedoms and left a legacy of judicial integrity and strong leadership that helped preserve judicial independence in a time of crisis.

The son of a pastor, Charles Hughes graduated from Brown University and Columbia Law School. Between 1881 and 1910, he practiced law privately and taught briefly at Cornell University (1881–1883). He then returned to private practice, which he eventually combined with teaching duties at New York Law School. In 1910, President William Howard Taft nominated him as an associate justice

In 1905 he entered politics, serving as governor of New York from 1907 until his appointment to the Supreme Court in 1910. He resigned in 1916 to run against Woodrow Wilson for the presidency. After an unsuccessful presidential campaign, he worked in various private and public capacities, most notably as secretary of state from 1921 until 1925. In 1930 President Herbert Hoover nominated him as chief justice.

As chief justice, Hughes distinguished himself as an able administrator.

During his tenure, the Court initially struck down many of President Franklin D. Roosevelt’s New Deal measures as interferences with property rights, but it then seemed to switch to a stance friendlier to the New Deal. Some attribute this change to Roosevelt’s Court-packing plan, in which he proposed to add an additional justice (up to fifteen) for each justice on the Court over the age of 70.

Hughes opposed Roosevelt’s plan, which might have seriously undermined the Court’s independence, by pointing out that the Court had not, as Roosevelt charged, fallen behind in its work. On the other hand, Hughes wrote the decision in West Coast Hotel Co. v. Parrish (1937), upholding the constitutionality of minimum-wage legislation. This decision is usually identified as the beginning of the Court’s change in attitude toward the New Deal.

Hughes generally ruled favorably on behalf of civil liberties, especially First Amendment freedoms. He wrote the Supreme Court’s path-breaking decision in Near v. Minnesota (1931), striking down a Minnesota law against scandal-sheets as an improper prior restraint of publication.

In De Jonge v. Oregon (1937), he wrote the opinion voiding an Oregon law that would have prevented a Communist party from forming and holding meetings.

In Stromberg v. California (1931), he wrote for the Court in striking down the conviction of a young woman for displaying a red flag. Stromberg was an important stage in the extension of the First Amendment to cover symbolic speech.

Hughes generally supported First Amendment religious freedoms. Although he wrote the decision upholding a parade permit requirement as applied to Jehovah’s Witnesses as a reasonable restriction in Cox v. New Hampshire (1941), he voided an ordinance in Lovell v. City of Griffin (1938) that required Jehovah’s Witnesses to obtain a permit before they could distribute literature.

He dissented from the Court’s decision in United States v. Macintosh (1931), denying naturalization to a selective conscientious objector. He did not, however, dissent from the Court’s decision in Minersville School District v. Gobitis (1940), later reversed, which upheld a law permitting children, in this case a Jehovah’s Witness, to be expelled from school for not saluting the American flag.

Hughes retired from the Court in 1941 and died seven years later.