By David L. Hudson Jr. (Updated October 2018)
Other articles in Judges and Justices 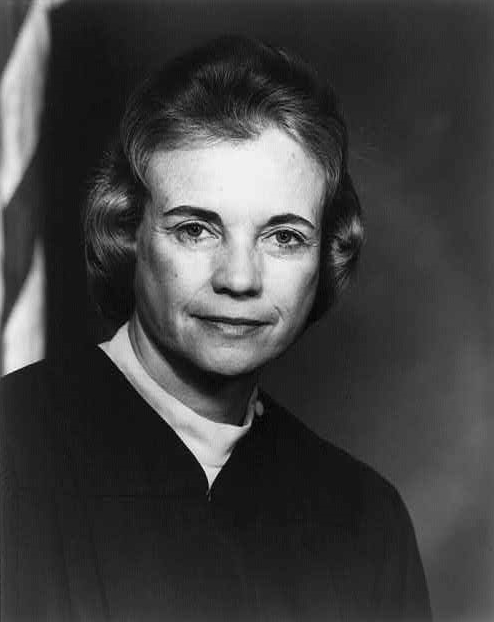 Sandra Day O’Connor (1930– ) was the first woman to be appointed to the Supreme Court, where she served from 1981 to 2006. She was often a key swing vote during her later years on the bench, causing some observers to label the Court during this period the O’Connor Court. In First Amendment law, she is best known for her opinions in the area of religious liberty.

Born in El Paso, Texas, O’Connor spent much of her childhood at the Lazy B Ranch in Arizona. Graduating from high school at age sixteen, she earned undergraduate and law degrees at Stanford University.

Even though she finished third in law school, O’Connor had difficulty finding a job because of gender discrimination. The only job offer she received was a position as a legal secretary. She became a deputy county attorney in San Mateo, California, in 1952. She married John O’Connor and lived in Germany for a few years while her husband fulfilled his service obligations.

After returning to Maricopa County, Arizona, Sandra O’Connor entered local politics. In 1965, she became an assistant attorney general, and in 1969, she was appointed to the Arizona State Senate to replace a departing member. She won reelection for two more terms. In 1974, she was elected to a trial court position in Maricopa County. Five years later, the governor appointed her to the Arizona Court of Appeals. In 1981, President Ronald Reagan announced O’Connor as his nominee for the Supreme Court, fulfilling a campaign promise to nominate a woman. The Senate confirmed her, 99-0.

In many of her opinions O’Connor showed a concern for religious liberty. In a concurring opinion in a creche display case, Lynch v. Donnelly (1984), she proposed the endorsement test as a “clarification of our Establishment Clause jurisprudence.” As she explained, endorsement of a religious belief “sends a message to nonadherents that they are outsiders, not full members of the political community.” The endorsement test became widely used by the Court in cases involving public religious displays or other expressive acts.

In her concurring opinion in Employment Division, Department of Human Resources of Oregon v. Smith (1990), she warned that the Court had gone too far in reducing the level of free exercise protection, a position she reaffirmed in her dissent in City of Boerne v. Flores (1997).

O’Connor delivered many of the Court’s majority or plurality opinions in a variety of First Amendment contexts, sometimes favoring and sometimes disfavoring First Amendment claims. She wrote the Court’s majority opinion in a tobacco advertising decision, Lorillard Tobacco Co. v. Reilly (2001), which invalidated various parts of Massachusetts’ restrictions on advertising based on either preemption or First Amendment grounds. She also wrote the Court’s opinion striking down restrictions on advertisements of compounded drug prices in Thompson v. Western States Medical Center (2002).

She extended free speech protection to independent contractors in Board of County Commissioners v. Umbehr (1996). In Simon and Schuster v. Members of the New York State Crime Victims Board (1991), she wrote for a unanimous Court in striking down a Son of Sam law that imposed financial penalties on authors who discussed their past crimes in their literary works. She struck down some portions of a Dallas licensing law on sexually oriented businesses in FW/PBS, Inc. v. City of Dallas (1990) and struck down a law that prohibited display of messages critical of foreign embassies in Boos v. Barry (1988).

O’Connor ruled that private-figure plaintiffs must prove that statements about public interest are false before recovering damages for defamation in Philadelphia Newspapers, Inc. v. Hepps (1986) and ruled that a tax that singled out the press violated the First Amendment in Minneapolis Star and Tribune Co. v. Minnesota Commissioner of Revenue (1983).

In other First Amendment opinions, O’Connor upheld laws or regulations from First Amendment challenges. She delivered key portions of the Court’s main opinion in McConnell v. Federal Election Commission (2003), which upheld most of the Bipartisan Campaign Finance Reform Act of 2002. In City of Erie v. Pap’s A.M. (2000) she upheld restrictions on nude dancing and rejected challenges to a requirement that the National Endowment for the Arts consider general standards of “respect and decency” when awarding grants in National Endowment for the Arts v. Finley (1998).

O’Connor upheld a 30 day ban on attorney solicitation letters in Florida Bar v. Went for It, Inc. (1995) and rejected a First Amendment challenge to a state sales tax that exempted certain types of media in Leathers v. Medlock (1991). She upheld the Equal Access Act of 1984 from an establishment clause challenge in Board of Education of the Westside Community Schools v. Mergens (1990). Her plurality opinion in Frisby v. Schultz (1988) upheld a Wisconsin law that banned residential picketing. Her majority opinion in Turner v. Safley (1987) rejected a challenge to a regulation limiting correspondence of prison inmates and lowered the standard for reviewing constitutional claims of inmates.

O’Connor announced her intended retirement at the end of the 2005 term, but she served until the appointment of Samuel A. Alito Jr., in 2006, after the death of Chief Justice William H. Rehnquist. Charles Haynes, an expert on religious liberty, said to the Associated Press (2005) upon O’Connor’s first announced retirement, “On religious-liberty issues, Justice Sandra Day O’Connor was more than just the swing vote — she was a voice of reason and moderation during a time when extremes often dominate the debate.”

In 2018, O'Connor announced she was in the beginning stages of dementia.